Telangana: The birth of a forward-looking state

Telangana is the country's youngest state and it has a lot to show for its successful economic policies. However, does it have enough to meet the challenges of the future which threaten its demographics and its largest industry? 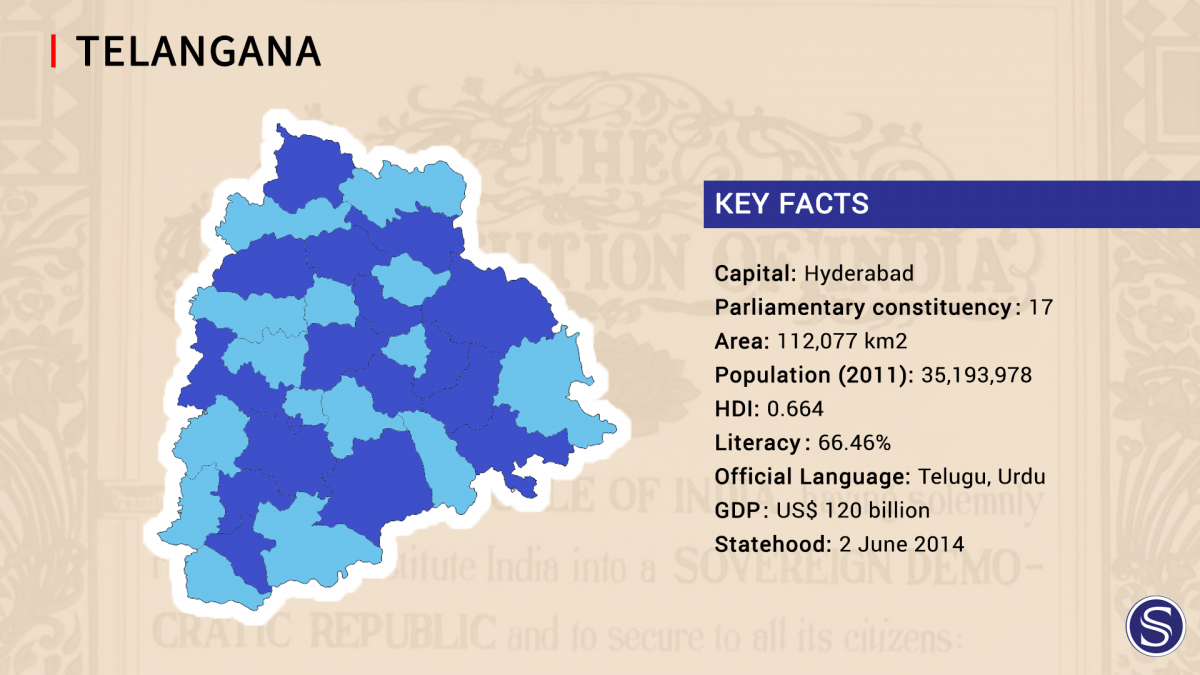 The Hyderabad state joined the Union of India in 1948 after an Indian military invasion. In 1956, the Hyderabad State was dissolved as part of the linguistic reorganisation of states and Telangana was merged with the Telugu-speaking Andhra State (part of the Madras Presidency during the British Raj) to form Andhra Pradesh. A peasant-driven movement began to advocate for separation from Andhra Pradesh starting in the early 1950s and continued until Telangana was awarded separate statehood on 2 June 2014.

The state of Telangana was officially formed on 2 June 2014. Kalvakuntla Chandrashekar Rao was elected as the first chief minister of Telangana, following elections in which the Telangana Rashtra Samithi party secured a majority. Hyderabad will remain as the joint capital of both Telangana and Andhra Pradesh for a period, not more than 10 years after that period Hyderabad shall be the capital of the State of Telangana and there shall be a new capital for the State of Andhra Pradesh. Andhra Pradesh picked Amaravati as its capital and moved its secretariat in 2016 and legislature in March 2017 to its new capital.

1) Education: the bifurcation of Andhra State led to Telangana retaining a majority of higher education institutions which were situated around the capital of Hyderabad. However, despite the existing of reliable, quality infrastructure, Telangana’s literacy rate is 66%, with women recording a rate of 57%. Primary school enrolment rates have not increased proportionally to the increase in per capita income since 2014. It is imperative for the state to push for universal primary education, and it is more pertinent as Hyderabad a major hub for global tech companies like Google and Microsoft, who are in need for qualified employees.

2) Energy: the state has numerous thermal power plants but has no corresponding investments in renewable energy. The state receives ample sunlight throughout the year, with mild monsoons, making it an ideal candidate for large scale integrated wind and solar farms. Telangana has retained a majority of the erstwhile Andhra state’s capital and infrastructure funds, and it is recommended that the state invests in the integration of renewable energy production into its power grid.

3) Economy: The economy of Telangana is mainly supported by agriculture. Two important rivers of India, the Godavari and Krishna, flow through the state, providing irrigation. Farmers in Telangana mainly depend on rain-fed water sources for irrigation. Rice is the major food crop. Other important local crops are cotton, sugar cane, mango and tobacco. Recently, crops used for vegetable oil production, such as sunflower and peanuts, have gained favour. There are many multi-state irrigation projects in development, including Godavari River Basin Irrigation Projects.

The state has also started to focus on the fields of information technology and biotechnology. Telangana is one of the top IT exporting states of India. There are 68 Special Economic Zones in the state.

Our assessment is that India’s youngest state has the potential to be the regional leader in education and services industry through job creation. We believe that it should gradually reduce its dependence on agriculture to cater to the rising demand in IT services, while simultaneously investing more to make the agriculture industry equipped with environment-friendly practices. We also feel that Telangana stands to benefit from a relatively young population and excellent education infrastructure, all it needs to do is support the creation of long-term, sustainable and high-paying jobs.