Sikkim has become India's leading advocate for organic farming and renewable energy, both of which are required in the onset of climate change. What does India's greenest state need to do to combat this threat? 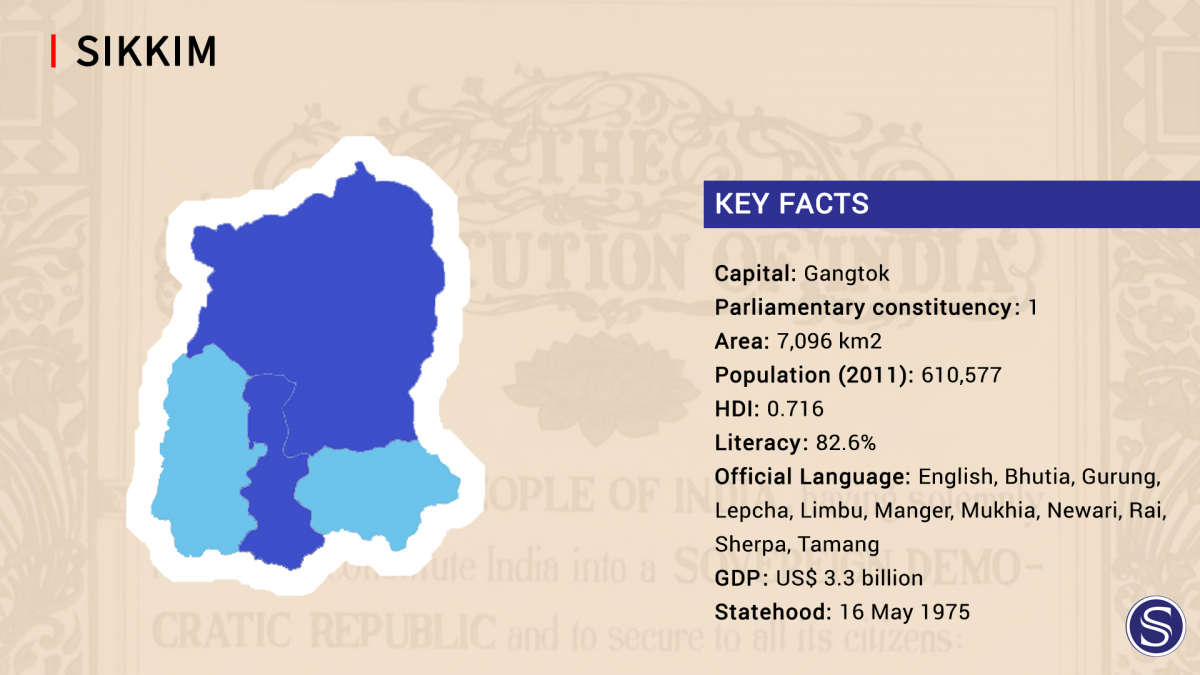 Prior to the Indian independence, Jawaharlal Nehru, as the Vice President of the Executive Council, pushed through a resolution in the Indian Constituent Assembly to the effect that Sikkim and Bhutan, as Himalayan states, were not 'Indian states' and their future should be negotiated separately. A standstill agreement was signed in February 1948.

The demand for the responsible government continued and the SSC launched a civil disobedience movement. The Chogyal Palden Thondup Namgyal asked India for help in quelling the movement, which was offered in the form of a small military police force and an Indian Dewan. In 1950, a treaty was agreed between India and Sikkim which gave the state the status of an Indian protectorate. Sikkim came under the suzerainty of India, which controlled its external affairs, defence, diplomacy and communications. In other respects, Sikkim retained administrative autonomy.

In 1975, the Prime Minister of Sikkim appealed to the Indian Parliament for Sikkim to become a state of India. In April of that year, the Indian Army took over the city of Gangtok and disarmed the Chogyal's palace guards. Thereafter, a referendum was held in which 97.5 percent of voters supported abolishing the monarchy, effectively approving Union with India. On 16 May 1975, Sikkim became the 22nd state of the Indian Union, and the monarchy was abolished.

1) Climate Change: Sikkim’s rich flora and fauna are vulnerable to climate change, with many of the species being endemic to the region being unable to adapt to a warmer climate. The state needs an action plan in place to actively counter rising global temperatures. Presently, the state has done a commendable job in the adoption of solar power and organic farming, but they are not sufficient to counter the cascading impacts of climate change.

2) Economy: Sikkim's nominal state gross domestic product (GDP) was estimated at US$1.57 billion in 2014 constituting the third-smallest GDP among India's 28 states. The state's economy is largely agrarian based on the terraced farming of rice and the cultivation of crops such as maize, millet, wheat, barley, oranges, tea, and cardamom. Sikkim produces more cardamom than any other Indian state and is home to the largest cultivated area of cardamom. To meet with the future economic challenges and to generate sustainable jobs, the state has to start diversifying into green economic initiatives. These initiatives promote the development of environment-friendly business solutions to commons problems. Therefore, they generate long term jobs while not exploiting or damaging the existing natural resources.

Our assessment is that Sikkim has few threats, but the primary adversary it will face in the coming future is climate change. We believe that the state can extend its organic farming program to include energy generation through renewable sources as a mandatory component of agriculture while promoting the establishment of more green economy businesses by means of tax breaks and other incentives.