Tripura is one of the most geographically isolated states in the country with a single national highway connecting it with the rest of the nation. Its land is fertile and its people are literate, so why is Tripura unable to cash in on its strengths? 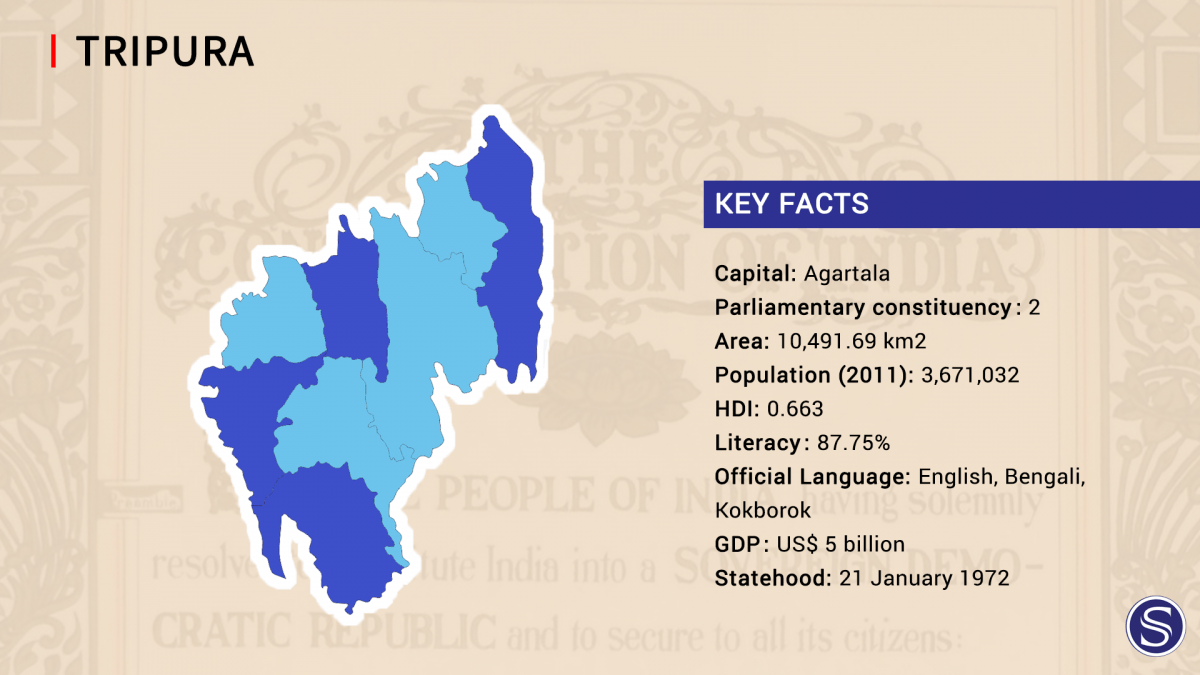 Following the independence of India in 1947, Tippera district – the estate in the plains of British India – became a part of East Pakistan, and Hill Tippera remained under a regency council until 1949. The Maharani Regent of Tripura signed the Tripura Merger Agreement on 9 September 1949, as a result of which Tripura became a Part C state of India. It became a Union Territory, without a legislature, in November 1956 and an elected ministry was installed in July 1963. The geographic partition that coincided with the independence of India resulted in major economic and infrastructural setbacks for the state, as road transport between the state and the major cities of India had to follow a more circuitous route. The road distance between Kolkata and Agartala before the partition was less than 350 km, and increased to 1,700 km, as the route now avoided East Pakistan. The geopolitical isolation was aggravated by an absence of rail transport.

Ethnic strife between the Tripuri tribe and the predominantly immigrant Bengali community led to scattered violence, and an insurgency spanning decades. This gradually abated following the establishment of a tribal autonomous district council and the use of strategic counter-insurgency operations. However, violence in the state has subsided since.

1) Economy: Tripura is geographically isolated, with a single national highway connecting it with the rest of the country. Economic activity is therefore subdued with limited investments, low job creation and dependence on agriculture for sustenance. However, due to hilly terrain and forest cover, only 27 % of the land is available for cultivation. The economy of Tripura can be characterised by high rate of poverty, low capital formation, inadequate infrastructure facilities, geographical isolation and communication bottlenecks, inadequate exploration and use of forest and mineral resources, slow industrialisation and high unemployment.

More than 50% of the population depends on agriculture for sustaining their livelihood. However, agriculture and allied activities to Gross State Domestic Production (GSDP) is only 23%, this is primarily because of the low capital base in the sector. The priority for the government has to be the greater integration of Tripura’s economy with the rest of the country, which should be able to transfer capital, skilled labour and other logistical facilities for the development of the state.

2) Infrastructure: as with the economy, Tripura’s infrastructure is minimal. There is an obvious geographic disadvantage for the state but it is devoid of critical economic and administrative infrastructure which has been stalling the development of the state. Additionally, it does not help that Tripura shares a long border with Bangladesh and a small contiguous border with the Indian states of Assam and Mizoram, which greatly limits the development and logistical capacity of the state.

Our assessment is that Tripura is in dire need of a new development package which prioritises the establishment of all-weather roadways, business development centres and educational institutions for professional degrees. We believe that Tripura has yet to realise its potential as a state in several industries and we firmly believe that Tripura’s sole Lok Sabha MP should focus on the upliftment of the state as a whole over party politics.