UP has caught the attention of the media for every election cycle. Whether it was for the intense campaigning or the unorthodox political candidates, the state has always caught the fancy of India. The elections in 2019 are no different and we're expecting a fight to the finish for UP's 80 Lok Sabha seats. However, will the dynamic duo of Narendra Modi-Amit Shah be able to replicate their 2014 heist of 71 seats or will the INC-led anti-BJP coalition make a dent in their final tally? 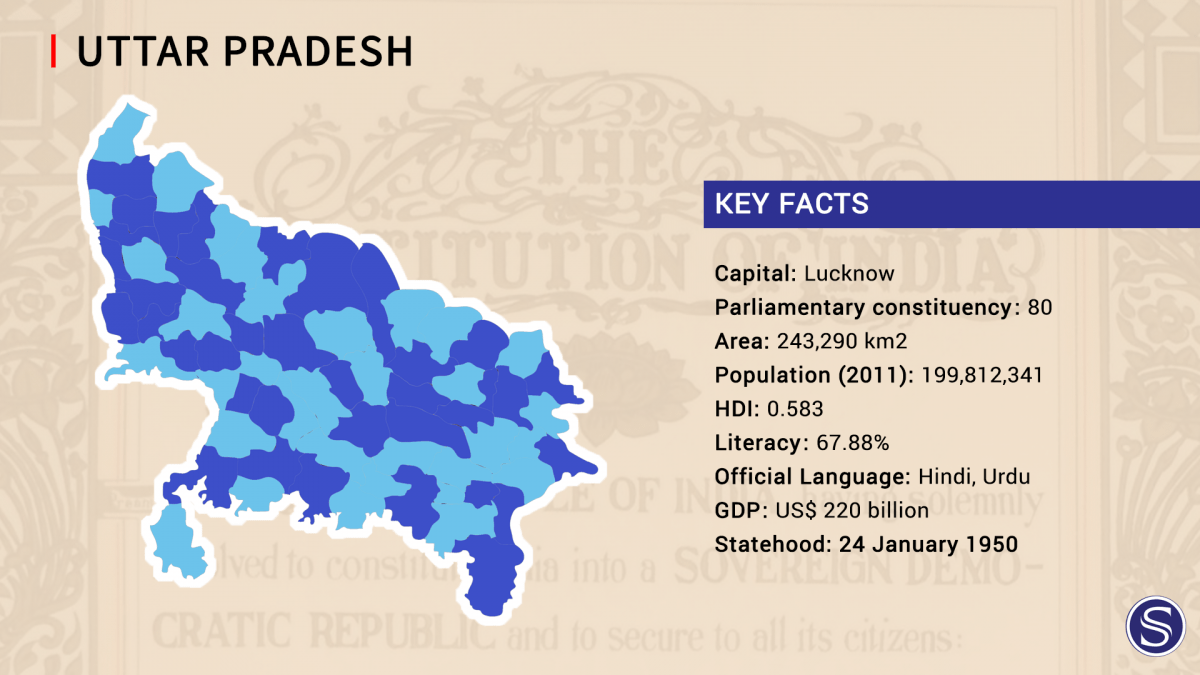 After India's independence, the United Provinces were renamed "Uttar Pradesh" ("northern province"), preserving UP as the acronym, notification regarding this was done in union gazette on 24 January 1950. The state has provided nine of India's prime ministers, including current Prime Minister Narendra Modi who is MP from Varanasi, which is more than any other state and is the source of the largest number of seats in the Lok Sabha. Despite its political influence since ancient times, its poor record in economic development and administration, poor governance, organized crime and corruption have kept it amongst India's backward states. The state has been affected by repeated episodes of caste and communal violence.

In 2000, northern districts of the state were separated to form the state of Uttarakhand.

1) Education: The problems of the state's education system are complex. Due to public apathy, public schools are run inefficiently. The Literacy rate of the state according to the 2011 Census is 70.69%. With the literacy rate for Males at 79.20%, while it is 59.30% for the Females, and is the second worst performing state in the country in terms of education, ranking ahead of only Bihar. Presently, there are 866,361 primary schools, 8,459 higher secondary schools, 758-degree colleges and 26 universities in the state. Some of the oldest educational institutions – founded by the British, the pioneer educationalists and other social/religious reformers – are still functional.

2)  Demographics: With over 200 million people, there is an average population density of 828 persons per km2. As of the 2011 census, Allahabad is the most populous district of Uttar Pradesh while Mahoba being the least populated. Only 3 districts of Jaunpur, Azamgarh, and Deoria have a sex-ratio greater than 1000 while Gautam Buddha Nagar stands lowest in the tally with a very low ratio of 851. On the contrary, Gautam Buddha Nagar scores highest in literacy rate at 80.12% and Kanpur Nagar 2nd at 79.54%, while both being the poorest districts in terms of sex-ratio, depicting a negative-correlation among literacy and sex-ratio in this case. Districts of Srawasti, Bahraich, and Balrampur haven't even crossed the 50% literacy mark yet. The sheer size and scale of the state give it many advantages but it also presents several complex issues which only make the existing education and sanitation problems worse.

3) Employment: The state has to produce jobs at an astonishing rate to keep up with its booming youth population. However, it has failed to generate long term sustainable employment opportunities and has recorded an increase in the unemployment levels over the past five years. UP needs to reform its largely informal economy to integrate new technologies, efficient business practices and to stimulate greater revenue generation.