Assam: The political battleground of the northeast

Assam is a state in Northeast India, situated south of the eastern Himalayas along the Brahmaputra and Barak River valleys. Assam covers an area of 78,438 km2. The state is bordered by Bhutan and the state of Arunachal Pradesh to the north; Nagaland and Manipur to the east; Meghalaya, Tripura, Mizoram and Bangladesh to the south; and West Bengal to the west via the Siliguri Corridor, 22 kilometres strip of land that connects the state to the rest of India.

The government of India, which has the unilateral powers to change the borders of a state, divided Assam into several states beginning in 1970 within the borders of what was then Assam. In 1963, the Naga Hills district became the 16th state of India under the name of Nagaland. Part of Tuensang was added to Nagaland. In 1970, in response to the demands of the Khasi, Jaintia and Garo people of the Meghalaya Plateau, the districts embracing the Khasi Hills, Jaintia Hills, and Garo Hills were formed into an autonomous state within Assam; in 1972 this became a separate state under the name of Meghalaya. In 1972, Arunachal Pradesh (the North East Frontier Agency) and Mizoram (from the Mizo Hills in the south) were separated from Assam as union territories; both became states in 1986.

Assam is known for Assam tea and Assam silk. The state has conserved the one-horned Indian rhinoceros from near extinction, along with the wild water buffalo, pygmy hog, tiger and various species of Asiatic birds, and provides one of the last wild habitats for the Asian elephant. The Assamese economy is aided by wildlife tourism to Kaziranga National Park and Manas National Park, which are World Heritage Sites. Sal tree forests are found in the state which, as a result of abundant rainfall, look green all year round. Assam receives more rainfall than most parts of India; this rain feeds the Brahmaputra River; whose tributaries and oxbow lakes provide the region with a hydro-geomorphic environment.

The post-1970s experienced the growth of armed separatist groups such as the United Liberation Front of Asom (ULFA) and the National Democratic Front of Bodoland (NDFB). In November 1990, the Government of India deployed the Indian army, after which low-intensity military conflicts and political homicides have been continuing for more than a decade. In recent times, ethnically based militant groups have grown. Panchayati Raj Institutions have been applied in Assam, after agitation of the communities due to the sluggish rate of development and general apathy of successive state governments towards Indigenous Assamese communities. 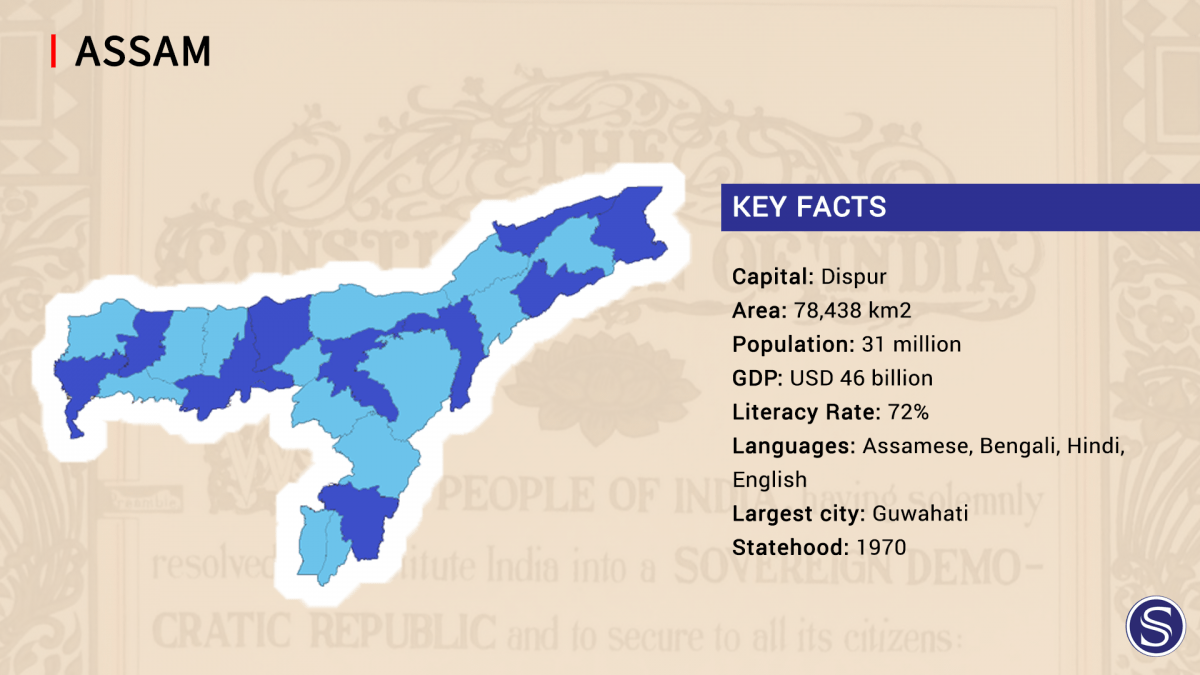 The largest North Eastern State in the country is a bellwether for economic growth and political stability in the region. Due to its geographic location, it is an extremely vital state for India’s security-related issues in the North East. Our assessment establishes the following risks Assam faces today which should be the talking points for voters before the Elections in May 2019:

1) Citizenship (Amendment) Act, 2016: Perhaps the biggest political factor that poses a potential risk for Assamese voters is the Citizenship (Amendment) Act, 2016 which has kicked up a storm in the region. The Citizenship (Amendment) Bill, 2016, the government plans to change the definition of illegal migrants. The Bill, introduced in the Lok Sabha on July 15, 2016, seeks to amend the Citizenship Act, 1955 to provide citizenship to illegal migrants, from Afghanistan, Bangladesh and Pakistan, who are of Hindu, Sikh, Buddhist, Jain, Parsi or Christian extraction. However, the Act doesn’t have a provision for Muslim sects like Shias and Ahmediyas who also face persecution in Pakistan.  The act has become controversial and its impact on the social fabric of the North East cannot be accurately predicted.

2) Environment: Assam is home to the endangered One Horned Indian Rhinoceros and countless other flora and fauna. The recent flooding in 2016 caused significant damage to the ecology of the state, including the deaths of many animals at the Kaziranga National Park. Assam’s most vulnerable aspect of public policy is it's less than optimal protection of the environment and the integration of sustainable technologies.

3) Infrastructure: As is the recurring risk in all North Eastern States, infrastructure is inadequate in Assam, especially for a state which connects the narrow Siliguri corridor with the rest of the country. Roads, bridges and airports are woefully under-developed, low quality and do not indicate any major investments in them. This is a major risk for Assam, which is generally known as the gateway to the North East, and a key state for the defence of border states in the region.