Karnataka has seen remarkable progress in all key HDI indicators as well as Economic indices but the major issues which still plague the state are very basic. The lack of Environmental conservation, unplanned urbanization and serious, long term reforms are stalling one of India's best-performing state. What are the key issues voters in Karnataka should consider before voting? 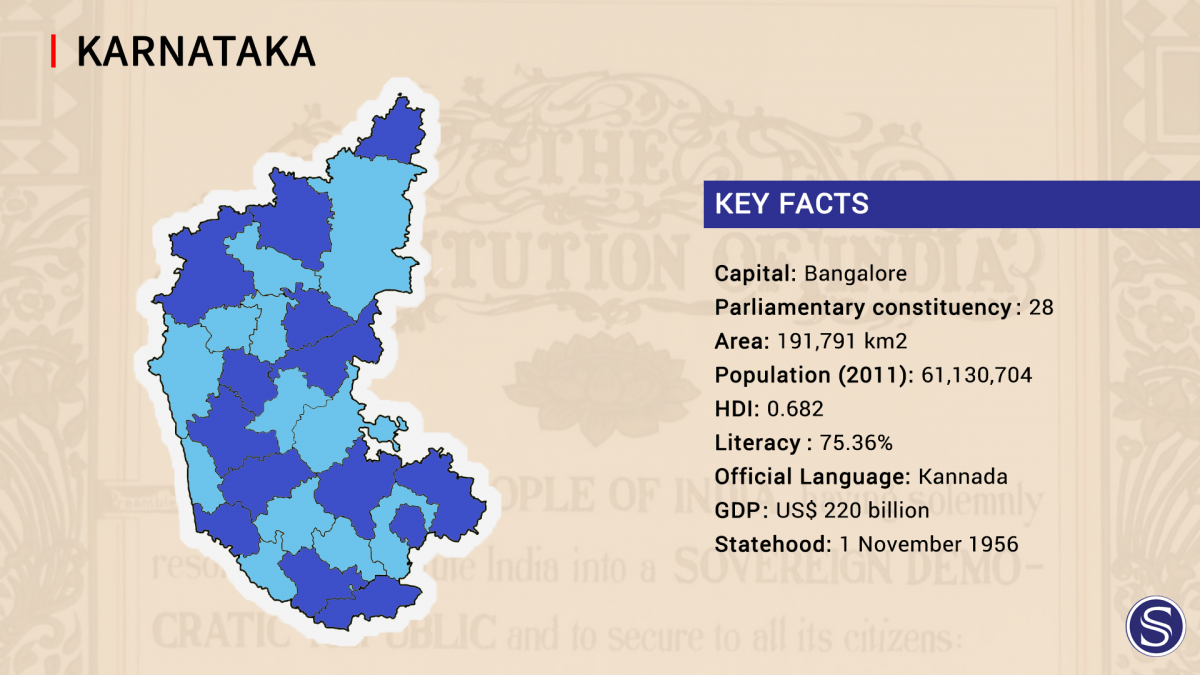 After India's independence, the Maharaja, Jayachamarajendra Wodeyar, allowed his kingdom's accession to India. In 1950, Mysore became an Indian state of the same name; the former Maharaja served as its Rajpramukh (head of state) until 1975. Following the long-standing demand of the Ekikarana Movement, Kodagu- and Kannada-speaking regions from the adjoining states of Madras, Hyderabad and Bombay were incorporated into the Mysore state, under the States Reorganisation Act of 1956. The thus expanded state was renamed Karnataka, seventeen years later, in 1973. In the early 1900s through the post-independence era, industrial visionaries such as Sir Mokshagundam Visvesvarayya, born in Muddenahalli, Chikballapur district, played an important role in the development of Karnataka's strong manufacturing and industrial base.

It has 28 Lok Sabha seats which swung towards several different factions over the years, including INC, BJP, JD(S) and minor local parties.

1) Environment: The state is blessed with diverse, robust wildlife as it hosts a large portion of the Western Ghats. The Kodava region is home to some of India’s rarest birds and trees whereas Biligiriranga Hills, which are the confluence of both the Eastern and Western Ghats, hosts over 800 species of vegetation and 254 species of birds. However, the recent government plans to build high voltage power cables through the Kodava region, the heartland of Coorg’s biodiversity hotspot has questioned the environmental conservation efforts of the state. Additionally, Karnataka has suffered from successive droughts in the Northern part of the state, yet the government has not instituted mandatory rainwater harvesting, promoted local water conservation efforts nor has it emphasized on restoring the low groundwater levels.

2) Tourism: The state ranked third in the country for tourism, but the revenues do not match the potential of Karnataka’s varied and diverse historic sites. The Golden Chariot is a fine example of catering to a limited crowd, whereas if the service could be emulated for Upper- and middle-income patrons, it would exponentially increase state revenues from tourism. In particular, Karnataka has the potential to be the leader in eco-tourism due to the abundance of wildlife reserves and biosphere hotspots. Bangalore’s status as the tech capital of the country invites people from all corners of the country which could be a strong base of modern, safe and cheap methods of ecologically-sensitive tourism.

3) Urbanisation: Karnataka is one of the fastest growing states in the country and its capital has seen break-neck speed urbanisation over the past decade. The problem of this is the disproportionate concentration of urban population in one city while the remaining cities and town do not attract sufficient urban growth. Urban planning is uncoordinated and the state government has not taken any measures to assist local administrations with zoning, title and revenue reforms of growing towns and cities.