Andhra Pradesh is the eighth-largest state in India, covering an area of 162,970 km2 (62,920 sq mi). As per the 2011 census, it is the tenth most populous state, with 49,386,799 inhabitants. The largest city in Andhra Pradesh is Visakhapatnam. Telugu, one of the Classical Languages of India, is the majority and official language of Andhra Pradesh.

The legislative assembly of Andhra Pradesh has passed 113 bills as of October 2018, of which the first 39 bills were amendments from the erstwhile unified Andhra Pradesh state (1956-2014). Chief Minister Chandra Babu Naidu has battled with low state revenues and the added cost of building a new capital from scratch has somewhat slowed the growth of the state.

The biggest asset of AP is its chance to build a planned and sustainable capital city from the blueprints. The biggest opportunity for the state is building an economy powered by renewable energy.  Andhra Pradesh has a coastline of 974 km (605 mi) – the second longest coastline among the states of India, after Gujarat – with jurisdiction over almost 15,000 km2 of territorial waters.

The state is made up of the two major regions of Rayalaseema, in the inland southwestern part of the state, and Coastal Andhra to the east and northeast, bordering the Bay of Bengal. The state comprises thirteen districts in total, nine of which are located in Coastal Andhra and four in Rayalaseema. The largest city and commercial hub of the state are Visakhapatnam, located on the Bay of Bengal, with a GDP of US$43.5 billion; the second largest city in the state is Vijayawada, located on the banks of the Krishna River, which has a GDP of US$3 billion (as of 2010). 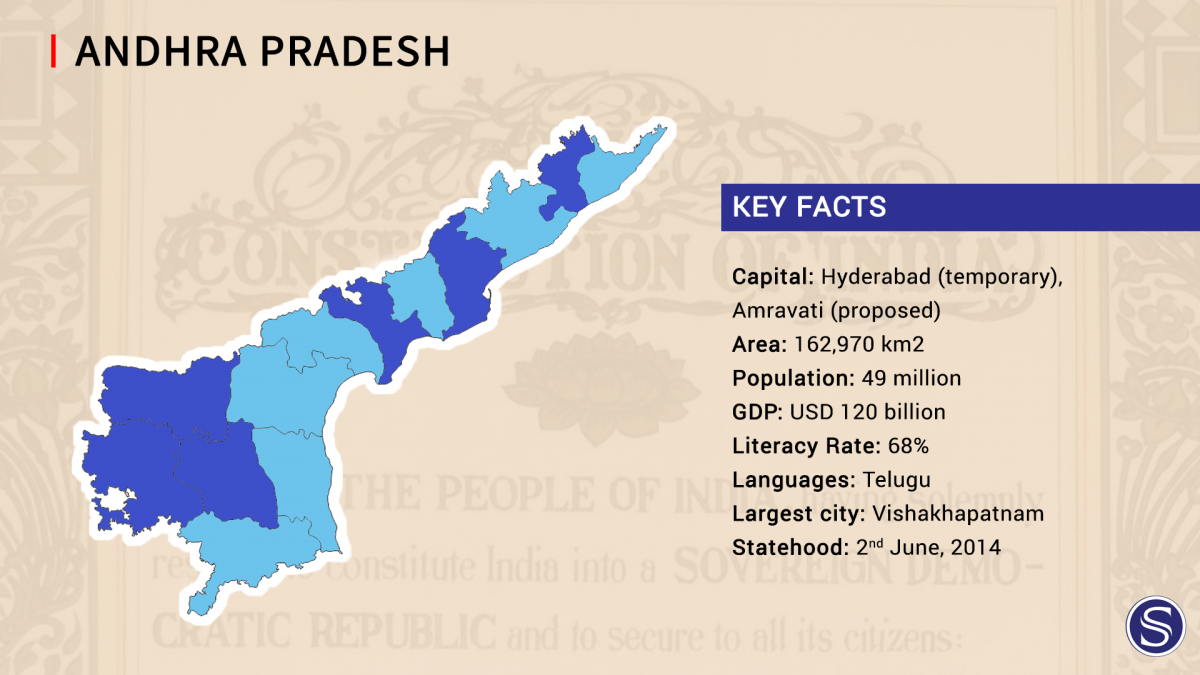 The joint-youngest state in the Union has to grapple with the challenge of building a new capital from the foundations apart from attracting new investments, skilled labour and agents of commerce. Our assessment establishes the following risks Andhra Pradesh faces today which should ideally be the talking point for AP voters.

1) Agriculture-dependent economy: The undivided erstwhile Andhra Pradesh saw a concentration of capital, urbanisation and industry in the norther part of the state, whereas the expansive Rayalaseema region retained most of its farms and small-scale industries. The new AP state is heavily dependent on its agricultural sector, apart from the commercial port of Vishakhapatnam (Vizag). The state has to diversify its economy as soon as possible in order to keep generating employment and a stable tax revenue stream.

2) Education – Secondary and tertiary: Most of the higher education institutions were present in Telangana state, around the capital region of Hyderabad. AP state needs quality institutions of higher education for its relatively young, unskilled population. CM Chandra Babu Naidu has made education one of his priorities for the new state and has signed multiple MoUs with prominent educational institutions such as the Karnataka-based People’s Education Society (PES), and Tamil Nadu’s SRM Group of Institutes as well as Vellore Institute of Technology (VIT). All three major education groups are expected to set up urban and rural campuses for higher education in Andhra Pradesh.

3) Environmental regulations: AP hosts a sizeable chunk of the Eastern Ghats, an ecologically sensitive hill range home to many endangered species of flora and fauna. Fortunately, AP State has the opportunity to establish strict anti-pollution, anti-poaching legislation, some of which it has inherited from the erstwhile Andhra state.

4) Infrastructure: The lack of capital has resulted in less than adequate infrastructure for the state. As of January 2019, the proposed capital Amravati is still under construction, and the state is in dire need for more urban housing projects, basic roadwork, bridges, railway stations and even office spaces. AP State will have to undergo a massive construction phase wherein basic government services are installed in permanent offices; the legislative house is functional and the new government employees have sufficient living facilities.