US aid to UNRWA stopped.

Washington ends its contributions to Palestinian refugee agency, calling it “irredeemably flawed”. The US was the single largest contributor to the UNRWA, providing $368 million annually. The United Nations Relief and Works Agency for Palestine (UNRWA) was established after the 1948 Arab-Israel conflict..

The US was the single largest contributor to the UNRWA, providing $368 million annually.

The United Nations Relief and Works Agency for Palestine (UNRWA) was established after the 1948 Arab-Israel conflict to carry out relief operations and civil works programs for Palestinian refugees. The Agency’s services encompass education, health care, relief and social services, camp infrastructure and improvement, microfinance and emergency assistance, including in times of armed conflict.

The UNRWA is funded almost entirely by voluntary contributions from the UN Member States. UNRWA also receives some funding from the Regular Budget of the United Nations, which is used mostly for international staffing costs.

The Trump administration had pledged $60m to UNRWA in January but withheld another $65m pending a review. That remaining payment of $65m is now expected to be cancelled. 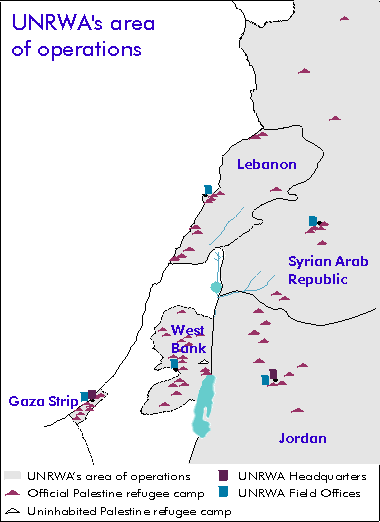 Read more about the US’s earlier suspension of aid to UNRWA here.

The United States is ending all funding for the UN's Palestinian refugee agency, the US State Department says. The US administration has "carefully reviewed" the issue and "will not make additional contributions to UNRWA," spokeswoman Heather Nauert said.

Ms Nauert told reporters at the time that the Trump administration had committed the $60m as a voluntary contribution for 2018 so that UNRWA did not run out of funds, and schools and health care facilities would not have to close.

She added that the US would "like to see some revisions made in how UNRWA operates", to ensure that the money was "best spent" so that people got the services they needed.

A spokesman for Palestinian President Mahmoud Abbas later said the move was an "assault" against his people. He added that the decision was "a defiance of UN resolutions". The latest move comes after the US announced back in January that it would withhold more than half of a tranche of funding for the agency.

US President Donald Trump has indicated a change in approach when he tweeted that the US received "no appreciation or respect" for the large sums of aid it provided to the region. Mr. Trump also threatened to cut aid to the Palestinians over what he called their unwillingness to negotiate with Israel.

Human rights agencies have urged the United States to reverse its position as this will end up hurting hundreds of thousands of Palestinians. Jan Egeland, secretary-general of the Norwegian Refugee Council said in a statement, “The move will have devastating consequences for vulnerable Palestinian refugees across the Middle East, including hundreds of thousands of refugee children in the West Bank and Gaza, Lebanon, Jordan and Syria who depend on the agency for their education.

She also added that the US’s decision will also deny people in Palestine a social safety net that helps them to survive. It will also undermine the UN agency's ability to respond in the event of another flare-up in the Israeli-Palestinian conflict.

Germany, UNRWA’s fifth largest contributor, announced that it would increase its contributions to the agency because its funding crisis was fuelling uncertainty in the region.

Some critics in Israel are arguing that defunding the UNRWA could cause regional instability and create more extremism. The UNRWA provides basic services such as water to Palestinians in refugee camps and cutting off aid will not bring them to the negotiation table.

There is a genuine risk of extremism increasing from this move. Youths who were fed, housed and educated will turn to violence and radical extremism if basic services are unavailable.

Our assessment is that the US President’s decision to stop aid to the Palestinians is heavily influenced from his key voter base of conservative Evangelicals who have been vocal opponents of any aid to Palestine. We feel that pressuring the Representatives of Palestine into resuming peace talks is not a good strategy as both parties in this conflict need to maintain mutual trust. We believe that the UNRWA’s budget will receive a boost from other contributing countries to cover the gap left by the US’s withdrawal.

We believe this is a perfect opportunity for India to add to its existing aid programs to Palestine. As India believes in the two-state solution, it enjoys good relations with both Israel and Palestine. Presently, India contributes USD 1 Million to UNRWA’s budget and the US’s share is too big for India to cover. However, New Delhi could extend critical humanitarian supplies and increase its goodwill in the region.