US withholds aid to Palestine

The US government has announced that it will be withholding nearly half of the funds it planned on giving to a U.N. Relief and Welfare Agency (UNRWA). The agency serves..

The US government has announced that it will be withholding nearly half of the funds it planned on giving to a U.N. Relief and Welfare Agency (UNRWA). The agency serves the needs of Palestinians.

The US State Department has noted that it would provide $60 million in aid but will withhold $65 million for now. The move comes only weeks after the international community condemned US President Donald Trump’s decision to recognize Jerusalem as Israel’s capital.

The ongoing conflict between Israel and Palestine can be traced back to mid 20th century. The origins to the conflict can be traced back to Jewish immigration. Much of the issues that two regions have fought over through the decades have been: mutual recognition, borders, security, water rights, control of Jerusalem, Israeli settlements, Palestinian freedom of movement, and Palestinian right of return.

Israel is the world's only Jewish state. In 1947, United Nations adopted a plan to partition Palestine into Arab and Jewish sections. In the immediate aftermath, the war between Arab nations and Israel took place. Jerusalem is a city located on a plateau in the Judaean Mountains between the Mediterranean and the Dead Sea. It is considered to be one of the holiest sites by millions of people across the world (it is considered holy by Christians, Muslims and Jews). Israelis and Palestinians both claim Jerusalem as their capital, as the State of Israel maintains its primary governmental institutions there while the State of Palestine ultimately foresees the city as its seat of power. So far, neither claim is widely recognized internationally. The Battle for Jerusalem occurred from December 1947 to 18 July 1948. As a result, the city was split between Israel and Jordan after the war, Israel ruling West Jerusalem and Jordan ruling East Jerusalem with the Old City.

On December 6th, 2017, US President Donald Trump pivoted from decades’ long US foreign policy and recognized Jerusalem as the capital of Israel. The international community has never recognized Israel's claim to the entire city. Trump’s announcement triggered a wave of protests and violence across Middle East. Muslim countries have also unified from the region to condemn the actions of the US President. In addition, despite veiled threats from the US, 128 members voted in favor of the resolution condemning and rejecting US President Donald Trump’s decision to recognize Jerusalem as the capital of Israel. 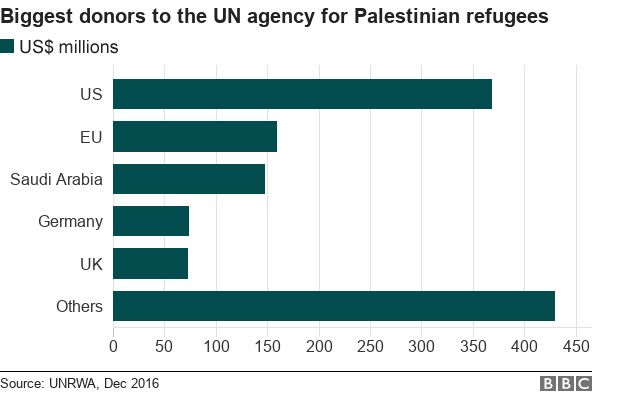 US President Donald Trump has repeatedly criticized not only the international response to his actions but also the value of sending aid to nations that vote against US interests in the UN. He also threatened to hold back aid to Palestine if the nation refused to cooperate with the ongoing efforts to broker peace in the region.

At the time, Nikki Haley, US ambassador to the UN, said that as the largest donor to the international body, the US had "a legitimate expectation" that its goodwill would be "recognized and respected". She had said, “When a nation is singled out for attack in this organization, that nation is disrespected. What's more, that nation is asked to pay for the privilege of being disrespected. In the case of the US, we are asked to pay more than anyone else for that dubious privilege. If our investment fails, we have an obligation to spend our resources in more productive ways.”

Only weeks after questioning the value of aid, it has been revealed that the US administration would be withholding nearly half of the initial aid it was planning on giving to a UN agency that helps Palestinians. According to the US State Department, the nation would provide $60 million in aid but will withhold $65 million for now.

Human rights agencies have urged United States to reverse its position as this will end up hurting hundreds of thousands of Palestinians. Jan Egeland, secretary-general of the Norwegian Refugee Council said in a statement, “The move will have devastating consequences for vulnerable Palestinian refugees across the Middle East, including hundreds of thousands of refugee children in the West Bank and Gaza, Lebanon, Jordan and Syria who depend on the agency for their education. It will also deny their parents a social safety net that helps them to survive, and undermine the UN agency's ability to respond in the event of another flare-up in the [Israeli-Palestinian] conflict.”

Palestinian President Mahmoud Abbas sharply attacked Trump's Middle East peace efforts, saying he would not accept any peace plan from the US after its recognition of Jerusalem as Israel’s capital. The talks between Israel and Palestine last broke down in 2014.

Meanwhile, Danny Danon, Israel’s ambassador to the United Nations said that the aid agency should be dissolved entirely noting, “UNRWA has proven time and again to be an agency that misuses the humanitarian aid of the international community and instead supports anti-Israel propaganda, perpetuates the plight of Palestinian refugees and encourages hate.”

Our assessment is that the US move will affect thousands of Palestinians who are dependent on it. We believe Palestinians refugees are some of the most vulnerable people in the Middle East. The health services provided by UNRWA provides a lifeline to vulnerable women, children, the sick & the elderly. We also sense that the relationship between the US & Palestinian authority will become more difficult and could undermine the possibility of peace talks in the near future.