The decline of the US stock market has sparked off a global sell-off. Stock markets around the world suffered steep falls and nearly $4 trillion have been lost within just..

The decline of the US stock market has sparked off a global sell-off. Stock markets around the world suffered steep falls and nearly $4 trillion have been lost within just days. The decline is remarkable as only just about a week ago, world stock markets were enjoying record high values.

The Dow is a stock market index. It, along with other stock market indexes, goes through periods of general increase or general decline. A period when there is an increase is referred to as the bull market and when there is decline, it is called a bear market. There are also phases of stagnation. The first period of bull market experienced by Dow was between 1885 and 1890. It reached its peak of 78.38 on June 4, 1890. Almost immediately, the index experienced a bear market and Dow plunged up to 63% in a period of six years. 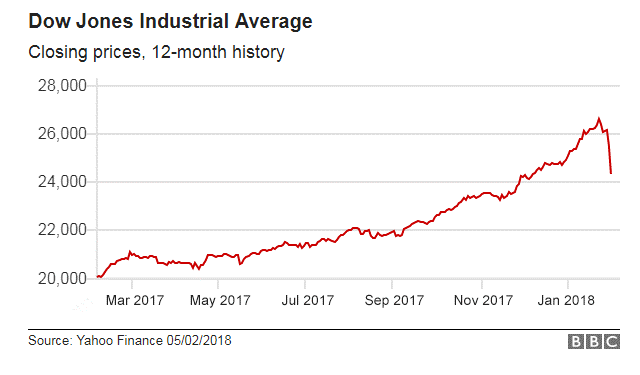 In 2018, the Dow Jones reached an all-time high of 26,000. However, soon afterward, the stock market began to decline. In February, it witnessed its steepest fall in six years. The decline was mainly due to large US tech companies like Google Exxon Mobil, Apple and Chevron reporting weak earnings. The Standard & Poor’s 500 index dropped 59 points, or 2.1 percent, to 2,762. Nasdaq fell too. At one point, the Dow Jones shed more than 800 points in 10 minutes. It dropped 1,175.21 points overall to close down at 24,345.75.

“The speed of this is like a flash crash at the end of the trading day,” said Jim Paulsen, strategist at Leuthold Investment Management. “Either there are quantitative trades that are automatic, or someone got caught awfully wrong.”

Stock markets around the world suffered steep falls and nearly $4 trillion have been lost within just days. Only eight days ago they had been enjoying record highs in terms of value. Europe and Asian markets were particularly hit by the sell-off.

Europeans were on track for their worst day since the aftermath of Britain’s vote in 2016 to leave the EU and started down as much as 3 percent. Frankfurt and Paris too suffered losses. In Asia, MSCI’s broadest index of Asia-Pacific shares outside Japan slid 3.4 percent. Japan's Nikkei 225 index was down 7%. However, it was able to recover to some point and closed 4.7% lower.

“Playtime is officially over, kids,” analysts at Rabobank said adding, “From a somewhat broader perspective, the dominance of passive over active investment, including the popularity of ETFs and other index tracking products — has set up an environment in which the size and speed of moves down could easily snowball. The market is positioned homogeneously, ie long the index, and is therefore selling homogeneously. . . Fasten your seat belts!”

The latest development in the bond market has also caused volatility in the market and resulted in increased concern among investors. Jane Sydenham, investment director at the stockbrokers Rathbones, said, "It is always a bit too early to tell, but I think these recent market falls are in the nature of a correction. What we have to remember is stock markets have had a very smooth ride upwards and we've not had a fall of more than 3% for 15 months. There's been a real lack of volatility, which is very unusual.”

The Indian stock markets have also sharply declined. In the span of 3 days, investors lost Rs 9.6 lakh crores. The Sensex, which is the BSE benchmark slumped 1,274.35 points.

Our assessment is that US stock markets flailing has unnerved equity markets globally. The sell-off in the US has led to a global sell-off. The Indian market is in tune with global markets in this downturn. We believe that financial markets have followed a 10-year cycle and the world has seen significant meltdowns in 1997 and 2007. The stock market could be heading towards a Bear market. We had earlier predicted this would be the case for 2018.