One study by the Ellen MacArthur Foundation and World Economic Forum has estimated that there may be more plastic waste than fish in the sea by 2050.

According to the UNEP, plastic is defined as “any synthetic or semi-synthetic polymer with thermo-plastic or thermo-set properties, which may be synthesized from hydrocarbon or biomass raw materials.” Besides polymers, plastic also often contain a number of harmful chemicals, used to alter physical properties such as colour and shape. Commercial use of plastic as we know it today began in the 1950s. Since then, the world has generated 8.3 billion tonnes plastic waste. As a result of the widespread use of plastic and consumerist culture, plastic has become a major source of pollution.

India alone generates approximately 5.6 million tonnes of plastic waste a year. According to National Geographic, 91% of plastic is not recycled. According to a study released in 2017, “the vast majority of plastic ever made is still present in the environment in some form.” Plastics can take between 500 to 1000 years to degrade, depending on complexity.

Dumping plastic in oceans is thought to adversely affect up to 700 different forms of marine life. A number of sea birds and fish consume or get entangled in plastic paraphernalia disposed in the ocean, which often results in death. The Great Pacific Garbage patch is a collection of floating trash in the Pacific Ocean. It stretched across an area widely described as “larger than Texas”, and weighs 79,000 tons. 94% of the 1.8 trillion pieces of plastic in the patch are microplastics. Plastic dumped in the ocean contains toxins such as Biaphenol A (BPA), which enter the food chain and have the potential to adversely affect human health. Other highly toxic pollutants such as pesticides tend to bind to plastic as well. As a result, there have been global calls to tackle this issue.

The infiltration of plastic does not end in the oceans. In 2017, studies revealed that plastic is prevalent in a number of land-based sources of water, including tap water. The study added, “There is evidence that particles may even cross the gut wall and be translocated to other body tissues, with unknown consequences”. Microplastics have been found in bottled water, fertilizers, cosmetic products, and seafood, and have an unknown impact on human health. Read more on microplastics here. 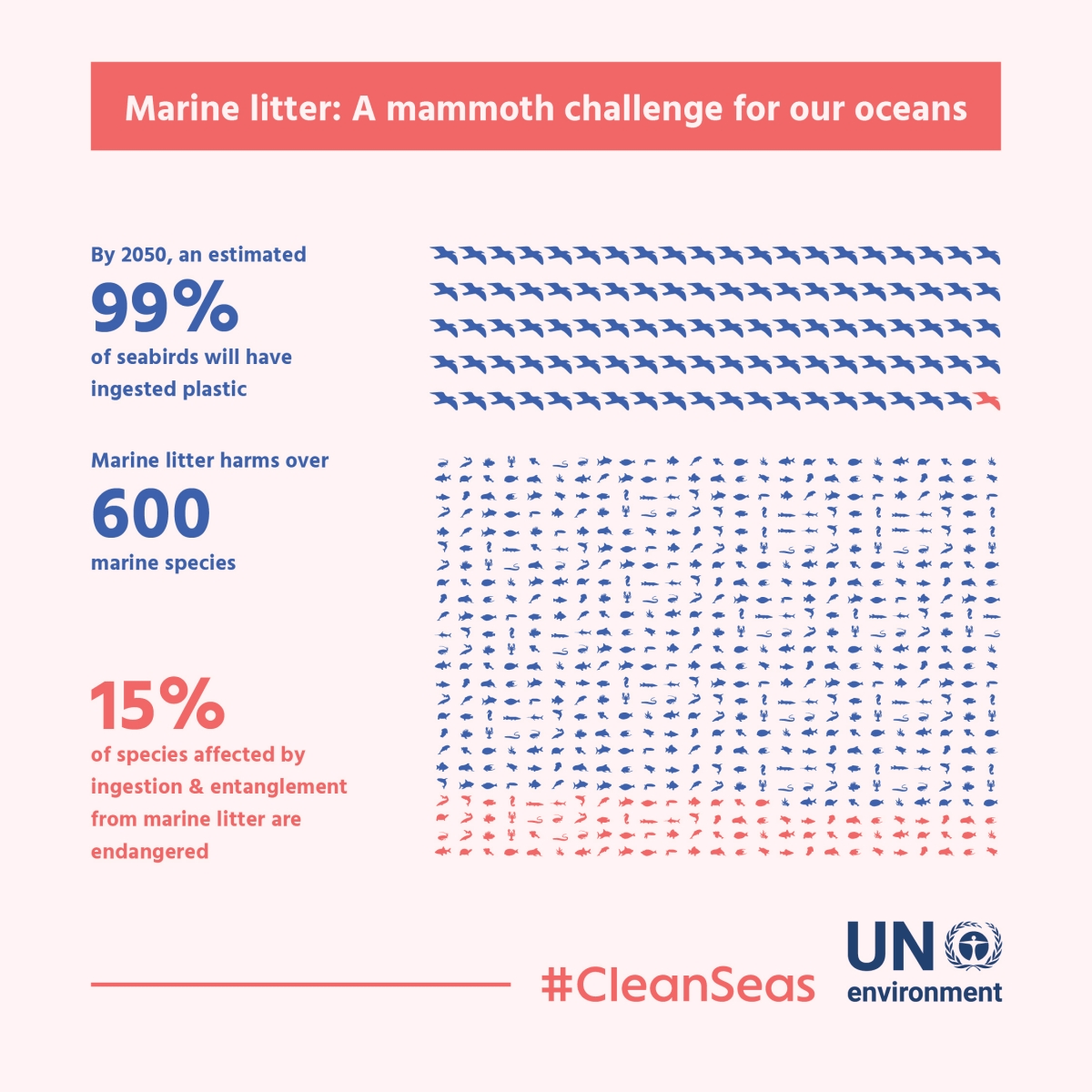 On 28th May, the European Commission (EC) proposed a number of rules that would reduce plastic pollution. The ban focusses primarily on single-use plastics and fishing gear. These items account for accounts for 70% of plastic waste in the ocean today. The ten items chosen are the top single-use plastic items found on European beaches. They account for approximately half of all marine litter on the beaches.

The disposable products banned include plastic cotton buds, cutlery, plates, straws, drink stirrers, and sticks for balloons. In addition to this, the proposed legislation also intends to reduce the consumption of plastic food containers and beverage cups. Producers that use primarily plastic packaging (including food containers, tobacco filters, wet wipes, and lightweight plastic bags) could be given incentives to use alternatives. Other items will have to include labels for safe disposal. There will be measures for fishing gear that contain plastic as well. EU member states will also be required to collect 90% of all plastic bottles used by 2025.

EC Vice-President Jyrki Katainen noted that single use plastics are not a smart economic choice. The new proposals “will help business and consumers to move towards sustainable alternatives”. He noted that this would allow Europe to extract greater economic value from resources and create products “that the world will demand for decades to come.” According to some estimates, moving towards alternative materials or items could create 30,000 jobs, prevent the emission of 3.4 million tonnes of carbon, and avoid environmental damages of approximately $25.6 billion by 2030. The proposed directive will now go to the European Parliament and the European Council for approval.

The EC has also proposed that taxing plastic waste and carbon emissions could be one way to contribute funds to the bloc’s budget after Brexit. The Commission estimated that governments contributing 80 cents per kilogram of non-recycled plastic packaging waste could contribute € 7 billion to the budget.

In March, the central Indian state of Maharashtra became the first Indian state to ban a range of plastics including plastic bags, disposable cutlery, cups and dishes, and plastic containers and packaging. There are some exceptions to the ban. In April, the UK announced that cotton buds, drinking straws, and other single-use plastic could be banned from 2019. Last year, Costa Rica also announced plans to ban disposable plastics by 2021.

Our assessment is that plastics have severe environmental and health implications. As stated previously, we believe plastic pollution is an issue that must be tackled in order to control the amount of toxins entering the food chain. The new EU directive may be a step in the right direction; however, effective implementation of the rules will be key. We believe that it will become increasingly necessary to find creative, more sustainable alternatives to materials such as plastics. As consumers, we can all cut down on plastic waste by reducing our consumption of use-and-throw material.