The effect of microplastics

Plastics, one of the most pervasive materials used today, have increasingly come under scrutiny for their potential health effects. Recently, a number of studies have..

Plastics, one of the most pervasive materials used today, have increasingly come under scrutiny for their potential health effects. Recently, a number of studies have found that microplastics, which are plastic particles smaller than 5 millimetres in diameter, are present everywhere from fertilizers and cosmetic products, to bottled water and seafood.

According to the UNEP, plastic is defined as “any synthetic or semi-synthetic polymer with thermo-plastic or thermo-set properties, which may be synthesized from hydrocarbon or biomass raw materials.” Besides polymers, plastic also often contain a number of harmful chemicals, used to alter physical properties such as colour and shape. Commercial use of plastic as we know it today began in the 1950s. Since then, the world has generated 8.3 billion tonnes plastic waste. As a result of the widespread use of plastic and consumerist culture, plastic has become a major source of pollution.

India alone generates approximately 5.6 million tonnes of plastic waste a year. 8 million tons of plastic trash is dumped into the ocean annually.  According to National Geographic, 91% of plastic is not recycled. According to a study released in 2017, “the vast majority of plastic ever made is still present in the environment in some form.” Plastics can take between 500 to 1000 years to degrade, depending on complexity.

Dumping plastic in oceans is thought to adversely affect up to 700 different forms of marine life. A number of sea birds and fish consume or get entangled in plastic paraphernalia disposed in the ocean, which often results in death. As a result, there have been global calls to tackle this issue. The Great Pacific Garbage patch is a collection of floating trash in the Pacific Ocean. It stretched across an area widely described as “larger than Texas”, and weighs 79,000 tons. 94% of the 1.8 trillion pieces of plastic in the patch are microplastics.

Microplastics are defined as plastic particles and fibres with a diameter less than 5 millimetres. Microplastics are generally formed through the fragmentation of larger plastic particles. A number of consumer products such as face scrubs, toothpaste and clothing contain plastic microbeads. Microplastics have been found in tap and bottled water across the globe, and some studies have suggested that they could be pervasive even on land, or in the air we breathe. Organic fertilizers and sewage sludge are thought to have small plastic fragments. Studies are currently being conducted as to whether this could impact groundwater sources. 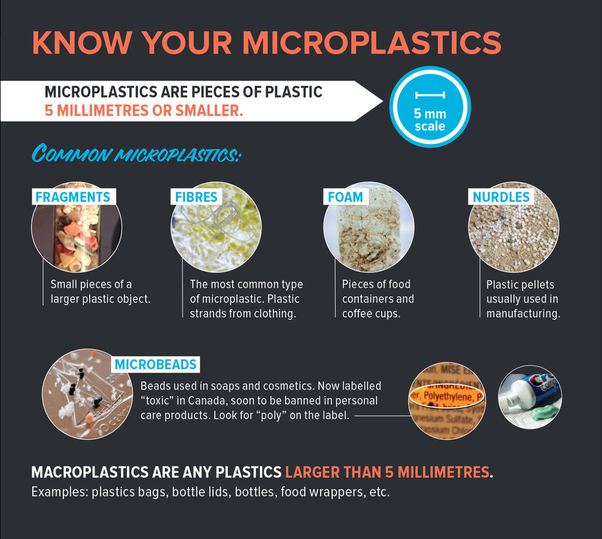 The direct health effects of microplastic particles on humans are still under investigation. There have been a number of studies in recent years exploring the potential health effects of microplastics. The World Health Organisation recently announced that it would launch a public health review on bottled water. The announcement came after the release of a world-wide study according to which bottled water contains plastic particles. A 2017 study by a Washington-based non-profit organisation noted, “There is evidence that particles may even cross the gut wall and be translocated to other body tissues, with unknown consequences”.

Plastic dumped in the ocean contains toxins such as Biaphenol A (BPA), and other chemicals added at the manufacturing stage. Plastics are also known to leech other environmental toxins around them, such as pollutants. Consequently, when these plastics enter the food chain, they accumulate and are transferred across trophic levels, and have the potential to adversely affect human health.  In April, a study in Hong Kong found plastic fragments in 60% of a popular fish species, the wild flathead grey mullet.  A 2016 study conducted in Indonesia and California found plastic in 25% of all fish sampled. Some consequences of microplastic ingestion found in fish include reduced reproductive ability, decreased feeding ability, abnormal behaviour and death.

Another study conducted at the University of Exeter found that 80% of teenagers in one study had traces of the synthetic BPA chemical, which has been proven to effect hormonal balance in humans. This chemical is thought to leech from plastic containers into food and water.  The United States Government has stated that styrene, widely used in plastic, may be a human carcinogen. Some scientists speculate that microplastics may act also as a vector for pathogens.

In India, studies have found that plastics are in highest concentration off the coast of Mumbai. Last year, it was found that Vembanad Lake in Kerala, which is used by locals for farming and fishing, had a high concentration of microplastics (up to 496 particles per square meter). The lake is also a recipient of contaminants from local industries. In March 2018, Maharashtra became the first Indian state to ban a range of plastics. The state government is reportedly considering extending this ban to microplastics in clothing and cosmetics.

According to ecotoxologist AD Veethaak, “Microplastics are associated with a complex mixture of chemicals that may transfer to humans and other organisms upon exposure.” However, “The level of human exposure, chronic toxic effect concentrations and underlying toxicological mechanisms by which microplastics elicit effects are still too poorly understood to make a full assessment of the risks to humans.”

In recent months, scientists have discovered some possible solutions to the world’s plastic problem. Researchers in the UK and US have engineered a plastic-eating enzyme that was found in plastic-eating bacteria. The bacteria were first discovered at a waste recycling centre in Japan in 2016. It digests polyethylene terephthalate, which is commonly used in plastic bottles. Plastic-eating caterpillars and fungi have also been discovered.

Our assessment is that directly or indirectly, plastic may have serious health implications on the whole of humanity. Cities such as Bangalore in India, which have waste disposal problems, would be particularly vulnerable to the potential impacts of microplastics. As stated previously, we believe plastic pollution is an issue that must be tackled in order to control the amount of toxins entering the food chain. Food and water safety legislation may eventually have to be modified, contingent on the findings of future studies. Meanwhile, creative solutions to the problem of plastic pollution must be explored.