The world will be in deep trouble if it fails to tackle climate change and inequality, IMF managing director Christine Lagarde has warned. “If we don’t address these..

The world will be in deep trouble if it fails to tackle climate change and inequality, IMF managing director Christine Lagarde has warned. “If we don’t address these issues... we will be moving to a dark future” in 50 years, she told in a major economic conference in the Saudi capital Riyadh on Tuesday.

Lagarde said that “we will be toasted, roasted and grilled” if the world fails to take “critical decisions” on climate change.

What is climate change?

The planet's climate has constantly been changing over geological time. The global average temperature today is about 15C, though geological evidence suggests it has been much higher and lower in the past.

However, the current period of warming is occurring more rapidly than many past events. Scientists are concerned that the natural fluctuation, or variability, is being overtaken by a rapid human-induced warming that has serious implications for the stability of the planet's climate.

What is the "greenhouse effect"?

The greenhouse effect refers to the way the Earth's atmosphere traps some of the energy from the Sun. Solar energy radiating back out to space from the Earth's surface is absorbed by atmospheric greenhouse gases and re-emitted in all directions.

The energy that radiates back down to the planet heats both the lower atmosphere and the surface. Without this effect, the Earth would be about 30C colder, making our planet hostile to life. 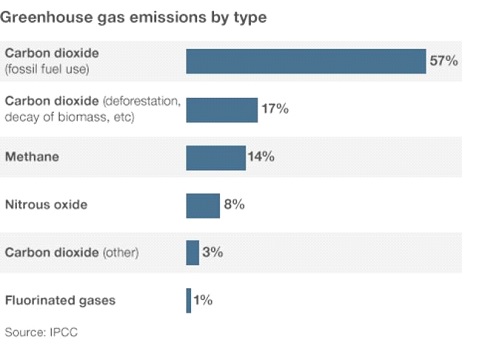 What is the evidence for warming?

Temperature records going back to the late 19th Century show that the average temperature of the Earth's surface has increased by about 0.8C (1.4F) in the last 100 years. About 0.6C (1.0F) of this warming occurred in the last three decades.

Satellite data shows an average increase in global sea levels of some 3mm per year in recent decades. A large proportion of the change in sea level is accounted for by the thermal expansion of seawater. As seawater warms up, the molecules become less densely packed, causing an increase in the volume of the ocean.

But the melting of mountain glaciers and the retreat of polar ice sheets are also important contributors. Most glaciers in temperate regions of the world and along the Antarctic Peninsula are in retreat. Since 1979, satellite records show a dramatic decline in Arctic sea-ice extent, at an annual rate of 4% per decade. In 2012, the ice extent reached a record minimum that was 50% lower than the 1979-2000 average.

In 2015, around 195 nations signed the Paris climate agreement which set out goals to reduce greenhouse gas emissions, so as to prevent temperatures rising by more than two degrees in around 50 years.

But US President Donald Trump announced in June the start of a three-year process to pull out of the pact, arguing that it would put the US at an economic disadvantage.

His move faced fierce criticism from world leaders and activists, with former UN secretary general Ban Ki-moon accusing Trump of “standing on the wrong side of history”.

Lagarde also called for tackling inequality between men and women and countries that are “haves” and those that are “have nots”. If the world wants a future that “looks like utopia and not dystopia”, it needs to address such concerns, Lagarde said. She predicted that in 50 years’ time, oil will be a secondary commodity.

In a statement following her visit, Lagarde praised Saudi reform efforts and moves to address the economic effects of persistently low oil prices. “Saudi Arabia is also undertaking reforms to reduce constraints to women entering the workforce,” Lagarde said in the statement, pointing to a recent decision to allow women to drive.

Female entrepreneurship could be boosted through fiscal incentives and other policies, she added.

As we predicted earlier in our assessment, the state of the global economy is on a cliffhanger and we must prepare for every outcome. Global warming will cause changes that will create further heating, such as the release of large quantities of the greenhouse gas methane as permafrost (permanently frozen soil found mainly in the Arctic) melts. We believe that the scale of potential impacts is uncertain. The changes could drive freshwater shortages, bring sweeping changes in food production conditions, and increase the number of deaths from floods, storms, heat waves and droughts.