George Papadopoulos has become the first person to plead guilty in Special Counsel Robert Mueller's investigation of Donald Trump's Presidential Campaign. He confessed to lying to the FBI about his contacts with Russia.

In March 2017, then FBI director, James Comey said that the agency was investigating possible links between Russian government and Trump campaign aides. He was dismissed from his position by US President Donald Trump shortly thereafter. The US Department of Justice (DoJ) has appointed former head of the FBI, Robert Mueller, to investigate this matter. Additional information was leaked that Trump himself was under investigation for “obstruction of justice” having fired Comey on May 2017.

In 2017, emails released by Donald Trump Jr show that he accepted a meeting with Natalia Veselnitskaya, a Russian attorney in hopes of receiving detrimental information about Hillary Clinton. In June 2016, Trump Jr met with Veselnitskaya and music promoter Rob Goldstone. The meeting was also attended by then campaign Chairman Paul Manafort and Senior Advisor to the White House, Jared Kushner. Click here for more details regarding this specific meeting.

Mueller has since impaneled a grand jury and has been conducting the investigation with a team of lawyers and has filed charges against three former aides of the Trump Presidential campaign.

George Papadopoulos is an American foreign policy adviser who served in Donald Trump's 2016 Presidential campaign. He reportedly is a specialist in Mediterranean oil and gas policy. He studied political science at the DePaul University in Chicago and has a master's degree from University College London. His master's dissertation examined the impact of regulation on government policies in the Middle East. Previously he worked for the Hudson Institute, a conservative think tank, where he specialized in the energy policies of Greece, Cyprus, Egypt, Israel and Lebanon. He also worked at Energy Stream, a London energy consultancy, for four months. He joined the Trump campaign in March 2016. Trump himself mentioned Papadopoulos during an interview with Washington Post where he spoke about him favorably. 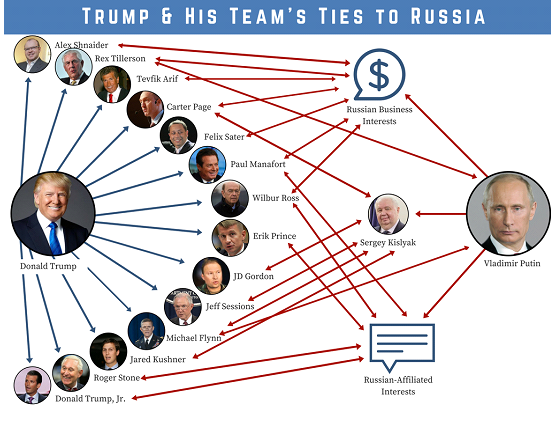 Former Chairmen of the Trump presidential campaign, Paul Manafort and his former business associate Rick Gates have surrendered to Federal authorities. They were indicted on 12 counts, including conspiracy against the United States, conspiracy to launder money, false statements. They have posted bonds presently for their release and have pleaded not guilty. For a detailed overview on their charges, click here.

George Papadopoulos has become the first person to plead guilty in Special Counsel Robert Mueller's investigation of Donald Trump's Presidential Campaign. He confessed to lying to the FBI about his contacts with Russia. Reportedly, soon after he began working in the Trump campaign, he began emailing his bosses that he has contacts with a woman he claimed was the niece of Russian leader Vladimir Putin. He interacted repeatedly with an international professor who promised compromising information from Russia about Clinton. He then lied about the timing and content of those interactions to the FBI. On October 5th, he pleaded guilty on one count. He has since been cooperating with the investigation. According to this statement in FBI’s guilty plea, “In truth and in fact, however, and as set forth above, defendant PAPADOPOULOS met the Professor for the first time on or about March 14, 2016, after defendant PAPADOPOULOS had already learned he would be a foreign policy advisor for the Campaign; the Professor showed interest in defendant PAPADOPOULOS only after learning of his role on the Campaign; and the Professor told defendant PAPADOPOULOS about the Russians possessing" dirt" on then-candidate Clinton in late April 2016, more than a month after defendant PAPADOPOULOS had joined the Campaign."

Thus, it was established that the reason this professor had sought Papadopoulos ought was because of his role in the Trump campaign. For his part, Papadopoulos was seeking detrimental information regarding Hillary Clinton from the Russians.

US President Donald Trump has not spoken publicly or Tweeted since the news of Papadopoulos emerged. He however did briefly make a statement about Manafort’s indictment Tweeting, “Sorry, but this is years ago, before Paul Manafort was part of the Trump campaign. But why aren’t Crooked Hillary & the Dems the focus????? ....Also, there is NO COLLUSION!”

The White House Chief of Staff John Kelly has given an interview stating that Trump is distracted by the investigation. He has also seemingly confirmed that Trump himself might be under investigation. He said, “All of the activities, as I understand it, that they were indicted for was long before they ever met Donald Trump or had any association with the campaign. But I think the reaction of the administration is, let the legal justice system work. Everyone’s innocent till – or presumed innocent – and we’ll see where it goes.” He added, “It is very distracting to the president, as it would be to any citizen, to be investigated for something, while at the same time trying to carry the weight of what being President of the United States means on his shoulder.”

The White House has also downplayed the role held by Papadopoulos during the campaign describing as low level volunteer. In an explosive interview, Carter Page, a Foreign Policy Adviser to Donald Trump's 2016 presidential campaign, said he might have exchanged emails about Russia with Papadopoulos; thus signaling that the investigation may not quite be over.

Our assessment is that George Papadopoulos’ guilty plea is far more problematic to the Trump campaign and the Trump Presidency than the indictments of Paul Manafort and Rick Gates. This establishes a clear link where members of the Trump campaign sought help from Russia to obtain detrimental information about Hillary Clinton. According to the plea agreement, Papadopoulos is actively cooperating with the investigators for a lesser sentence and hence it could lead to more indictments. As we have predicted earlier, it is possible that Donald Trump Jr and Jared Kushner may also be indicted in the future. This could be catastrophic for Donald Trump.