For decades, Manipur has been fighting active separatist movements which demand succession from the Union of India. In the extensive crossfire, the state has lost crucial revenue generation as well as the stability of a conflict-free state. Like most of the North-East, Manipur does not hold any sway in the post-poll coalition building, however, it can lead the nation in more ways than one if it invests its resources strategically. 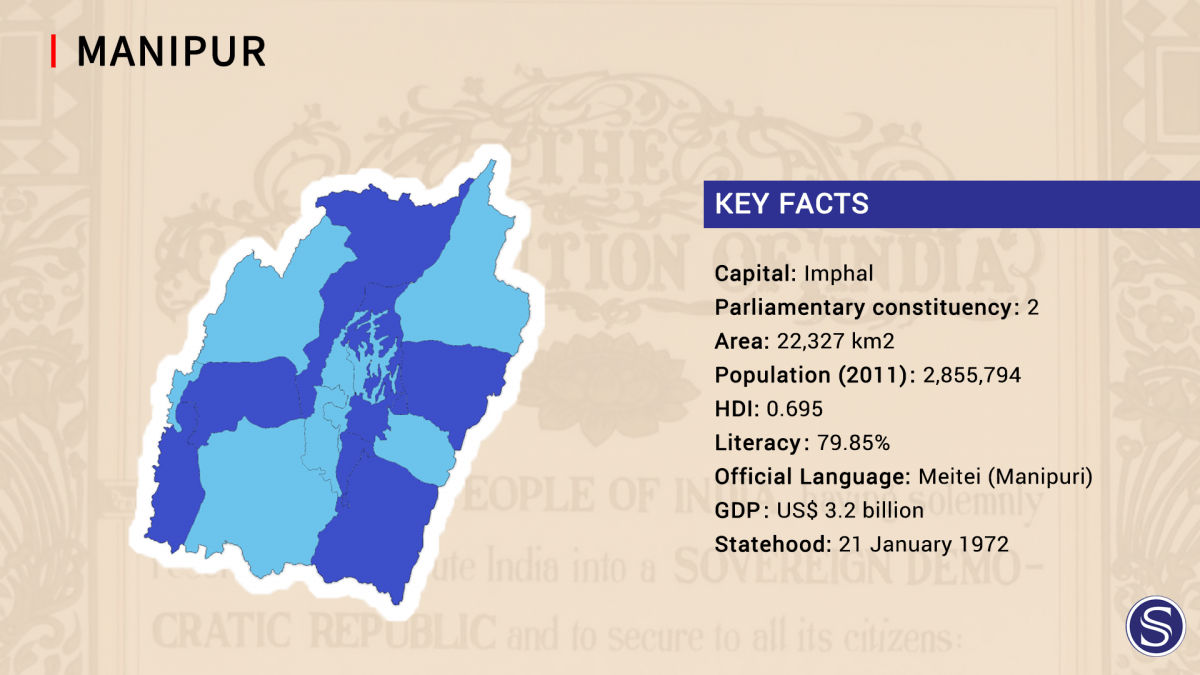 After the war, the princely states and India moved toward independence. The Manipur Constitution Act of 1947 established a democratic form of government, with the Maharaja as the executive head. Faced with Burma's ambitions to take over the state, in 1949, Maharaja Bodhchandra went to Shillong, where he signed the instrument of accession to merge the kingdom into India instead. Thereafter the legislative assembly was dissolved, and Manipur became part of the Republic of India in October 1949. It was made a Union Territory in 1956. and a fully-fledged State in 1972.

Manipur has had a long record of insurgency and inter-ethnic violence.[34][35] The first armed opposition group in Manipur, the United National Liberation Front (UNLF), was founded in 1964, which declared that it wanted to gain independence from India and from Manipur as a new country. Over time, many more groups formed in Manipur, each with different goals, and deriving support from diverse ethnic groups in Manipur.

Since 1980, the application of AFSPA has been at the heart of concerns about human rights violations in the region, such as arbitrary killings, torture, cruel, inhuman and degrading treatment, and forced disappearances. Its continued application has led to numerous protests, notably the longstanding hunger strike by Irom Sharmila Chanu.

1)     Armed Insurgency: Manipur has been plagued by armed insurgents since the early 1960s and it has largely been shunned by the mainstream media. The violence in Manipur extends beyond the conflict between Indian security forces and insurgent armed groups. There is violence between the Meiteis, Nagas, Kukis, and other tribal groups. The Meitei insurgent groups seek independence from India whereas the Kuki insurgent groups want a separate state to be carved out of Manipur. The parallel rise of Naga nationalism in neighbouring Nagaland led to the emergence of the National Socialist Council of Nagaland (NSCN) activities in the state. The controversial Armed Forces (Special Powers) Act (AFSPA) still remains in force in the state.

2)     Economy: the state relies on agriculture as its main source of revenue but tourism is the second highest contributing industries. Tourism is a far more adaptable and scalable industry and it requires fewer state resources. The tourist season is from October to February when it is often sunny without being hot and humid. The culture features martial arts, dance, theatre and sculpture. Greenery accompanies a moderate climate. The seasonal Shirui Lily plant at Ukhrul (district), Dzukou valley at Senapati, Sangai (Brow-antlered deer) and the floating islands at Loktak Lake are among the rarities of the area.

Our assessment is that Manipur is in a fragile state of uneasy peace and it suffers from real problems with limited resources. We believe that Manipur has little influence in electoral politics but it is of vital strategic importance for the government to safeguard its citizens in the state against external attacks from separatist groups. We also feel that the state’s vast hydrological resources are apt for a large network of next-generation hydropower plants.