Ladakh, for the most part, is a sparsely populated, semi-arid, high-altitude desert. It lies in the Himalayas, between the Zanskar and Karakoram mountain ranges. The mighty Indus River and its tributaries, including the Shyok flow through the valleys and into Pakistan.

What were the strategic reasons for a separate Union Territory?

Ladakh, for the most part, is a sparsely populated, semi-arid, high-altitude desert. It lies in the Himalayas, between the Zanskar and Karakoram mountain ranges. The mighty Indus River and its tributaries, including the Shyok flow through the valleys and into Pakistan. In 1834, the Dogra General Zorawar Singh conquered Ladakh, and it was assimilated into the Kingdom of Jammu & Kashmir (J&K).

Before India’s Independence in 1947, the main route to Srinagar was from Muzaffarabad, in Pakistan. At the end of the 1947-48 Indo-Pakistan War, J& K was partitioned, with Muzaffarabad lying in Pakistan Occupied Kashmir (POK) and Srinagar in India. Thus, independent India’s first two major road construction activities in J&K were along the alignments of the present national highways: Jammu – Srinagar (266 Km) and Srinagar – Kargil – Leh (419 Km). The road-construction activities were actually undertaken by military engineers, during the war itself. While the first road had to scale the Pir Panjal Range at Banihal Pass, the second had to scale the Zanskar Range at Zoji La Pass. 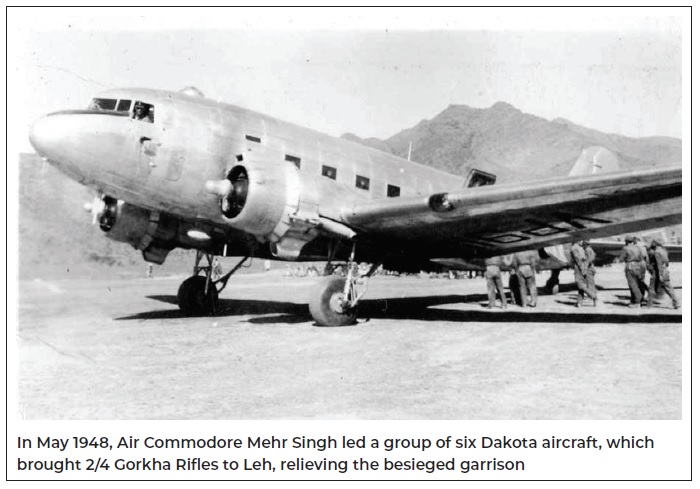 The 1948 construction of the road through Zoji La Pass (11,575 ft), is celebrated as an achievement in military engineering. The construction undertaken by the Madras Sappers enabled M-5 Stuart Light Tanks to operate on the Gumri Plains, the highest altitude that tanks have ever been operated, in the world. With that remarkable victory, the siege of the Leh Garrison was lifted, and Pakistani troops were pushed back towards Skardu. When the UN-mandated ceasefire was imposed on 01 Jan 1949, Ladakh was in Indian hands, with Gilgit and Baltistan, still under Pakistan occupation.

Even today, the Srinagar – Sonmarg – Dras – Kargil – Leh road, is main road axis to Leh. Every year, in Nov-Dec, Zoji La Pass gets closed, due to snow. It is only in April-May, the following year that the road is re-opened, by the Border Roads Organization. In 2018, the Government of India sanctioned the construction of a 14-Km tunnel at Zoji La, at an estimated cost of US$ 930 million. The two-way tunnel, when completed, is expected to reduce the arduous, seasonal, three-hour journey; to, an all-weather, all-year, 15-minute journey! 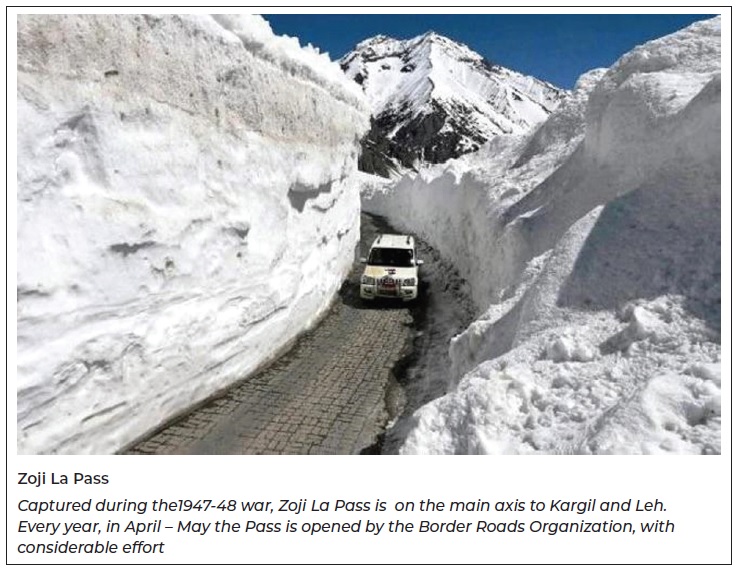 In 1957, the Chinese press announced the completion of the 11,000 Km road from Yarkant, in Xinjiang Province to Gartok, in Tibet. This was considered to be a major engineering achievement, as most of the road was constructed at altitudes higher than 4,000 meters, above MSL. The Chinese announcement made no mention that the alignment passed through Aksai Chin, which was Indian territory. When the snows melted in 1958, the Indian Army sent two foot-patrols, into Aksai Chin to confirm, if the alignment violated Indian territory. One of the patrols, led by Capt. GKK Iyengar, found the 3.6-meter metaled road, in Aksai Chin. The patrol was later captured by the PLA, imprisoned for more than 40 days; but later released, at Karakoram Pass. In an ordeal lasting several months, the Indian Patrol had traversed more than 1000 Km, on foot.

It was only as a consequence of Capt. Iyengar’s patrol that India realized that Aksai Chin, though claimed by India, was actually already occupied by the PLA. The Government adopted the Forward Policy, and the Indian Armed Forces began occupying the under-developed and claimed areas of Ladakh. As a consequence, the landing strip at Leh was improved to an airfield, and additional landing strips were created at Chushul, Thoise, DBO (Daulat Beg Oldie) and Fukche.

On 20 Oct 1962, war broke out between India and China. The PLA’s major effort was in Kameng District of Arunachal Pradesh, where they captured Tawang, Sela Pass and areas up to the plains of Assam. In Ladakh, the PLA forced the evacuation of DBO and pushed back the Indian Army to Chushul, on the banks of the Pangong Tso. On 21 Nov 1962, PLA announced the ceasefire and consolidated their positions, over-claimed areas.

Even today, India’s position remains the same; we claim Aksai Chin as a part of the erstwhile Kingdom of J&K. However, in reality, the 37,244 square kilometres of land called Aksai Chin, remains in control of the PLA.

Also called the Trans-Karakoram Tract, this territory was a part of Baltistan and formed a part of the Kingdom of J&K, in 1947. It lies between the Karakoram Range to the South and the Kunlun Ranges to the North. It extends 6993 square km and includes the Shaksgam valley and the Raskam (Yarkand) river. In 1963, after negotiations, Pakistan seceded this territory to China.

If this area, claimed by India had not been occupied by Pakistan, China and Pakistan would have had no common border; and, India would have a direct border with Afghanistan.  A portion of the seceded territory includes the Khunjerab Pass on the Karakoram Ranges. It is through this pass that the Karakoram Highway has been constructed that links Pakistan with China. It is also along this alignment that the China Pakistan Economic Corridor (CPEC), is being developed. 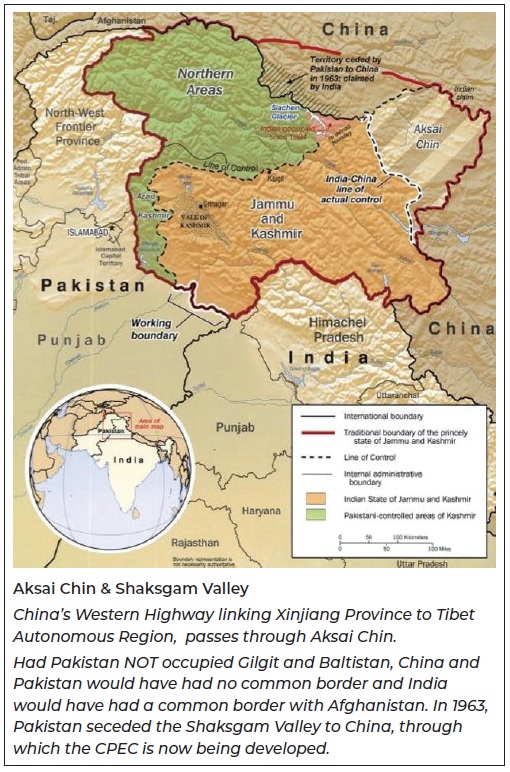 In the 1971 War, the main efforts of the Indian Armed Forces were in the East; defeating the East Pakistan Army led by Lt Gen AAK Niazi and creating Bangladesh. However, under the able leadership of Col Chewang Rinchin of the Ladakh Scouts, 800 square kilometers of territory along the Shyok River, was wrested from POK (Baltistan). The captured territories, also include the strategically important village of Turtuk.

Turtuk, is located at the southern extremity of the Siachen Glacier; and, is one of the logistic bases to support operations on the glacier. Turtuk, also gained prominence during the 1999 Kargil Conflict. 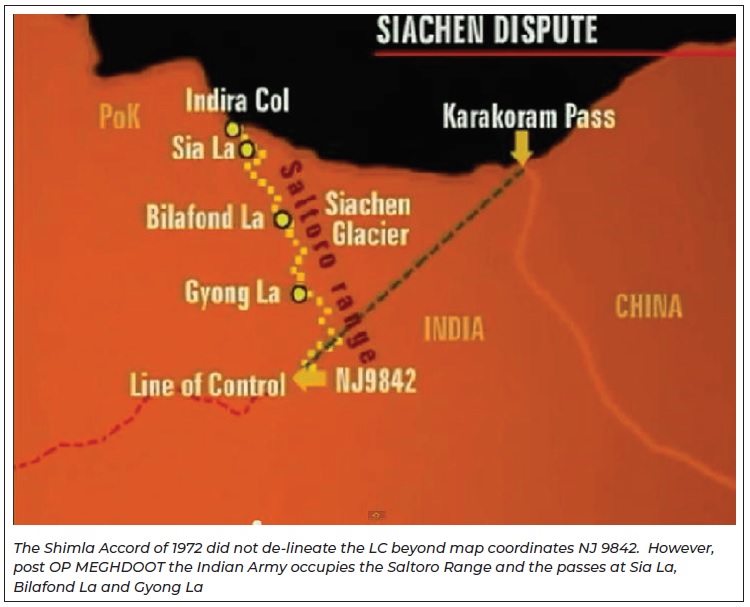 After the 1971 War, the Shimla Accord was signed between India and Pakistan. The ceasefire line in J&K was accorded the status of de-facto International Border (IB) and called the LC (Line of Control). Both India and Pakistan committed, to resolving differences bilaterally and that neither side would attempt to alter the LC, unilaterally. However, while the LC was de-lineated on the map, it was defined only till map coordinates NJ 9842. From the Indian point of view, the LC should follow northwards along the crest-line of the Saltoro and Karakoram mountain ranges, till the Karakoram Pass. However, the area was not occupied, either by India or by Pakistan.

Why was the LC not defined beyond this point? Perhaps, in 1972, there were no military engagements beyond NJ 9842, the area was inhospitable due to the Siachen Glacier and still largely unexplored. However, the peaks on the Saltoro Ridge (Saltoro Kangri, K12, Ghent Kangri, Sherpi Kangri) became mountaineering objectives, for international expeditions.  In the 1970s and 80s, Pakistan began granting permission, even providing logistic support and military liaison officers, to expeditions in this area.

In 1984, India executed OP MEGHDOOT, using the Ladakh Scouts and 4 KUMAON. In early April, Indian troops physically occupied the Saltoro Ridge; including all the three passes at Bilafond La, Sia La and Gyong La. Pakistan objected to India’s occupation of the Saltoro Ridge stating that it was a violation of the Shimla Accord. In their perception, the LC should follow NE directly to Karakoram Pass, without the norm of crest lines and watersheds. In 1987 and 1989 Pakistan launched attacks to evict Indian troops but the attempts were foiled and Indian positions have been further consolidated.

In May 1999 Pakistani forces occupied positions, on the Indian side of the LC and overlooking the Dras – Kargil road. The Indian Army and the Indian Air Force launched operations to evict the intrusion, which was accomplished by 26 July 1999. The Kargil conflict was the first armed conflict between nuclear-armed nations. Initially, Pakistan refused to accept the involvement of the Pakistan Army, but as the war progressed, Pakistan found itself internationally isolated. After the end of hostilities, PM Nawaz Sharif admitted that Pakistan had lost more than 4,000 soldiers and lost the conflict.

From the military-strategic perspective, the Kargil conflict demonstrated that in the case of India and Pakistan, there exists space for conventional operations, below the nuclear threshold.

Ladakh remains an under-developed region of the erstwhile state of J&K. It lies contiguous to the areas of Gilgit-Baltistan and Aksai Chin – areas which India claims; but, which are physically held by Pakistan and China, respectively. As a responsible nation, we need to develop road, rail and air communications into Ladakh; and, assimilate the people into the mainstream of India. We also need to strengthen the presence of the armed forces in the region and ensure no further loss of territory. If by making Ladakh a union territory, we can achieve those ends, the bold decision of the Central Government, will be a welcome development.