Dare to Disrupt, as a value for corporates

1.         When I was a child, my father invested in an Encyclopedia. Recently, I asked one of our younger employees, if they knew what an Encyclopedia was. The immediate response, I received was, “Sir, you mean Wikipedia!”. In 2006, I had a Reliance phone, with fixed subscriber circle, no internet, no mail and no messaging. Then, the revolution of smart phones began. Today, we have proliferation of automobiles, yet we wait in anticipation for the electric car with autonomous driving. We live in times of transformational change and the pace of that change is increasing. Professional armed forces across nations, have been in the forefront of these changes. Transformational change in the armed forces was recognized in the last decade of the 20thCentury, itself; and called ‘Revolution in Military Affairs (RMA)’.

2.         Recently, I was invited by Schneider Electric, to interact at their conclave, on the value, ‘dare to disrupt’. Many special forces draw inspiration from similar mottos. For e.g. the special forces of the United Kingdom, the SAS (Special Air Service) has the motto, ‘Who Dares Wins’. India’s elite counter-terrorist unit, 51 Special Action Group has the motto, ‘Sahas ki Vijay’; which translates approximately as, victory through courage. It is appropriate, in the age of transformational change, that Schneider Electric chose an almost military value to inspire employees.

3.         In the course of my interaction, I drew illustrations from Military History, which reinforced the value, ‘Dare to Disrupt’. This is the first of the six illustrations, I discussed.

Disruptions in the Conduct of Warfare

4.         Generations of Warfare.        In 1989, the US Government commissioned a study on warfare. Willian S Lind, one of the scholar-historians in the group, coined the term ‘generations of warfare’, to explain its revolutionary changes. The group suggested four generations of war. In 1stGeneration warfare, armies were pitted against one another and the General with the larger army was expected to win. Wars of ancient times, such as during the Egyptian, Mesopotamian, Greek and Roman civilizations fell in this category. Perhaps, our Mahabharata also falls in this category. 2ndGeneration warfare began with the introduction of the machine gun in the battlefield and the artillery field gun also came of age. These two weapons were very efficient killing machines and they changed the conduct of war. A good example of 2ndGeneration war is the 1stWorld War, which was fought between 1914 and 1918, mainly in Europe. 2ndGeneration warfare was fought mainly from trenches and if you exposed yourself, the chances were, you would get shot. Then came the advent of the tank, bringing mobility in the battle field and revolutionizing the character of war, yet again. This was called 3rdGeneration warfare and it is here that I draw my first illustration of daring to disrupt. 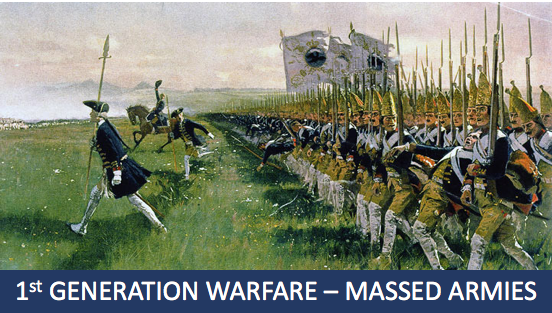 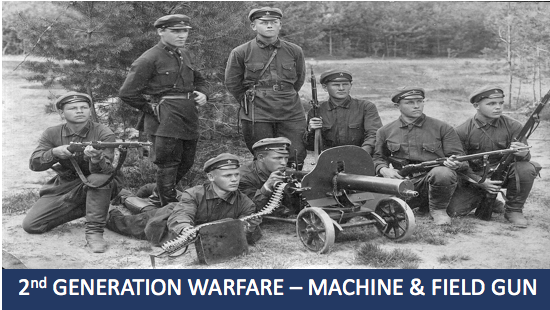 5.         Futility of Frontal Assault.     Captain DH Liddle Hart (1895 – 1970) was a British Infantry officer, belonging to the Light Yorkshire Regiment and he served during the 1stWorld War. During the Long War as it was called, he was injured on multiple occasions, even getting gassed during the Battle of Somme. After the war, he turned scholar, writing several papers and books. He is best known for the doctrine of the Indirect Approach. His central argument was, ‘the frontal attack was bound to fail and be expensive in casualties’. By frontal attack, he meant taking an objective along the direct and most obvious approach. In those days, men stood shoulder to shoulder and on orders marched towards the objective. The direct-approach invariably passed through minefields; and, mines are cruel weapons designed to maim soldiers, not kill them. The enemy would open up on the attacking troops with all weapons at his disposal; mortars, artillery, small arms and grenades. The attacking troops fell like pennies and when the attack failed, reserve companies were called in. This cycle would continue for days on end; until, either the attacker had no more troops or the defender could fight no more, because he had no ammunition. That is why Liddle Hart said the frontal assault was bound to fail and be expensive in terms of casualties. As an alternative, Liddle Hart suggested the ‘Indirect approach’. 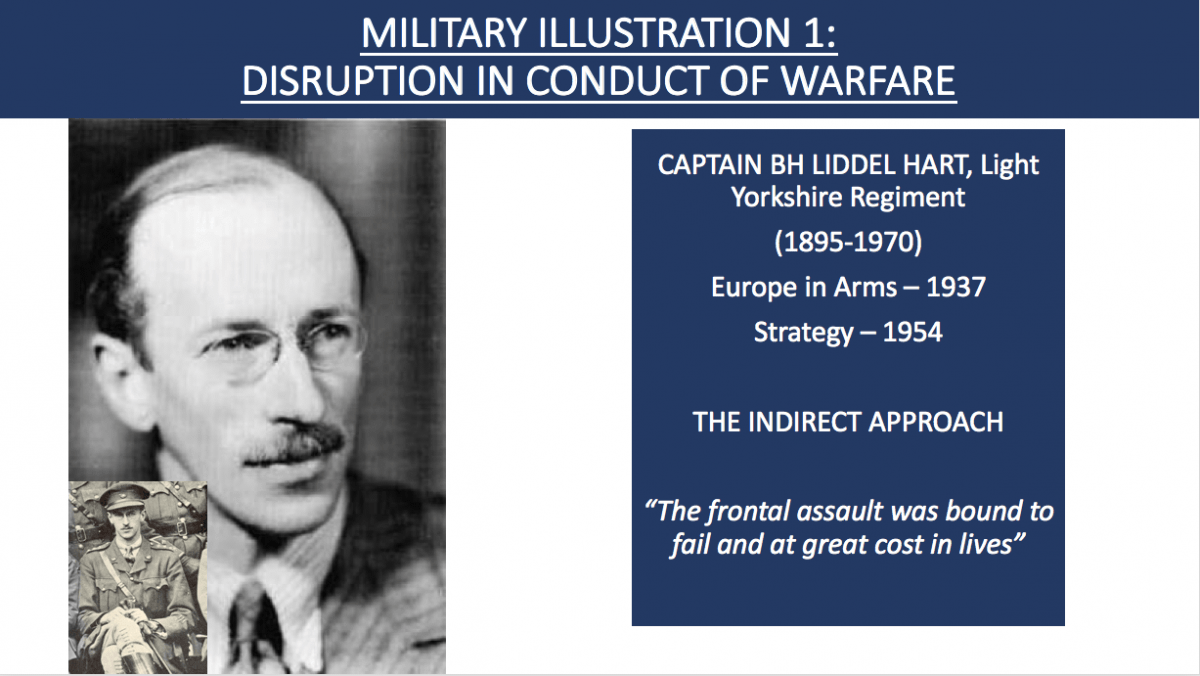 6.         Indirect Approach.     The Indirect approach, attacks would be led by tanks, who could overrun enemy positions. Infantry would be carried to the objective, in protected vehicles and Air Force bombers would degrade enemy defenses before being tackled by ground forces. Further, combat formations would be grouped together under a single commander with objectives, well to the rear of the enemy. How did the tactics of the ‘Indirect Approach’ affect troops on ground? Firstly, the prepared positions of the enemy would be ‘turned’, forcing them to face an unexpected threat from a new direction. Secondly, to confront the enemy in the rear, soldiers would have to leave their prepared positions and confront the enemy from unprepared positions. Thirdly, in the fog of war such changes are likely to affect the morale of troops; forcing them to believe they have only two alternatives – annihilation or surrender.

7.         British Perspective.    Such revolutionary thoughts about 3rdGeneration warfare, may not have gone down well with the conventional British Army and Liddle Hart’s Army career was over, in the relatively low rank of Captain. However, to the credit of the British system, some people did take note of Liddle Hart’s views; notably, Neville Chamberlain who at that time was the Chancellor and would later become PM of UK. However, on 01 Sep, 1939 Adolf Hitler invaded Poland; and UK and France declared war on Germany. A War Cabinet was formed, who immediately dismissed Liddle Hart’s modernization plans and a British Expeditionary Force was formed and dispatched to the Continent to defend Norway, Poland and France, in much the same manner as in the 1stWorld War.

8.         German Perspective During the same two decades (1918 to 1939) and between the world wars, Germany developed the tactics of ‘Blitzkrieg’ or Lightning War. Multi-arm combat formations, comprising tanks, infantry in armored carriers, motorized artillery, parachute infantry and dive bombers were grouped under independent commanders with different objectives. Operations were developed on narrow frontages and easily broke through the linear defenses of the Maginot Line. In six weeks from 10 May 1940 to 25 June 1940, Germany captured France, Belgium Luxemburg and the Netherlands. The British Expeditionary Force after being over-run, were forced to withdraw to the beaches of Dunkirk; from where they were extricated at great cost, losing a fifth of their force and all their heavy equipment. 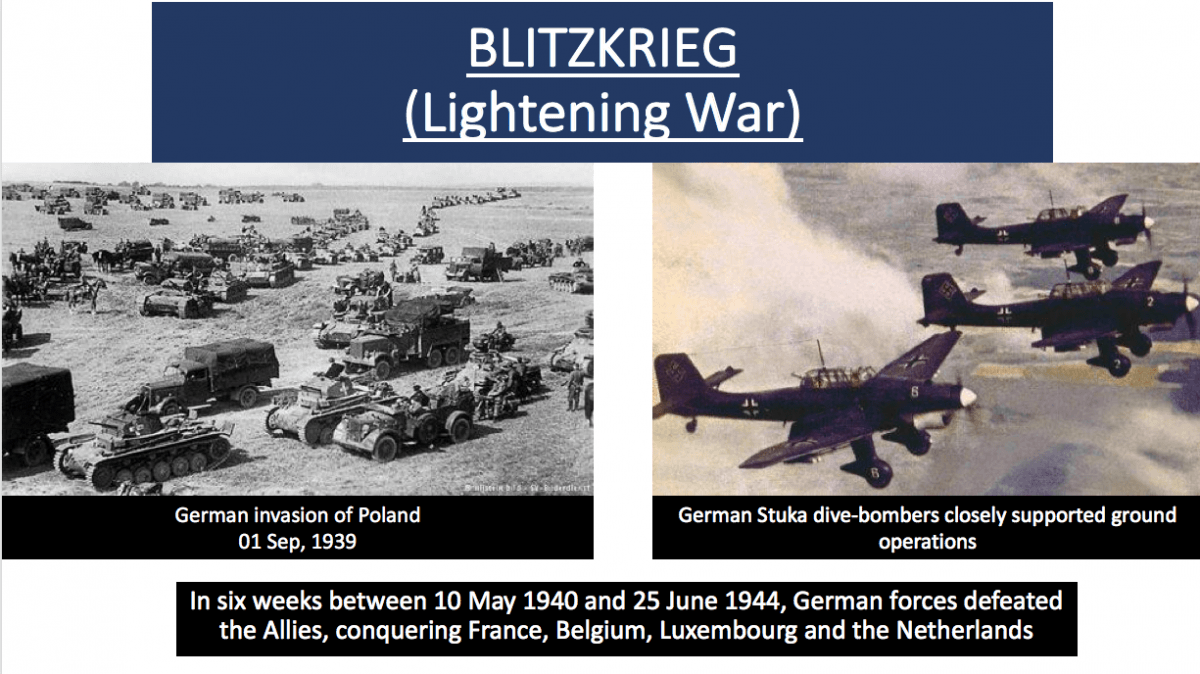 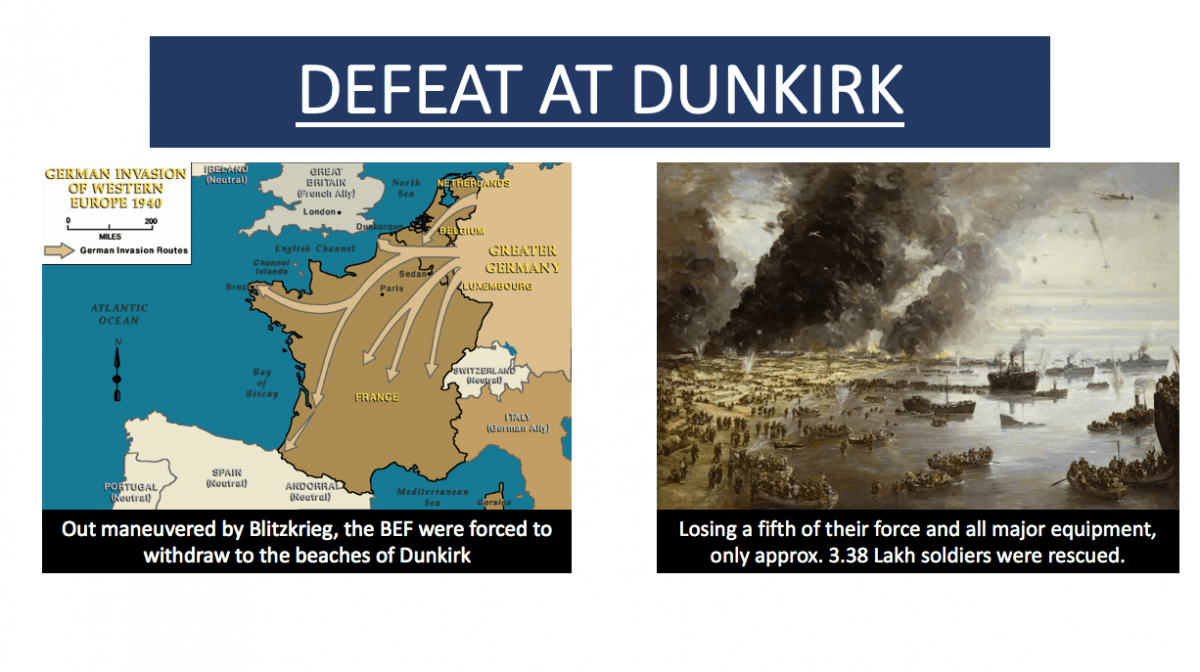 9.         Though Germany went on to lose the war, the tactics of Blitzkrieg and the decisive captured continental Europe, introduced the 3rdGeneration of War. After the war, many German Generals conceded that in developing the tactics of Blitzkrieg, they were influenced by the writings of Liddle Hart and the Doctrine of the Indirect Approach. Captain Liddle Hart, certainly dared to disrupt and his contribution towards the development of 3rdGeneration warfare, was recognised. As a lesson, it may be prudent to remember that when you dare to disrupt, you should be prepared for opposition, particularly from home turf. Also, when you dare to disrupt, your enemies may learn more from you than your own people.

10.       In 1967, Queen Elizabeth made Captain Liddle Hart a Knight Bachelor and President John F Kennedy famously called him, the Captain who teaches Generals.