Arunachal Pradesh: Development at the foothills of the Himalayas

Arunachal Pradesh is one of the 29 states of India and is the northeastern-most state of the country. Arunachal Pradesh borders the states of Assam and Nagaland to the south and shares international borders with Bhutan in the west, Myanmar in the east and is separated from China in the north... 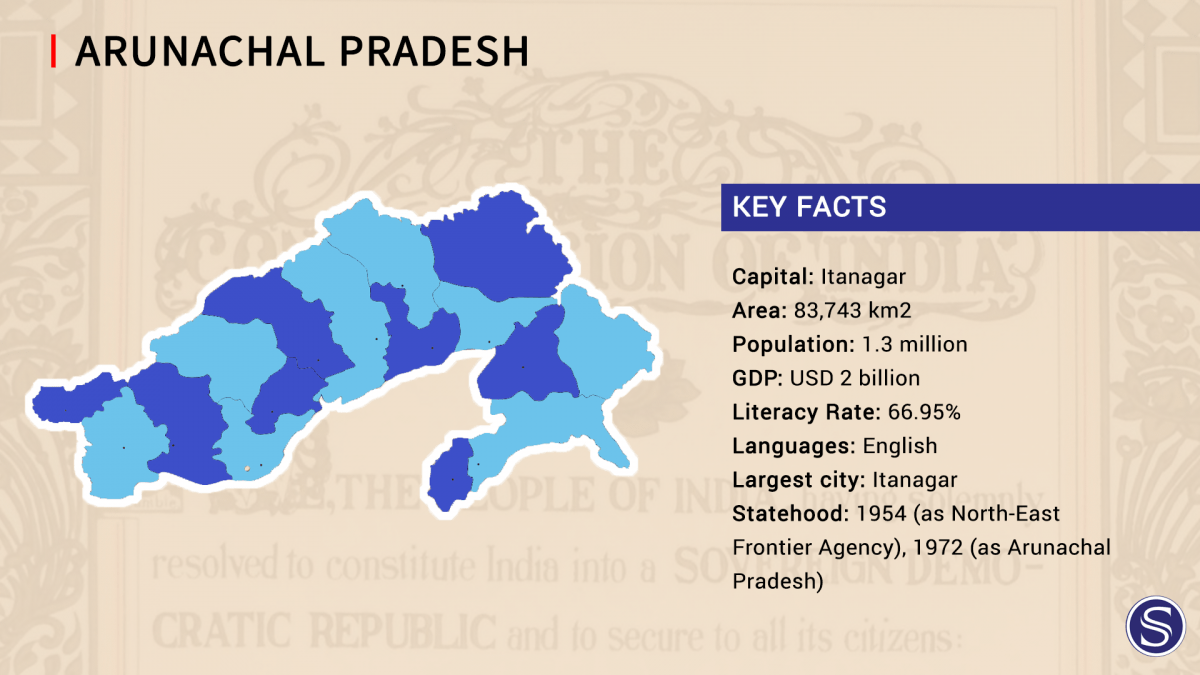 Arunachal Pradesh is one of the 29 states of India and is the northeastern-most state of the country. Arunachal Pradesh borders the states of Assam and Nagaland to the south and shares international borders with Bhutan in the west, Myanmar in the east and is separated from China in the north by the McMahon Line. Itanagar is the capital of the state.

On 1 December 1957, Tuensang was separated and attached to the newly formed Naga Hills district to form Naga Hills-Tuensang Area. On 1 August 1965, the administration of the agency was transferred from the Ministry of External Affairs to the Ministry of Home Affairs. Consequently, on 1 December 1965, the five frontier divisions (Kameng, Subansiri, Siang, Lohit, and Tirap) became its five districts. A deputy commissioner became the administrative head of these districts in place of a political officer. In 1967, an Agency Council was constituted for better administration. Until 1972, it was constitutionally a part of Assam state and was directly administered by the governor of Assam as an agent of the President of India. On 21 January 1972, the North-East Frontier Agency became the Union Territory of India and was placed under the charge of a Chief Commissioner.

A major part of the state is claimed by the Republic of China, and the People's Republic of China referring to it as "South Tibet". During the 1962 Sino-Indian war, Chinese forces temporarily crossed the McMahon line, the borderline between the state and China.

Arunachal Pradesh is strategically located and has been the subject of multiple incursions from Chinese military personnel since the late 1980s. China terms Arunachal Pradesh as part of its Tibet province while India has always maintained a steadfast claim of sovereignty and authority over the entirety of the state. Our assessment establishes the following risks Arunachal Pradesh faces today which should ideally be the talking point for voters.

1) Border issue: The most pressing issue the state faces is the repeated claims of China over the entirety of the state. The territorial integrity of AP has been the priority of all incoming Central Governments and the voters must also keep in mind recent encroachments by Chinese soldiers across the AP border.

2) Education: Like all states in the region, AP is in dire need for more education investment, expansion of existing educational facilities such as secondary schools and universities. Like the rest of the North East, AP is lacking in quality educational institutions which drive its youth population to neighbouring states of West Bengal and Bihar.

3) Infrastructure: The geography of the region hinders infrastructure development on the levels achieved in other states. As such, AP is in need of innovative designs, environmentally-friendly construction methods and durable structures to weather adverse climate. The border issue is somewhat addressed if AP has sufficient roads and bridges to access the remote border areas, which have been sites of illegal Chinese occupations.

Our assessment is that AP is in need of attention from the central government for the most basic services and facilities. We feel that the BJP-ruled state may vote for both of its Lok Sabha seats to candidates from the BJP, especially considering that the incumbent Minister of State for Home Affairs, Shri Kiren Rijiju, was elected from one of AP’s Lok Sabha constituencies.