Over 80 fact-checking organisations worldwide have signed an open letter to the YouTube CEO, claiming that the company is not doing enough to keep misinformation out of its platform. The letter accuses YouTube as one of the primary platforms involved in propagating misinformation and disinformation.

In 2017, PewDiePie - whose YouTube channel had the greatest number of subscribers (and who is still the most subscribed individual creator), came under heavy criticism for his anti-Semitic posts. Back then, The Wall Street Journal had reported that PewDiePie posted at least nine different videos with anti-Semitic jokes or Nazi imagery. While admitting that his jokes were offensive, the creator deflected criticism by accusing the Wall Street Journal of quoting them out of context.

This controversy created nothing short of a storm in YouTube. Firstly, it exposed the potentially harmful content that the platform allows. If the largest creator was able to post anti-Semitic jokes at the time, it meant that the chances of significantly more harmful content spreading on the platform were extremely high. Another point of concern was that the platform had allowed ads to run on the videos where PewDiePie made these offensive jokes. This led to a backlash from advertisers who did not want their brands to be associated with certain types of content. 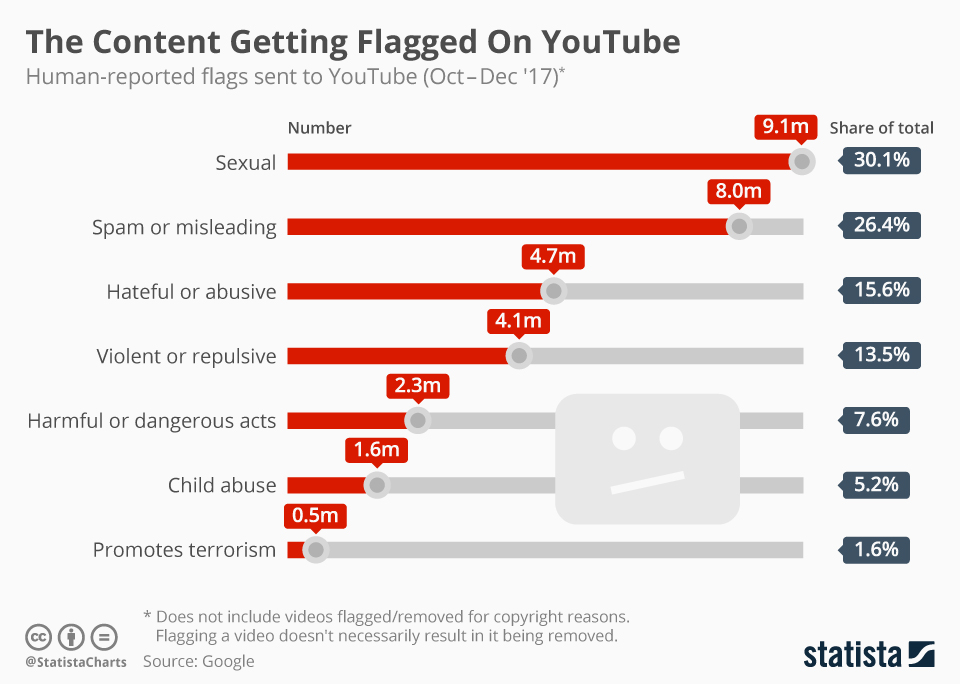 During and after the 2016 U.S. presidential election, 'misinformation and disinformation on social media platforms' was a divisive and crucial issue. While some viewed the debate as a way to clamp down on free speech, others saw it as a real threat to the functioning of a democracy.

According to reports, 62 per cent of American adults had gotten news from social media. Popular fake news stories were more widely shared on Facebook than actual and mainstream news. Users on social media platforms with no track record or journalistic experience could reach audiences to the same degree or even more than respected broadcasters like CNN.

Many people who read such fake news believed them, with most of them favouring Mr Donald Trump over Democratic nominee Hilary Clinton. The biggest issue with social media was that its algorithms had fed different news to different people, creating a situation where the public no longer shared the same fundamental sense of the world.

The most recent open letter written by fact-checking organisations claims those malicious actors are weaponising YouTube to manipulate and exploit the public. These same actors are also using YouTube to organise and fund-raise for themselves. The letter claims that the proliferation of this type of information is a global problem, and YouTube needs to take effective action against misinformation and disinformation. It needs to lay out a detailed roadmap of how it will improve the information ecosystem on its platform.

As per Tijana Cvjetićanin, the co-creator of fact-checking platforms Istinomjer and Raskrinkavanje, YouTube has allowed ideas that were once considered fringe to become mainstream. She also states that it is very easy for people who come to the website to simply consume news or entertainment and fall into rabbit holes of misinformation, which is then exacerbated by its algorithms. What makes it extra challenging to monitor YouTube is the fact that all of its content is in the form of video footage, and a lot of resources are required to peruse the same. The content becomes even harder to moderate when it is not in English or the videos are being posted from developing nations. This is due to a lack of investment and resources in the Global South.

Multiple Indian fact-checkers were cited in the letter. The managing director of BOOM (an Indian fact-checker) noted that since YouTube does not have a focused policy/programme for India in specific, it is difficult for them to identify channels that are spreading false information. He went on to say that videos spreading religious hate propaganda can thrive on the platform. Meanwhile, the founder of Factly stated that YouTube needs to give context to videos and not only take them down. According to him, there is a major issue with videos that promote fraudulent schemes, which look deceptively similar to government schemes. In a market like India, where many people are welfare-dependent, this can lead to bigger problems.

The COVID-19 pandemic has shown the extent to which misinformation and disinformation can translate to real-world harm. YouTube and other social media platforms have been exploited to spread fake news about the pandemic. With false information about how deadly the virus is, how masks are not effective and other anti-vaccine conspiracies, this kind of misinformation has prolonged the pandemic. The majority of people who are still dying from COVID-19 are unvaccinated. The issue in countries like the U.S. is not that the access to vaccines is low; instead, a significant proportion of the public refuses to take the vaccine. ‘Plandemic’ was a 2-part series that not only spread disinformation about vaccines, treatments and masks but also spread conspiracy theories that linked COVID-19 to Google, Big Pharma, the Centre for Disease Control and Prevention (CDC), Bill Gates etc. These videos garnered over a million views on YouTube, before they were finally taken down.

The letter also included some steps that YouTube could adopt to try and tackle the issue: a) YouTube needs to be transparent about the extent of disinformation and misinformation on its platform, b) It should work to debunk and provide context and not simply take videos down, c) Action needs to be taken against people who repeatedly post content that can be classified as disinformation or misinformation, d) The effort and resources invested in tackling the issue in languages beyond English need to be scaled up and d) Algorithms should be fine-tuned so as to not promote content classified as misinformation.

According to YouTube spokesperson Elena Hernandez, fact-checking is only one part of the puzzle of misinformation. She says that the company has worked and invested in policies and products worldwide to try and connect people with authoritative news. She went on to claim that YouTube has seen meaningful progress by keeping the consumption of recommended misinformation below 1 per cent of the total views. The company has also taken action when it comes to pandemic-related misinformation. If people search for ‘COVID-19’ on YouTube, authoritative sources are shown first.