For the first time in its history, the Dow Jones Industrial Average topped the 26,000 mark for the first time. The stock market rose over 1,000 points in the span of just 12 days..

For the first time in its history, the Dow Jones Industrial Average topped the 26,000 mark for the first time. The stock market rose over 1,000 points in the span of just 12 days.

However, there are already concerns that this rise could be followed by a crash.

In 2017, the stock market both in the US and globally performed robustly. Technology companies have also played a crucial role in sustaining the bull market as stocks for copnies like Apple, Amazon and Google have consistently risen in 2017. Apple stocks specifically rose by 1.4% to a record high amid good reviews for its new iPhone product (iPhone X). S&P also noted that more than half of the index's gains were driven by just five stocks — the tech giants Facebook, Amazon, Apple, Google and Microsoft.

Low inflation and rising global growth could also be attributed to the longevity of this bull market. By November 2017, the markets continued to climb due to better than expected performance of the US economy. The US economy expanded at an annual pace of 3% during the three months to the end of September. The growth rate was higher than what had been forecast by experts. 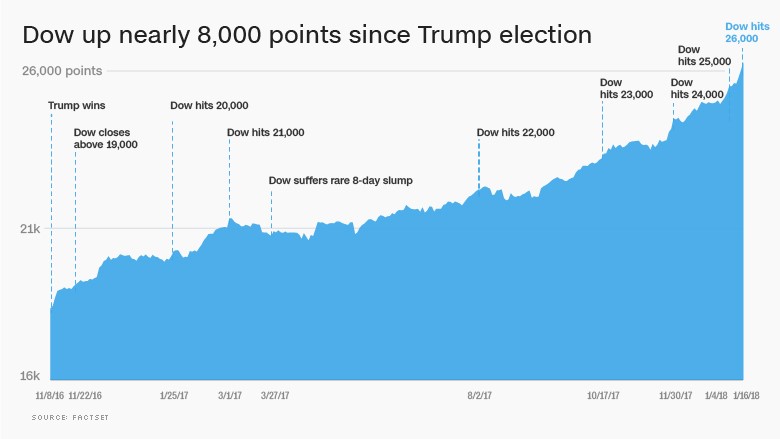 In December 2017, the Dow Jones index rose above 25,000 points, which at that point was a historic high for the stock market. The trend has continued in 2018 as well. Within the span of just 12 days, the US stock market has astronomically risen and topped at 26,000.

Due to tax cuts introduced by the Republican Party (and championed by US President Donald Trump), traders expect company revenues to increase. The global economy has also been on the rise, especially since 2017 with many regions growing faster than expected.

The US economy is currently going through one of its longest-ever periods of expansion, only surpassed by the booms that took place in the 1960s and the 1990s before the dotcom crash. The Dow has spiked more than 7,000 points, or about 40%, since President Trump's election.

However, there are concerns that the dramatic rise could be followed by a crash. "The healthiest thing would be some downward action for the next two or three sessions. Today you did have a somewhat bearish, outside reversal," said Scott Redler, partner with T3Live.com, who follows the market's short-term technicals.

Strategist Laszlo Birinyi said, “Right now, the market is at the upper end of the trading range. It's 5 percent over its 50-day moving average, and those are areas where the market tends to digest, consolidate, take a breather but not go down.”

Ed Yardeni, president of investment advisory Yardeni Research reportedly told his clients that the market is in a “melt up”. "I'm not a big fan of melt-ups," Yardeni wrote. "They tend to be followed by meltdowns."

Experts have noted that bull markets have traditionally ended on a high note and this could be one of the reasons to expect a stock market crash in the near future. Dan Suzuki, senior U.S. equities strategist at Bank of America Merrill Lynch has said, “It's an extremely impressive rally. It's pretty indicative of what you see at the end of bull markets when sentiment is in the driver's seat.”

Our assessment is that now is the time to remain prudent when it comes to investing. Historically, stock markets have tended to rise dramatically before crashing and currently, it seems to be the case with the Dow Jones. We believe that markets presently are volatile, and a course correction will likely take place. If there is a stock market crash, that would negatively impact global economy, which seems to be on the recovery since the 2008 crash.