Former CIA director Michael Hayden has noted that despite overtures from the international community the chances of North Korea actually denuclearizing are "near zero."

US President Donald Trump has forcefully called on North Korea to dismantle its nuclear program during his visit to South Korea.

To launch a nuclear attack on its neighbors, North Korea needs to be able to make a nuclear warhead small enough to fit on to a missile. While North Korea claims it has successfully "miniaturised" nuclear warheads, international experts have long cast doubt on these claims. According to information leaked in August 2017, US intelligence officials believe that North Korea is capable of miniaturisation.

In response to North Korea’s activities, the United Nations imposed two rounds of fresh sanctions. There is now a ban on textile exports and a call to reduce oil imports by 30%. There is also a ban on hiring North Korean workers overseas. There are currently 100,000 North Koreans employed outside of the country. North Korea’s economy would be particularly hit as its trade with China has also been affected. The combined value of North Korea’s 2016 export to China, of coal, iron-ore, lead-ore, and seafood, all of which are now banned, was almost $1.5 billion. This is about 60% of its total exports. 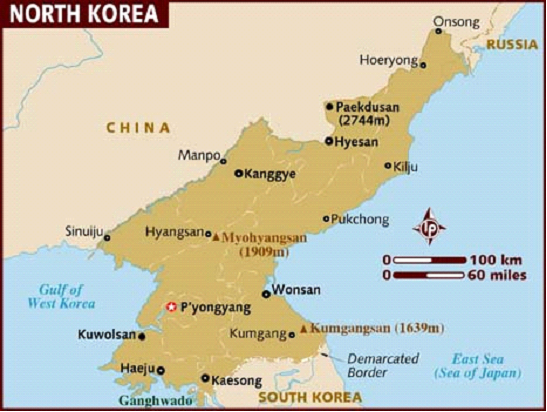 US President Donald Trump is currently on an official visit to Asia during which he will visit Japan, South Korea, China, Vietnam and the Philippines. While in South Korea, Trump said that he would encourage North Korea to “come to the table.” He also said

"The weapons you are acquiring are not making you safer, they are putting your regime in grave danger," Trump said during an address at South Korea's National Assembly in Seoul. "Every step you take down this dark path increases the peril you face. North Korea is not the paradise your grandfather. It is a hell that no person deserves."

"That would be a fatal miscalculation," he said of North Korean threats to strike the US and its allies. "This a very different administration than the United States has had in the past. Do not underestimate us. And do not try us." The President said that the nation would have to give up its nuclear weapons before talks begin.

Experts believe that such a pre-condition would make dialogue impossible. Former CIA director Michael Hayden has noted that despite overtures from the international community the chances of North Korea actually denuclearizing are "near zero." He said, “I think the broad intelligence judgement was we might be able to cap, we might be able to slow, we might be able to put this under more control and have greater transparency and so on. But the prospect of the North Koreans actually denuclearizing is probably near zero. They are not irrational in this regard. They have seen what happens to states that have given up nuclear programs and they’re trying to hold onto this as a matter of regime survival.”

He also added that the only alternative to a dialogue would be armed conflict. Mira Rapp-Hooper, a scholar at Yale Law School has also noted that denuclearization will not be accepted by North Korea. “There is very little chance that we are ever going to talk this guy (Kim Jong Un) out of his [nuclear] weapons, and none of us who have been watching the situation closely for years really thought we were going to.”

Our assessment is that adding pre-conditions will stall a diplomatic resolution to the crisis in the Korean peninsula. The main fear that North Korea has regarding denuclearization is that with the deterrent of a nuclear threat, the US may push for a regime change. The fate of Gaddafi and Libya looms dark over Kim Jong Un and hence the nation will continue defying the demands made by the US.