Who takes credit for ISIS defeat?

Lt. Gen. Abdul-Wahab al-Saadi, a three-star General in Iraq has stated in a recent interview that it was the nation’s soldiers and not US President Donald Trump who..

Lt. Gen. Abdul-Wahab al-Saadi, a three-star General in Iraq has stated in a recent interview that it was the nation’s soldiers and not US President Donald Trump who ultimately defeated the Islamic State.

The Islamic State of Iraq and the Levant also known as ISIL and ISIS that is considered a Salafi jihadist militant group and unrecognized proto-state that follows a fundamentalist, Wahhabi doctrine of Sunni Islam. It gained global prominence in early 2014 when it drove Iraqi government forces out of key cities in its Western Iraq offensive, followed by its capture of Mosul and the Sinjar massacre

In October 2016, the Iraqi army launched one of its most aggressive offensive against ISIS by besieging areas controlled by ISIS in regions surrounding Mosul. This offensive was called Operation We Are Coming, Nineveh. By the 1 November the forces entered the city of Mosul and began one of the biggest offenses against the militant group. By February 2017, the Iraqi army had recaptured western Mosul. Iran is an opponent of Islamic State of Iraq and the Levant (ISIL), fighting the group in Syria and Iraq. Iran's Quds Force is a "key player" in military intervention against the ISIL. ISIS no longer fully controls a major town or city after years of U.S.-led coalition and Russian airstrikes. 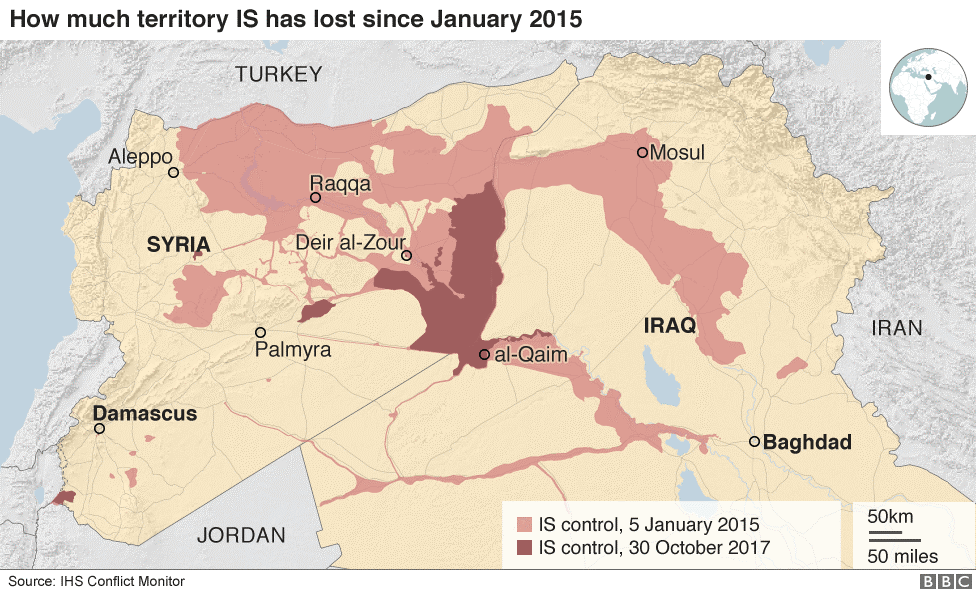 Lt. Gen. Abdul-Wahab al-Saadi, a three-star General in Iraq and one of the key players that orchestrated the successful defeat of ISIS, has made the defiant claim that it was the country’s soldiers and not US President Trump that ultimately took down the Islamic State.

In 2017, ISIS has continued to lose territory and has haemorrhaged a lot of its funds. There were also rumors that Abu Bakr al-Baghdadi had been killed in a raid – the group later refuted it with a video featuring the ISIS leader.

On December 2017, the Iraqi army released a statement noting that the nation had completely rooted out the Islamic State. "Our heroic armed forces have now secured the entire length of the Iraq-Syria border," Prime Minister Haider Al-Abadi said on his Twitter account. "We defeated Daesh (ISIS) through our unity and sacrifice for the nation. Long live Iraq and its people."

Al-Abadi in a later televised statement noted, “Dear Iraqis, your land has been completely liberated, and your towns and villages have been returned to the homeland. The dream of liberation became a reality. ISIS dream has come to an end. We must remove all its effects and should not allow terrorism to return again."

Saadi for his part has clarified that there are some sleeper cells with ISIS operatives still present in the nation. However, he has also expressed confusion over US President’s earlier remarks. A few months ago, Trump had said that ISIS hadn't been defeated earlier because "you didn't have Trump as your President." For that Saadi has said, “There was no difference between the support given by Obama and Trump." He added that America’s assistance in terms of training and logistics accounted for 50% of the victory against the terror outfit.

Speaking about the soldiers in the army he noted, “I don't deserve this rank if I don't free my fellow citizens from the grasp of ISIS. I have to be in the front line. Number one it is for the morale of my soldiers, and second I want to make sure no one mistreats civilians.” While discussing the final push at Mosul he admitted, “We were very careful to preserve the infrastructure and also the lives of innocents remaining in the city.”

Ben Connable, a political scientist at the RAND think tank has also noted that ISIS has never been weaker than it is right now. He said, “I have never been more optimistic about Iraq than I am today. They finally feel like they own their security.”

Our assessment is that victory of any conflict, especially an asymmetrical conflict such as the one between ISIS and Western supported armed forces, depends on training, logistics and manpower on the ground. However, sleeper cells within the region still pose a significant threat to not only the region but also Western countries that ISIS has previously targeted through terror attacks.