War of the Tariffs

Big US business are desperate for tax breaks and relief from tariffs as a protracted trade war loom. The United States and China are two of the largest economies in the world. Both countries consider the other as a partner in trade and an adversary in geopolitics. Diplomatic relations between US and China was first established..

Big US businesses are desperate for tax breaks and relief from tariffs as a protracted trade war loom.

The United States and China are two of the largest economies in the world. Both countries consider the other as a partner in trade and an adversary in geopolitics. Diplomatic relations between the US and China was first established in 1844 with the Treaty of Wanghia. This agreement allowed the US to trade in Chinese ports. After the Qing Dynasty was overthrown, in 1911, the US recognized the legitimacy of the Republic of China (ROC) government.

The U.S.–China Strategic and Economic Dialogue were created in 2009. Every year, high-level representatives from both nations open up dialogue to improve economic partnership. In 2017, the meetings that occurred were reported as being “tense”. Upon conclusion, the two countries cancelled a joint press conference and did not release a statement. They also did not release a plan of action.

US President Donald Trump has previously been a critic of China. He blamed the country for loss of jobs within the US and has often criticized the US trade deficit with China. China's trade surplus with the United States widened in 2017 while total foreign trade volume maintained rapid growth. 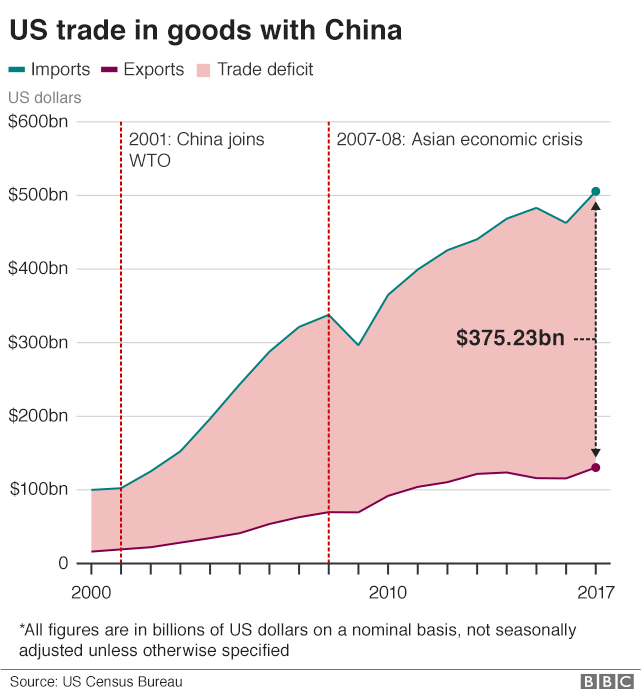 Read more on our extensive analysis on the US tariffs on Chinese imports and China’s retaliatory tariffs here .

Trump says the tariffs are a response to unfair Chinese trade practices, including forcing American companies to surrender their trade secrets to obtain access to the Chinese market and cyber theft of U.S. technology.

Members of both parties and many industry groups agree that China is guilty of such violations. As the economic impact of the confrontation with China mounts, opponents are becoming more vocal in their opposition to the president’s chosen tariff remedy.

At the USTR hearings, sporting goods manufacturers, candle makers, footwear companies, semiconductor producers and others will plead to be excluded from the next tariffs. More than 1,300 comments already have been filed in response to the president’s proposed action, most opposing the plan.

The planned escalation “dramatically expands the harm to American consumers, workers, businesses, and the economy,” the U.S. Chamber of Commerce said in its prepared testimony. On Wednesday, the U.S. and Chinese officials are scheduled to meet for the first time in two months to discuss potential solutions to the commercial standoff.

The U.S. delegation is led by David Malpass, undersecretary of the treasury for international affairs, while China’s team is headed by Wang Shouwen, vice minister of commerce. While some Chinese officials have expressed concern about their slowing economy and many Republicans in Congress are worried that the trade war could cost them votes in November, neither country seems prepared to back down.

So far, the United States has imposed tariffs on $34 billion in Chinese products; levies on a further $16 billion in products are scheduled to take effect on Thursday. China has retaliated against an equivalent amount of U.S. goods. The administration also remains split between hard-liners such as Peter Navarro, a top White House adviser who wants to force U.S. companies to end their dependence upon Chinese factories, and officials such as Treasury Secretary Steven Mnuchin who favour traditional trade policies.

Conclusive evidence from history strongly suggests there is no viable end to a trade war; retaliatory tariffs do not end at any point without the breaking down of basic trade apparatus.

The entire trade war hinges on President Trump’s behaviour leading up to the Mid-term elections in November. If the Democrats manage to win the House of Representatives in November, it is highly likely that the Democrat-controlled Congress will diffuse tensions by refusing to authorise a full-scale trade war.

It is highly plausible that the Republicans in the House will defy President Trump in an attempt to salvage their remaining political capital with the big businesses and industry.

Conversely, China cannot afford to be engaged in an impasse with its single largest consumer of goods and services. Despite enjoying a trade surplus of more than USD 400 billion with the US, China’s industries are heavily dependent on US demand for cheap, high quality semi-finished products. China needs the US as much as the US needs China. The meeting on Wednesday between US and Chinese trade representatives should be considered as a theoretical foundation for a gradual, staggered process of de-escalation.

Our assessment is that the trade war will result in what Mao Zedong described as a “protracted war”. The US and China are aware of the negative impact of increasing tariffs on each other, and we feel that a temporary truce will be achieved soon. The Bilateral trade between the US and China is valued at over USD 630 billion, which is worth more than the individual GDP of over 170 countries. We also believe a rapprochement may be on the cards only if the US and China commit to attending a series of directed negotiation talks, instead of imposing more retaliatory tariffs.