The President of the Generalitat of Catalonia, Carles Puigdemont, has revealed that he will declare Catalonia’s independence in a few days.

Deep fractures have appeared between the governments and the citizens in Spain as a result of the referendum.

Catalonia has not always been a part of Spain. The two regions merged in the 15th century when King Ferdinand of Aragon and Queen Isabella of Castile got married. Between the 15th and 19th centuries, the two regions become tightly integrated. However, a sense of nationalism arose in the 19th century. The political movement for a separate state of Catalonia can be traced back to 1922. Francesc Macià, the 122nd President of Catalonia founded the independentist party Estat Català. In 1931, after winning the elections, Macia declared the independent state of Catalonia. After negotiations with Spain, he accepted autonomy rather than independence. However, during the Spanish Civil War, General Francisco Franco abolished that autonomy. It is currently designated as a nationality by its Statute of Autonomy.

Even though it is a part of Spain, the region has a distinct culture and history dating back to the Middle Ages. Many native Catalans think of themselves as separate from Spain.

On October 1st, 2017, a referendum for independence was held in Catalonia. According to Catalan officials, more than 2.2 million people are said to have voted. There are 5.3 million registered voters in the region. Multiple polling stations were forcibly closed and urns were confiscated. At least 861 people were reportedly injured in the resultant violence.

Just under 90% of the votes were in favor of independence. 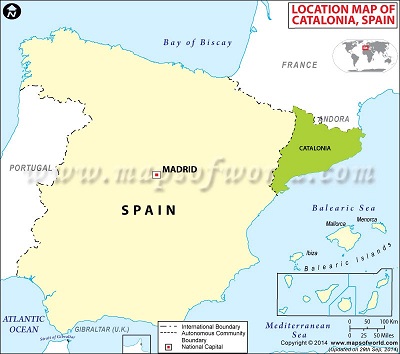 The President of the Generalitat of Catalonia, Carles Puigdemont, has revealed that he will declare Catalonia’s independence in a few days.

The Spanish government has announced that it will do everything in its power to ensure the secession does not take place. King Felipe of Spain accused Catalan officials of fracturing the unity of Spain. He said, “These authorities have scorned the attachments and feelings of solidarity that have united and will unite all Spaniards. Their irresponsible conduct could even jeopardize the economic and social stability of Catalonia and all of Spain.”

The violent tactics adopted by the Spanish police has been widely condemned. The popular football club, FC Barcelona criticized the Spanish authorities for not allowing voting to take place. The club also held a game in a completely empty stadium as it did not allow spectators to enter its premises. Catalonia firefighters created a human shield between the Spanish police and the civilians to ensure the voting took place.  Thousands took to the streets to protest the violence.

Our assessment is that the acrimonious split between Catalonia and Spain could have been averted if the government in Madrid had acted more prudently. Millions of people including leaders of labor unions, football clubs, firefighters, who all represent populist sentiments have turned against the government. We feel that an intervention by the European Union at the highest level is necessary so that the two parties could be brought back to the negotiating table. It does not augur well for Spain to have a break-up especially when Southern Europe is just recovering from decades of slow economic growth. Alternatively, an independent Catalonia may resuscitate other secessionist across Europe.