Tens of thousands in Middle East have continued to protest US President Donald Trump’s recognition of Jerusalem as Israel’s one true capital. The violence has resulted..

Tens of thousands in Middle East have continued to protest US President Donald Trump’s recognition of Jerusalem as Israel’s one true capital. The violence has resulted in the deaths and injuries of multiple Palestinians. Israel has also begun air raids on specific Palestinian targets.

Israel is the world's only Jewish state. The Jews staked claim for a land of their own due to religious reasons. They trace their origins to Abraham, who they consider as their patriarch. A number of Jews migrated to Europe predating the Roman Empire. In fact, they accounted for 10% of the population. Though a prosperous commune, the Jews were subjected to a wide range of restrictions and discrimination.

In 1917, Arthur James Balfour, the Foreign Secretary of Britain, wrote a brief letter to Baron Lionel Walter Rothschild, an influential Jewish citizen. He conveyed that the British government would support the creation of Jewish homeland in Palestine. This has come to be known as the Balfour Declaration. Around this time British troops took control of Palestine.

In 1947, United Nations adopted a plan to partition Palestine into Arab and Jewish sections. In the immediate aftermath, the war between Arab nations and Israel took place. The Arabs were initially on the offensive, but their military resources dried up when the UN declared an arms embargo on the region. Only Czechoslovakia violated the agreement and provided weapons to Israel. In 1949, Israel signed a series of armistice agreements with the Arab nations involved. No peace treaties were signed and in 1967, Israel fought the decisive “Six Day War” against Egypt, Jordan and Syria. 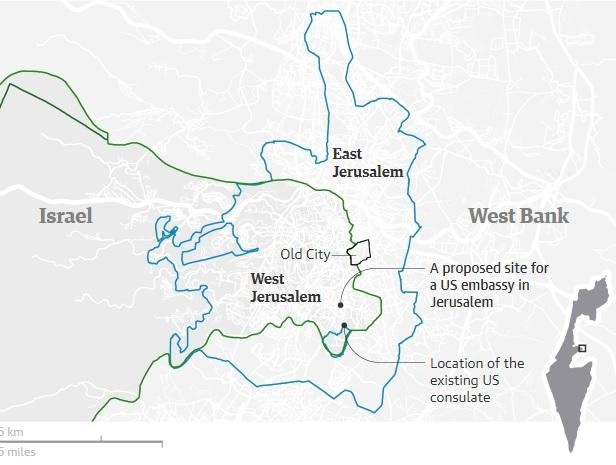 On December 6th, 2017, US President Donald Trump pivoted from decades’ long US foreign policy and recognized Jerusalem as the capital of Israel. The international community has never recognized Israel's claim to the entire city.

Within minutes of Trump’s announcement, US embassies in Turkey, Jordan, Germany and Britain issued security alerts urging Americans to exercise caution. Palestinians have blasted Trump’s decision. Mahmoud Abbas, the President of the State of Palestine and Palestinian National Authority said, “The decision by President Trump will not change the reality of the city of Jerusalem and will not give any legitimacy to the Israelis on this issue. We will achieve national independence.”

Trump’s announcement triggered a wave of protests and violence across Middle East. More than 10,000 people have protested so far, a week after the announcement. Four Palestinians were killed and hundreds more were injured as protests in Gaza and West Bank turned violent. The Palestinian protestors threw fire bombs at the police and rolled burning tires. Jerusalem is the site of the famed Al Aqsa mosque and tens of thousands who came to worship there have also stayed back to protest.

Muslim countries have also unified from the region to condemn the actions of the US President. Turkey’s president has announced that Muslim majority countries will be seeking an “annulment” of the US President’s decision from the United Nations. Countries like France have also expressed their unease over the latest developments.

Israel for its part has launched a series of air raids against Palestinian targets days after the announcement. In total, at least eight Palestinians have been killed by Israel. The nation has also arrested more than 260 Palestinians in occupied West Bank and Gaza.

Our assessment is that the US President’s words have triggered a bout of violence in the region. It has also unified the Muslim nations against Israel and the US during this sensitive period. The Palestinians are unlikely to ever concede East Jerusalem, and this could hinder the current plans among the moderates on both sides for a Two State solution that would put an end to the decades’ long conflict between Palestine and Israel.