The View from China

The Eleventh Special Emergency Session of the UN General Assembly put into sharp focus the regional differences towards Russia's Ukrainian adventure. As the West continued with its diplomatic and economic barrage against the invasion, accepting nothing less than a unilateral withdrawal of Russian forces from Ukraine, there was an uneasy silence amidst some nations from Central and South Asia. While many nations opted to abstain from any anti-Russia vote, the spotlight has, of course, been on China and, to a lesser extent, India.

Finding themselves hemmed in from all sides by the U.S. and its allies, Moscow and Beijing have been slowly but inexorably drawing closure, leading to allegations of an emerging China-Russia axis. Three weeks before the fateful day of February 24th, when Mr Putin launched his ‘special military operation’, there was a summit meeting in Beijing between the two strong men. Their concluding statements spoke of a ‘friendship with no limits’. Not surprisingly, there are now accusations from the anti-China-Russia camp that Mr Putin was given a green signal during the said meeting but requested to allow the Beijing Winter Olympics to be successfully concluded!

It is a well-recorded fact that Russia and China have shared positions on several global and regional issues. From an ideological perspective, both are trying to stem the spread of Western liberal values, not only domestically but also internationally. After the collapse of the Soviet Union with its successor Russian Federation reduced to a second-rate power, Mr Putin had sought the partnership of China to claw his way back to the high table.

For Beijing, too, the relationship with Moscow is a necessity. Its honeymoon with the West having been emphatically ended by the Trump administration, President Xi’s dream to lead China to a "peaceful rise" seemed to be over. Beijing needs strong strategic partners to face up to an increasingly hostile U.S. and the West and create its own strategic alignments to confront NATO and the Indo Pacific alliances like the Quad and AUSUK. China staunchly believes that its rise as a pre-eminent world power is pre-ordained, but it must have the geostrategic support of a powerful ally. Moscow fits the bill perfectly. Now with Russia allegedly requesting Beijing for military and economic help, the relationship has undergone a major change with China emerging as the senior partner. 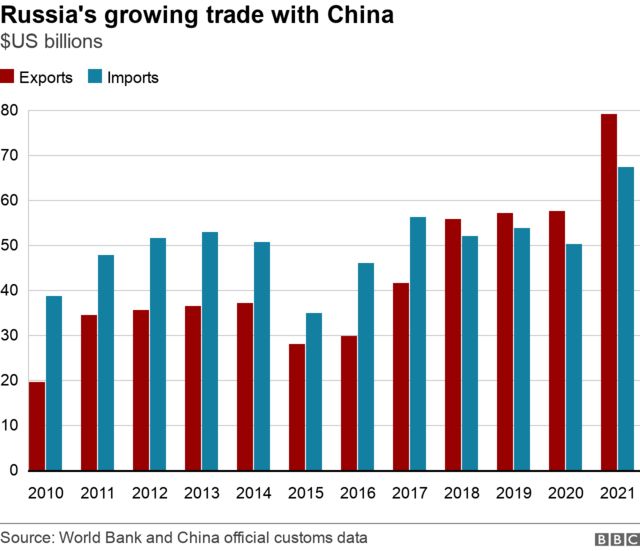 Ukraine has put China in a difficult position. The latter's interests do not necessarily align with Moscow in relation to this conflict. After all, it has had good diplomatic and trade ties with Ukraine for the past thirty years. However, under the current circumstances, China's foreign policy can no longer be ambiguous. Caught in a bind, Moscow must uphold its promises to Russia while preserving its profitable links with Ukraine and the West. Ukraine is an important trade partner with over $15 billion worth of trade recorded in 2020 alone. Even more important, with its large size and industrial strength, it is a pillar for the Chinese Belt and Road Initiative in East Europe.

Internationally, China has been a very vocal opponent of territorial revisionism, notwithstanding its own military expansionism in the South China Sea or in South Asia. It has refrained from recognising the Russian annexation of Crimea, and changing this policy in Ukraine would only hurt its image as a responsible rising global power, especially to its global constituency in Asia, Africa, and Europe.

The U.S. and the EU are unambiguous in their response towards any country that goes to aid Mr Putin, either militarily or economically. Any such move will come with a high cost which China may not be prepared to pay, especially when it does not endorse such unilateral changes to sovereign boundaries. When President Xi and President Biden held a virtual summit on March 18th, President Biden did not mince his words warning his Chinese counterpart of the severe consequences if Beijing provided military or economic assistance to Moscow. President Xi maintained that China could act as a peacemaker in the ongoing war.

In the long-term perspective, President Xi needs a reliable partner in his quest to balance out the emerging coalitions in Indo-Pacific, and Russia is the only viable option. Against this backdrop, Chinese officials have avoided using the word invasion in relation to the Russia-Ukraine war. At the same time, they have called for a dialogue to resolve the situation while blaming the U.S. for stoking tensions in the region. On an international platform, China has backed the Russians by calling their security concerns legitimate.

At home, the Chinese media is not covering much of the war, with online discussions being censored. Social media posts that are considered partisan have been taken down. According to Doublethink lab, which tracks disinformation in real-time, the Chinese media is regularly amplifying disinformation and conspiracy theories from Russian sources. For example, unsubstantiated stories about the Ukrainians setting their own nuclear power plants on fire have found traction in China. The Russian state media also has a presence in mainland China, where most other foreign sources are blocked or censored heavily.

In addition to this, the Chinese have been helping the Russians by buying farm and energy products that the latter cannot sell because of Western sanctions. However, Beijing has not yet helped Moscow to evade financial sanctions or provided direct military assistance.

A widely articulated view is that Russian success in Ukraine will embolden China in forcibly unifying Taiwan through a swift military campaign across the Taiwan Straits. Beijing has been quick to scotch any comparisons between the two situations. As per Chinese spokespersons, there “is no comparison between Ukraine and Taiwan – the former is a sovereign state, and the latter is not a full UN member but a unique polity, seen as a renegade province by Beijing”. There are clear indications that militarily, China has been gearing up for this contingency for several decades now. It has systematically increased its defence budget to modernise cyber, air, naval and amphibious capabilities. Taiwan, like Ukraine, has also not been sitting idle. With its deep military ties with the U.S., it too has been busy hardening its defensive perimeter. But its isolated location and the absence of sympathetic and ready-to-help neighbours will condemn it to a lonely battle. If the western economic sanctions succeed in delivering a crushing blow to the Russian economy, the Ukrainian war would be a good deterrent for China's military ambitions.