After months of negotiations, it was announced that Republicans had finally struck a deal on the tax overhaul. This includes steep corporate and individual rate cuts..

After months of negotiations, it was announced that Republicans had finally struck a deal on the tax overhaul. This includes steep corporate and individual rate cuts.

The United States is the largest economy in the world in terms of nominal GDP. The U.S. GDP was estimated to be $18.46 trillion in 2016. The U.S. dollar is the currency most used in international transactions and is the world's foremost reserve currency.

US President Donald Trump has long promised a comprehensive overhaul of the current tax structure. He has stated that a tax reform will rejuvenate the US economy. The administration had also promised a significant tax cuts to corporates. The administration as well as the Congress (Republican majority) aimed to slash the corporate tax to 20 per cent and largely end the taxation of non-US earnings.

Speaking about the need for tax reform, Trump told a rally in Indiana in 2017 that the current tax code was “outdated.” He noted, “Our country and our economy can’t take off as they should unless we dramatically reform America’s outdated, complex and burdensome tax code. It’s a relic. We’ve got to change it. Have to compete, compete with other countries.”

In an earlier statement the White House criticized the tax code and note, “For far too long, the tax code has been rigged in favor of well-connected special interests.  This legislation cuts taxes for middle-income families and empowers American businesses to create more jobs, increase wages, and propel our economy toward a brighter future.  This Administration looks forward to working with Congress to make tax reform a reality by the end of the year.” 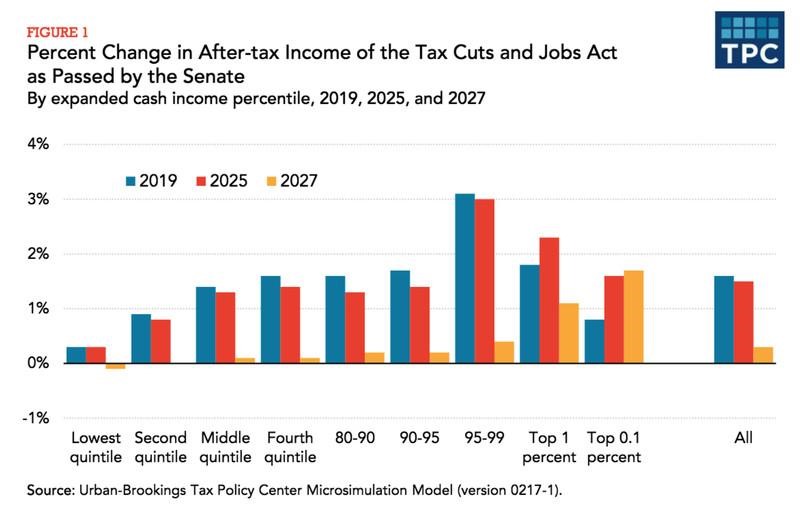 After months of negotiations, it was announced that Republicans had finally struck a deal on the tax overhaul. This includes steep corporate and individual rate cuts.

According to this new agreement, there will be a 37% top tax rate for individuals. In addition, the corporate tax rate would be 21% which is higher than was initially proposed. This would begin from 2018. Earlier there was a proposal from the US Senate that this will be delayed until 2019. Currently the corporate tax rate has been kept at 37%. Additionally, "Pass-through" businesses that pay taxes through the individual side of the tax code would get a 20 percent deduction.

One of the most controversial aspects of the plan has been the repeal of individual mandate in Obamacare. This is a $338 billion health care cut that will leave 13 million more people uninsured by 2027. The Trump

Tom Donohue, head of the US Chamber of Commerce, the biggest corporate lobby group, said: “Today’s announcement is good news for American families and employers. Tax reform will help families who are struggling to make ends meet and employers who want to grow their business and create new jobs.”

Steve Rosenthal at the Tax Policy Center, a think-tank, said: “What is most interesting is how ill-formed this plan is. We have been waiting months and months for a Trump plan. They promised us a plan, then delivered principles. They promised us a plan again, then delivered a nine page skeleton with wide margins. So, where’s the beef? We have yet to see anything of any content.”

In terms of individual taxes, the current seven existing brackets has been collapsed to three: 12%, 25%, 35%. It also eliminates of deductions for state and local taxes. Under the new tax cut, there will be a top tax rate of 25% for partnerships and many small businesses.

“We’re not trying to write a bill,” said a senior administration official. “We’re trying to provide a framework and we’re trying to leave some of these details to the [congressional] committees. We are committed to making sure the tax code is at least as progressive as the existing tax code and does not shift the tax burden from high-income to low-and-middle-income taxpayers”

Bernie Sanders, a leading liberal voice in the Senate who unsuccessfully sought the Democratic presidential nomination last year, called the bill “a moral and economic obscenity.” He said, “It is a gift to wealthy Republican campaign contributors and an insult to the working families of our country.”

This plan which will be put to vote next week may not pass. Three Republican senators, Susan Collins, Jeff Flake and Mike Lee remain undecided. Republicans currently hold a slim majority in the Senate.

Our assessment is that the tax cuts proposed by the Trump administration are extremely business friendly. We believe that legislation will face some problems. Under Senate rules, some legislations can pass only with 51 votes only if it doesn't increase the long-run deficit. So the current draft of the legislation would probably need 60 votes instead, meaning significant Democratic support, which Republican leaders haven’t been trying to court. They need legislation that can pass with 51 votes, and for that, they need the bill to not raise the long-term deficit.