The Treasury departments targets prominent commanders for their involvement in “ethnic cleansing” of Rohingya Muslims. The US imposed these sanctions as part of the Global Magnitsky Act, which empowers the administration to sanction those who violate human rights abuses worldwide. Myanmar is a country located..

The US Treasury department targets prominent commanders for their involvement in “ethnic cleansing” of Rohingya Muslims.

The US imposed these sanctions as part of the Global Magnitsky Act, which empowers the administration to sanction those who violate human rights worldwide.

Myanmar is a country located in South East Asia, bordering India and Bangladesh on the West and North West, Thailand, China and Laos on the East and North East. It has a population of fifty-three million people, a majority of whom follow Theravada Buddhism; and a minority Muslim population.

The Rohingya are an ethnic Muslim minority group from Myanmar’s western Rakhine state. Their origin can be traced back to the 15th century when thousands settled in Myanmar from the Arakan Kingdom. Practising a variation of Sunni Islam, there are reportedly one million Rohingyas in Myanmar. The government of Myanmar has, however, refused to recognize them as one of its ethnic groups. They do not get legal protection from the government and the processes for them to get a citizenship are incredibly hard and often impossible.

Read more about our in-depth analysis of the Rohingya Refugee crisis here, here and here. 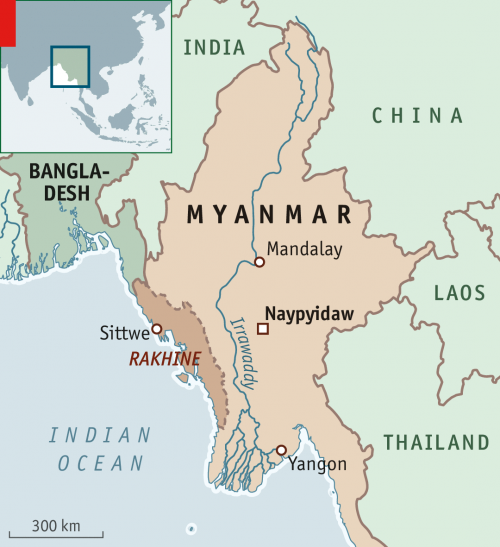 This is the firmest U.S. action against the Myanmar military since it launched a brutal campaign against the minority group about a year ago.

The move comes as the State Department readies a comprehensive report on atrocities in Rakhine in August. The study could include findings on whether the military committed crimes against humanity or genocide against the Rohingya Muslims.

Human rights groups and experts have accused the military in Myanmar of waging a premeditated campaign against the Rohingya, disputing its explanation that it was merely responding to militant attacks on police posts.

The army’s weeks-long clearance operation in Rakhine resulted in allegations of rape, indiscriminate killing and the torching of Rohingya homes.

Khin Hlaing was specifically sanctioned for his role in Shan state, in the country’s north, in actions against ethnic Kachin and Chinese minorities.

The Treasury Department for months has had the names of Myanmar military commanders responsible for actions against the Rohingya. But the United States has been slower than other Western nations to respond to the atrocities, while it determined the most appropriate foreign policy response.

Washington is well aware of the risk that sanctions or tougher actions against Myanmar carry; pushing Myanmar closer to China, its neighbour to the north. The military’s actions against the Rohingya have boosted its popularity within the country, and Myanmar’s de facto civilian leader, Aung San Suu Kyi, has not spoken out strongly against the atrocities.

Other NATO countries have been swift in their criticism of the Burmese regime. Canada and the European Union sanctioned other high-level leaders in June over similar accusations.

Fortify Rights, Amnesty International and other rights groups argue that sanctions must include the commander in chief of Myanmar’s military, Min Aung Hlaing.

Others, however, have argued that sanctions — which block their targets’ assets in the United States and prevent U.S. businesses from working with them - will not harm the Myanmar army, which has few U.S. holdings.

“Sanctions will not affect the military,” said a former high-ranking Myanmar army official, speaking on the condition of anonymity because of the sensitivity of the issue. He argued that punitive actions, including prosecution at the International Criminal Court, would only harden its position.

“If you push the military too hard, they will behave in a much more extreme way — and then China will be very happy,” he added.

Our assessment is that the present US sanctions are a start but not sufficient enough to bring the perpetrators of violence to justice. As stated earlier, the military commanders targeted in the sanctions, do not hold any significant assets in the US for the sanctions to negatively impact them. We also feel that the US may prefer to tread carefully in condemning the military as they feel that this might corner Aung Sang Suu Kyi. We also feel that any harsh steps in the military will deliver Myanmar into the hands of its northern neighbour, China.