Mike Pompeo, the head of CIA has warned that Russia is set to continue its campaign of meddling in foreign elections by targeting the congressional midterm races in America. The director of the agency told the BBC he had not seen a “significant decrease” in Russian activity and his concerns extend to the House and Senate polls in November.

Mike Pompeo was a hard-line Republican congressman before President Donald Trump appointed him to direct the CIA. The former Tea Party representative from Kansas is seen as a Trump loyalist who has performed a delicate balancing act in managing frayed relations between the spy agency and a commander-in-chief who compared America's intelligence services to Nazis.

He has in the past played down findings by the CIA that the Russians attempted to influence last year's US election.

For more than a year the Trump-Russia affair has dominated front pages and mired the president's administration in controversy.

President Trump's campaign and transition teams have been accused of colluding with Russian agents to influence the US election in the Republican candidate's favour. US intelligence agencies, including the CIA and NSA, concluded with "high confidence" in 2016 that Russia was behind an effort to thumb the scale of the US election for Trump.

Both the Russian and US presidents have poured scorn on suggestions of collusion, with Trump calling it "the greatest political witch hunt in history".

At least 12 Trump associates had contacts with Russians during the campaign or transition, according to an analysis of public records by CNN, with at least 19 face-to-face interactions with Russians or Kremlin-linked figures and at least 51 individual communications.

The president's supporters point out that interactions with foreign nationals are routine during any White House campaign, but two Trump aides have admitted lying about the encounters.

How did Russia hack a US election?

US intelligence chiefs say Russia effectively ran a two-pronged operation. The first prong in mid-2016 allegedly involved sending rafts of so-called "phishing" emails to figures in the Democratic party - an unsophisticated method used by everyone from state-sponsored actors to low-level scammers for duping people into giving up their passwords.

Hackers gained access to the Democratic National Committee's systems and leaked tens of thousands of emails revealing the inner workings of the Clinton campaign and the party's operations, along with mundane, embarrassing details.

The second prong allegedly involved flooding social media networks, especially Facebook, with bogus stories designed to smear the Democrats and undermine the Clinton campaign. According to testimony by Facebook before Congress, Russia-backed content reached as many as 126 million Americans on the social network during and after election. 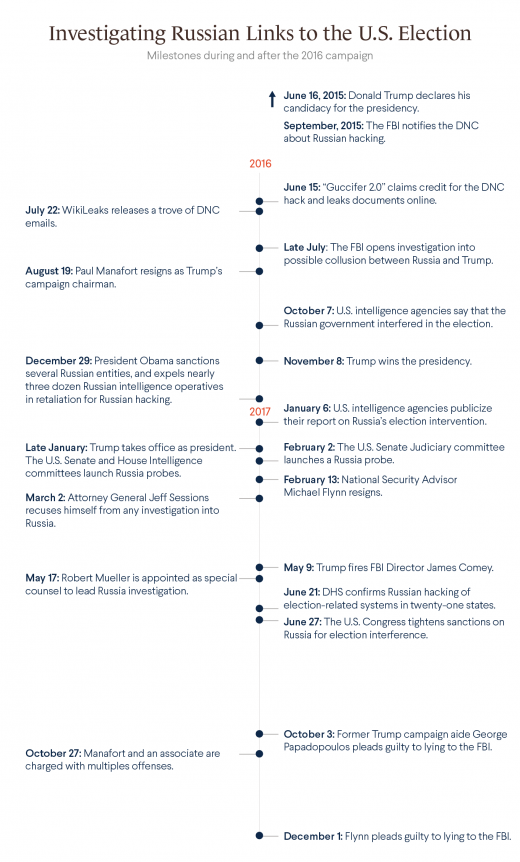 “I have every expectation that they will continue to try and do that but I’m confident that America will be able to have a free and fair election [and] that we will push back in a way that is sufficiently robust that the impact they have on our election won’t be great,” Pompeo said.

The US intelligence community has said that it believes Russia interfered in the 2016 presidential election. Mr Pompeo, who briefs the president most mornings, dismissed as "drivel" recent claims that US President Donald Trump was not up to the job.

In the BBC interview at CIA headquarters in Langley, Virginia, Pompeo said he believes that, despite cooperation in counter-terrorism, Russia is primarily an adversary and there has been no significant reduction in Russian attempts at subversion in Europe and the US.

But the former tea party Republican from Kansas also appeared to push back at reports that Trump has a short attention span and little patience for reading briefing documents. “We deliver nearly every day personally to the president the most exquisite truth that we know from the CIA,” he said. “He is very focused in the sense that he is curious about the facts that we present. He is curious in the sense he wants to understand why we believe them.”

Pompeo was also dismissive of Michael Wolff’s recent fly-on-the-wall book Fire and Fury, which fuelled speculation about Trump’s mental health. “It’s absurd. I haven’t read the book. I don’t intend to. The claim that the president isn’t engaged and doesn’t have a grasp on these important issues is dangerous and false and it saddens me that someone would have taken the time to write such drivel.”

Mr Pompeo said China was moving on the North Korea issue, as witnessed by recent votes at the UN, but there was still more they could do. North Korea's nuclear programme is high on the agenda. "We talk about him having the ability to deliver nuclear weapons to the United States in a matter of a handful of months," Mr Pompeo says.

"Our task is to have provided the intelligence to the president of the United States that will deliver to him a set of options that continue to take down that risk by non-diplomatic means."

The president and senior officials were "mindful" of the fact that all-out conflict could lead to massive destruction and loss of life, Mr Pompeo said. When asked if it might be possible to remove Kim Jong-un or prevent him from being able to launch nuclear missiles, he replied: "Many things are possible" - but did not elaborate further on what that might mean.

Our assessment is that It is unclear whether Russia’s influence campaign influenced the election’s results. U.S. intelligence agencies have not evaluated its electoral consequences. We believe, when it comes to law, the central question is not whether members of the Trump campaign coordinated or colluded with Russia, but whether they conspired with Russians to break a criminal statute, or whether they broke the law themselves.