Hamas and the official Palestinian government have begun dialogue towards reconciliation and unification of Palestine. Interestingly Palestinian Authority..

Hamas and the official Palestinian government have begun dialogue towards reconciliation and unification of Palestine.

The Gaza Strip, which is home to nearly 1.5 million Palestinians, is a narrow strip of land between Israel and Egypt. It is a self-governing Palestinian territory and it is under Israeli occupation. In 1948, the Strip came under Egypt’s control after the Arab-Israeli war. It was occupied by Israel in 1967 when the country engaged in military conflict once again with Arab nations.

In 2005, Israel pulled out its troops from Gaza. Thousands of Jews who were also in the region were also evacuated. Despite these developments, Israel has continued to exercise control over the region. It is in-charge of the region’s territorial waters and airspace as well.

In 2007, Hamas, a Palestinian Sunni-Islamic fundamentalist organization, engaged in warfare with Fatah forces. Fatah is a Palestinian nationalist political party. After ousting the Fatahs, the Hamas took over the governance in Gaza.  This resulted in the Gaza Strip getting split from the West Bank in terms of its administration. The majority of residents in the Gaza Strip are refugees.

On September 17, 2017, Hamas announced that the group had agreed to dissolve the rival administration in Gaza. It claims to be ready for the unification of the region and would contest for elections. It has also revealed that it is willing to form one government moving into the future. 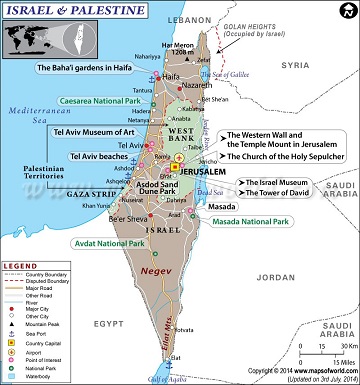 Hamas’ stronghold on the region has continued to weaken in the recent months. That’s because the Palestinian Authority President, Mahmoud Abbas continued to mount pressure on the group. He reduced the region’s power supply and reduced salaries of some employees living in Gaza. This meant that the residents of the region had to survive on just three to four hours of electricity per day. There were also restrictions placed on the supply of water and medical supplies. This left the Hamas with little choice but to seek reconciliation.

President Abbas has made it clear that any reconciliation will only occur if the Hamas agree to give up their armed forces. He also wants control of border and security and the functioning of the region.

Interestingly, Israeli Prime Minister, Benjamin Netanyahu seemingly has agreed with Abbas some of the conditions that have been put forth. The Israeli PM has been against the reconciliation talks. However, he said, “We expect anyone talking about a peace process to recognize Israel and, of course, recognize a Jewish state, and we won’t accept faux reconciliations under which the Palestinian side reconciles at the expense of our existence.” He also added that Hamas should recognize the State of Israel, dismantle their military wing and sever the relationship with Iran.

This is in sync with Abbas’ demands. He has said that Hamas would have to come under Palestine Liberation Organization (PLO) which has recognized the State of Israel. Even though Abbas and his government have said that they would never recognize the Israel as a Jewish state, Israel and Palestine have conducted formal talks in the past.  Abbas has also said that no nation with the exception of Egypt would be allowed to interfere in Palestine’s internal affairs – thus ruling out Iran’s role.

Our assessment is that Abbas and Netanyahu may find themselves becoming unlikely allies while trying to bring Hamas to toe the official line. However, it is still too early to predict to whether the reconciliation process will be successful or if talks will break down. We feel that if the Prime Minister of Israel supports the Greater Jerusalem bill, which endorses the annexation of larger parts of Jerusalem, this would not help in improving the scope for a negotiated settlement. The issue of settlement is quite sensitive as the current government needs the support of the right parties to have political legitimacy.