The Roads have been shut and a hazmat team was called after a pair fell ill at eatery close to where the ex-Russia spy was poisoned. Ties between the UK and Russia can be traced back nearly five centuries. The Russians and British were allies against Napoleon, and enemies in the Crimean..

The Roads have been shut and a hazmat team was called after a pair fell ill at eatery close to where the ex-Russia spy was poisoned.

Ties between the UK and Russia can be traced back nearly five centuries.  The Russians and British were allies against Napoleon, and enemies in the Crimean War of the 1850s. They were rivals again during the Great Game for control of central Asia in the late 19th century. They were allies again in World Wars I and II, although relations were strained by the Russian Revolution of 1917. During the Cold War, the UK remained a strong ally for the United States and relations with the Soviet Union were fraught. The end of the Cold War also established better ties between the two nations.

In March 2018, Sergei Viktorovich Skripal, a former Russian military intelligence officer turned spy for Britain′s intelligence services, was attacked. He and his daughter were found unconscious after falling victims to what was subsequently revealed to be a chemical nerve agent called Novichok. Skripal and his daughter, Yulia were both were hospitalized, critically ill. In addition, three police officers who responded to the crime scene also required treatment for breathing difficulties.

The spy poisoning incident was followed by a diplomatic falling-out. UK Prime Minister Theresa May stated that the nerve agent originated in Russia, and that it is “highly likely” that the Kremlin was behind the attack. As a consequence, UK, US and a number of allies expelled over 100 Russian diplomats who had supposed intelligence links, from their soil. Russia retaliated by expelling an equal number of US and UK diplomats. 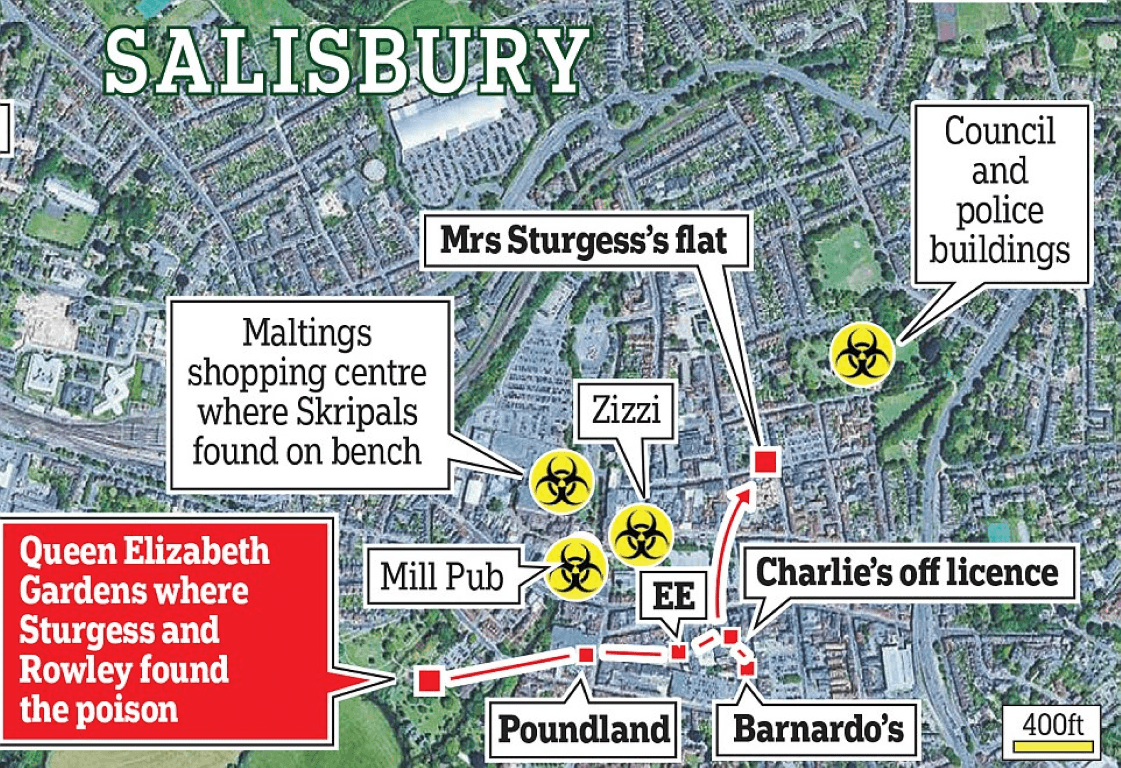 Read more about our latest in-depth analysis of the Skripal poisoning and the UK’s claims here.

British police closed roads and called a hazardous response team Sunday night after two people became ill at a restaurant in the English city where a Russian ex-spy and his daughter were poisoned with a chemical nerve agent.

Wiltshire Police described the emergency steps taken in response to “a medical incident” in Salisbury as precautions. The city spent months with quarantine tents and investigators in full-body protective gear combing for evidence after Sergei Skripal and his adult daughter were found unconscious on a bench in March.

Salisbury residents were put back on edge in June when a man and a woman living in a nearby town was hospitalized with signs of exposure to the same Soviet-made nerve agent, Novichok. The woman, 44-year-old Dawn Sturgess, died.

British prosecutors have charged two Russian men in absentia with poisoning Sergei Skripal and his daughter, Yulia. They have alleged Alexander Petrov and Ruslan Boshirov were Russian intelligence agents. The two accused as well as Moscow have denied the accusation in a televised interview with Russia’s state-run news agency, Russia Today (RT).

The pair, who are charged with conspiracy to murder, entered Britain forty-eight hours before the assassination attempt, travelling on official Russian passports issued in the false names they used. British prosecutors said there was enough evidence to charge the Russian pair with conspiracy to murder Sergei Skripal, himself a former GRU officer who sold Russian secrets to Britain before settling in Salisbury, Wiltshire.

There is no publicly-available evidence linking the two suspects to the Russian government and even their nationality may be different, considering that the police themselves say their passports may have been under false names. May’s accusations are based on “unverifiable intelligence” rather than evidence.

It is also possible that Skripal case is related to organized crime. Britain harbours a lot of Russian exiles who are called dissidents but are actually criminals.

Our assessment is that this case represents the collateral damage of a chemical weapon attack. Despite the UK voting for UNSCR 1540, which stresses on the state to protect its citizens from WMD attacks, we can see how difficult it is for any country to enforce it. We believe that this may prompt further discussion on how to effectively monitor WMD threats within national boundaries without causing diplomatic rows with other countries.