British Defence Secretary Gavin Williamson has announced the United Kingdom’s intent to sail their anti-submarine frigate USS Hopper through the South China Sea. This action is reportedly to assert the freedom of navigation rights. He has also urged the United Kingdom and Australia to “exercise leadership” in the region.

Beijing has responded with anger at similar actions from the US vessels in recent months.

The South China Sea is at the heart of a land and water dispute between China, the United States, and much of Southeast Asia. China’s claim to the region is historic going back to the Xia and Han dynasties. The US has maintained that the region was part of international waters. Other countries that are disputing the South China Sea include Malaysia, Indonesia, the Philippines, and Vietnam.

China has backed its expansive claims with island-building and naval patrols. The United States says it does not take sides in territorial disputes but has sent military ships and planes near disputed islands, calling them “freedom of navigation” operations to ensure access to key shipping and air routes. One of the reasons why the South China Sea is so vital to these countries is the strategic advantage it provides. If China had complete control of the region, it would be able to control a major trade route. It would be able to disrupt trade shipments that pass through this region to East and Southeast Asia. Currently $5.3 trillion worth of trade passes through the South China Sea.

The region’s strategic position isn’t the only reason why these nations are battling for control over the region. Natural gas reserves that exist in the region are estimated to total around 7,500 km³ (266 trillion cubic feet). Reed Bank, which is located near the coast of Philippines, is believed to hold large reserves of oil and natural gas. The region also holds reserves of minerals such as titaniferous magnetite, zircon, monazite, tin, gold, and chromite.

The island-city of Hong Kong is a former British territory. It was under the rule of the Crown from 1841 to 1997. The island was formally signed over to the British by China in 1898 in a 99-year lease. In 1984, the United Kingdom and China signed the Sino-British Joint Declaration regarding Hong-Kong. It was agreed that China would exercise its sovereignty over Hong Kong based on the “One Country, Two Systems” principle. The island was transferred back to Beijing when the lease expired on the 1st of July, 1997. 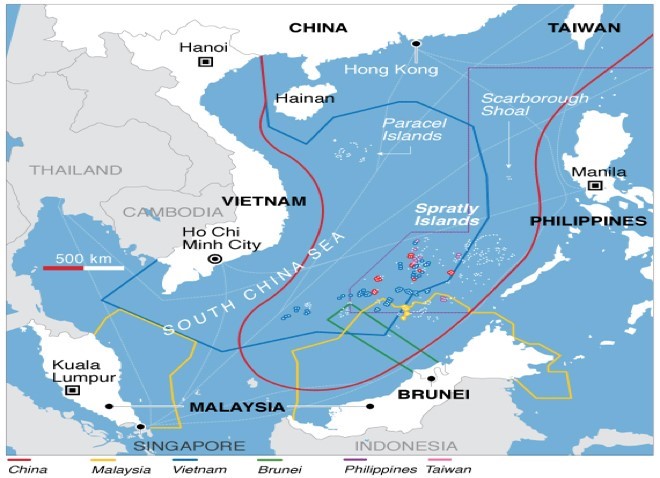 The United Kingdoms’ HMS Sutherland is scheduled to sail through the South China Sea on its return from Australia, according to British Defence Secretary, Gavin Williamson. “She’ll be sailing through the South China Sea (on the way home) and making it clear our navy has a right to do that,” he said in an interview with The Australian newspaper on the 13th. The HMS Sutherland is an anti-submarine frigate.

Williamson did not detail exactly how close the ship would sail to the disputed territory. The territorial limit of any nation is 12 nautical miles. He did, however, urge for the United Kingdom and Australia to “exercise leadership” in the region. “The U.S. is looking for other countries to do more. This is a great opportunity for the UK and Australia to do more, to exercise leadership,” he said. In a later interview, he added that the United Kingdom is looking to protect its interest from “any form of malign intent”, from China or other nations.

He added his belief that the region is “calm and tranquil” at the moment. “The situation on the South China Sea is also improving each day. We hope all relevant sides especially those outside the region can respect the efforts made by regional countries,” Shuang said.

Only last month, however, US warships drew Beijing’s ire after a missile destroyer came within the territorial limit of Huangyan Island (Scarborough Shoal), which is part of the disputed territory between China and the Philippines. The US at the time stated that it was a “freedom of navigation” operation; however, the Chinese Foreign Ministry accused Washington of “undermining regional peace and stability”.

Analyst Euan Graham told the Financial Times that he believes that this is merely a follow-up to a commitment made last year to assert these rights. “This is not a show of force by the UK and I doubt they will sail within 12 nautical miles of the Chinese defence installations on disputed islands in the region,” he said. While some believe that the intent is merely to express sovereignty, other commentators warn that any misinterpretation of whether or not the Hopper’s passage was “peaceful”, could lead to a resurgence of tensions.

Our assessment is that the United Kingdom is attempting to find a way to maintain power in the region, particularly since the loss of its former territory Hong Kong. Williamson’s comments suggest that the UK is looking to highlight its role as an important power and peace-keeper in the Asia-Pacific region. However, if Beijing believes that this action is intended to demonstrate support for its adversaries, it could lead to a souring of ties between the two nations.