US President Donald Trump has prohibited the $142 billion hostile takeover of Qualcomm by Singapore-based Broadcom due to security concerns..

US President Donald Trump has prohibited the $142 billion hostile takeover of Qualcomm by Singapore-based Broadcom due to security concerns. The Committee on Foreign Investment in the United States (CFIUS) had previously called for the acquisition to be postponed in order to review the deal, which it claimed could hinder the development of 5G technology in the US.

Qualcomm is an American semiconductor and telecommunications equipment company established in 1985. Based in San Diego, it is known for its investment in research and development. The company gains a significant portion of its profits from patent licensing and chip-making. Qualcomm played an important role in the development of CDMA and mobile technology through the 1990s. The company also played a role in the creation of the air interfaces used for 2G and 3G in the United States.

Qualcomm holds contracts with the United States Department of Defence, both classified and unclassified. The latter covers topics such as 5G and the Internet of Things.

Broadcom, a technology and semiconductor firm, was established in 1961. Originally a US firm, it was based in the United States until it was acquired by Avago Technologies in 2016, and relocated to Singapore. The company deals in wired infrastructure and wireless communications. It is currently in the process of shifting headquarters back to the US.

The current US administration has blocked a number of Chinese companies from acquiring American firms. Earlier this year, CFIUS stopped the $1.2 billion sale of money-transfer service Moneygram to Ant Financial, an affiliate of Chinese e-commerce giant Alibaba. Huawei, a Chinese telecommunications giant, had to cancel a deal with AT&T due in January.

In the February hearing of the Senate Intelligence Committee, FBI Director Christopher Wray said, "We're deeply concerned about the risks of allowing any company or entity that is beholden to foreign governments that don't share our values to gain positions of power inside our telecommunications networks”. The United States has repeatedly expressed its focus on developing 5G technology. A security memo released in January warned that falling back on 5G development could put the US at a “permanent disadvantage” to China. 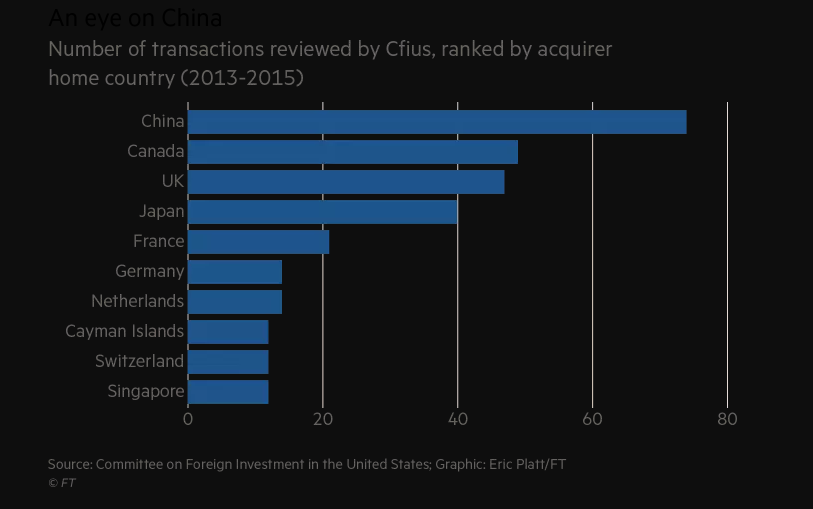 On Monday, President Trump released a statement calling off the takeover of Qualcomm by Broadcom.

"There is credible evidence that leads me to believe that Broadcom Limited...through exercising control of Qualcomm Incorporated… might take action that threatens to impair the national security of the United States," the presidential statement read.

The statement continued, "The proposed takeover of Qualcomm by the Purchaser (Broadcom) is prohibited, and any substantially equivalent merger, acquisition, or takeover, whether effected directly or indirectly, is also prohibited.” The same order also blocked Broadcom officials from running for Qualcomm’s board, and called for Qualcomm to hold a shareholder meeting “as soon as possible”.

Broadcom has said that it “strongly disagrees that its proposed acquisition of Qualcomm raises any national security concerns”. Only November last year, Trump had called Broadcom “one of the great, great companies”.

This is the second time that Trump has intervened directly to block a deal. During his eight year term, former President Obama blocked a total of two deals, and President Bush, one. All previous orders had to do with Chinese companies. However, the Qualcomm-Broadcom merger is the largest transaction to ever have been vetoed by a US president. Estimates have stated that the deal was worth up to $142 billion.

It is likely that this decision draws from the CFIUS letter released last week, which announced that Broadcom’s bid for Qualcomm was a possible “risk to the national security of the United States”. The investigative body stated that the takeover could result in lowered funding for Research & Development, allowing Chinese companies such as Huawei to gain an edge in the 5G race. The agency also said that defence concerns could emerge due to Broadcom’s ties with “third-party foreign entities”.

Mario Morales with the research group IDC, noted the importance of 5G, which he called a “crown jewel”. "Semiconductor technology and companies like Qualcomm will be an important weapon in that 5G arms race [and] the US like other nations and regions want to be first," he told the BBC.

Other analysts such as Reuter’s Robert Cyran pointed out the extent to which the US economy benefits from foreign capital. “After the recent corporate tax cuts, deficits are going to require continuing investor faith, too. Signals suggesting the country’s traditionally open doors are closing run against that need,” he wrote.

Our assessment is that the United States is highly sensitive to the entry of foreign entities into their telecommunication networks. As stated previously, we believe that the Washington is increasing scrutiny and tightening security. The US is growing increasingly wary of deals linking American businesses to foreign entities that can create a backdoor for international companies, especially those with Chinese ownership trying to surreptitiously access US marketspace.