US President Donald Trump has indicated that he is willing to soften his stance on sanction-hit ZTE, ahead of a second round of trade talks between US and Chinese officials..

US President Donald Trump has indicated that he is willing to soften his stance on sanction-hit ZTE, ahead of a second round of trade talks between US and Chinese officials. There have been increasing fears of a trade war between US and China since early this year.

Current US President Donald Trump has been vocally critical of China. He blames the country for the loss of jobs within the US. He has often criticised the “very unfair and one-sided” trade relationship. In 2017, China’s trade surplus with the United States was $347 billion.

In recent months, experts have sounded the alarm about an impending trade war between the US and China.  These fears solidified in March, when US President Donald Trump announced global import tariffs of 25% on steel, and China promised retaliation.  Since then, tensions have escalated. The US has imposed tariffs worth over $150 billion; Beijing responded with $50 billion worth of tariffs. China has targeted US agriculture in its sanctions, and commentators have noted that these tariffs could hurt US soyabean exports. China is the largest export market for American soyabean farmers, accounting for 56% of the $22 billion exports.

Meanwhile, the US has targeted Chinese technology. In April, Trump unveiled a list of Chinese imports that targeted sectors including robotics, information technology, communication technology and aerospace. Analysts noted that this list could target Beijing’s “Made in China 2025” policy. This policy, which stresses on development in 10 key sectors, including robotics, aerospace, computing and cloud, as well as clean-energy cars, is seen as an attempt to make China a global leader in high-end technology.

Washington has indicated that technology and telecommunications is an issue of national security. The US has banned a number of Chinese companies from making deals with US tech companies, including Huawei and Alibaba. The US has blocked Chinese efforts to acquire overseas semiconductors such as Xcerra, Lattice Semiconductor, and Aixtron. Washington’s “Section 301” investigation is currently inspecting alleged Chinese theft of US intellectual property. The US treasury is also investigating whether to use the 1977 International Emergency Economic Powers Act (IEEPA) to prevent Chinese companies from investing in sensitive US industries including 5G communications, semiconductors, and robotics.

In April, Washington slapped the Chinese multinational telecommunications equipment and systems company, ZTE, with a seven-year ban on purchases of crucial American technology. The sanctions were a result of the company illegally shipping US technology to Iran. Read more on this here. 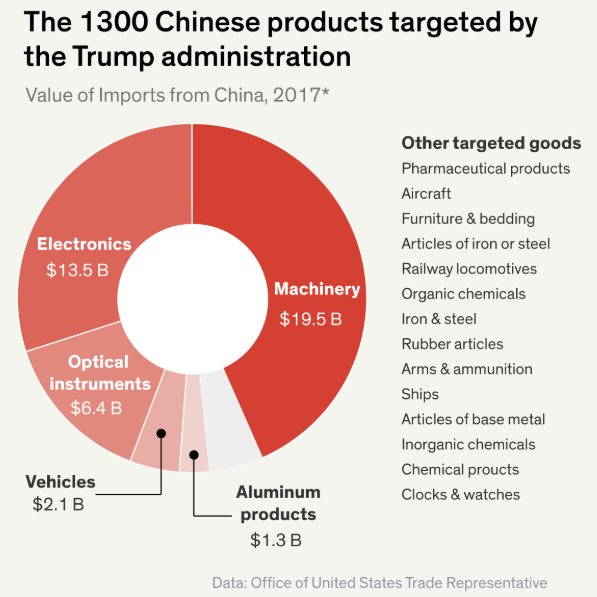 US President Donald Trump recently announced that he was working with Chinese President Xi Jinping to bring ZTE “back into business.” “ZTE, the large Chinese phone company, buys a big percentage of individual parts from U.S. companies. This is also reflective of the larger trade deal we are negotiating with China and my personal relationship with President Xi,” the President wrote on Twitter. Earlier this month, ZTE announced that it had shut down its major US operations sanctions. ZTE employs approximately 75,000 people worldwide.

During trade talks in Beijing earlier this month, US officials reportedly called for China to cut trade deficit by $200 billion. In return, Beijing demanded that the US lift the ban on ZTE, and end its restrictions on US exports of sensitive high-tech products. The talks, which were led by Treasury Secretary Steve Mnuchin and Chinese Vice-Premier Liu He in Beijing, were inconclusive. Vice Premier Liu is scheduled to visit Washington for a second round of talks this week, for “economic and trade consultations”, according to official Chinese news agency Xinhua.

Hours after Trump announced that he would reconsider the ban, Chinese regulators restarted their review of US-based Qualcomm’s acquisition of NXP Semiconductors. The $44 billion takeover had been delayed by a lengthy antitrust review. Qualcomm was among the US companies that sold parts to ZTE before the ban. Chinese semiconductor-related stocks fell after Bloomberg News reported the restart of the regulatory review.

Semiconductors are an area of vulnerability for China. The country spends more on imported silicon for its tech industry than it does on oil. China has therefore taken some pre-emptive steps to develop its own technology. Companies such as Xiaomi, Huawei, and Alibaba have reportedly invested in in-house development.

Analysts have noted that Trump’s position on ZTE could indicate a calming of tensions between the two nations. Earlier this month, Trump extended the deadline for Steel and Aluminium sanctions on European allies, which some believe may be indication that the President is willing to renegotiate. According to some sources, if the upcoming talks are not successful, tariffs could come into effect as early as this week.

Trump’s decision received criticism from both Democratic and Republican lawmakers. They have noted that presence of Chinese telecom companies in the US is not merely a trade concern,  but an issue of security. Additionally, Trump may have undermined his administration and their earlier position that ZTE had violated US export law. “Everyone has been explicitly saying this is not part of the trade conflict. And now the President has overtly linked it to the trade dispute for better or worse, and that is not good if you’re trying to maintain credibility,” one official told Reuters.

High ranking officials on both sides have indicated that the two countries may still be “very far apart” on resolving trade frictions. There have also been concerns that upcoming talks will revolve more around reducing the trade deficit, than addressing long-term structural issues such as intellectual property and technology transfer.

Our assessment is that the tariffs proposed by the Trump administration could have a dire consequence on China’s tech ambitions. China has admitted to a dependence on advanced US technology, especially semiconductors. We believe that Beijing could press for Washington to ease pressure on its tech sector in return for reducing trade barriers to US companies.

Recent events have also shown that there is an increasing confluence of economic and security interests in the United States. As stated previously, Washington is sensitive to the transfer of technology, telecommunications, and intellectual property. Could the two countries finally be headed on a reconciliatory path during the upcoming talks?