For the first time in two years, the US Dow Jones index suffered its steepest fall. The stock market index plunged by more than 600 points amid wider losses in US..

For the first time in two years, the US Dow Jones index suffered its steepest fall. The stock market index plunged by more than 600 points amid wider losses in US markets. This amounts to nearly a 2.5% fall. This was largely due to multiple US companies reporting less than robust earnings.

In 2017, the stock market both in the US and globally performed robustly. Technology companies have also played a crucial role in sustaining the bull market as stocks for companies like Apple, Amazon and Google have consistently risen in 2017. During the first few weeks of 2018, stock market indexes globally continued to perform well. In the case of the United States, the Dow Jones officially broke 26,000 points to reach a new historic high.

One of the biggest stock market crashes in history took place in 1929. It has been called the Great Depression and caused a global meltdown. The timing of the Great Depression varied across nations; in most countries it started in 1929 and lasted until 1941. It resulted in international trade being reduced by 50% and unemployment rose. Other major shocks to the equity markets took place in 1987 on “Black Monday”. The stocks had begun to decline when on Black Monday, the Dow Jones Industrials Average plummeted 508 points, losing 22.6% of its value in one day. The most recent and devastating stock market crash took place in 2008. Triggered by the sub-prime mortgage bubble, the stock markets crashed and this was followed by a global recession. Some estimates note that this financial crisis cost $15 trillion globally. 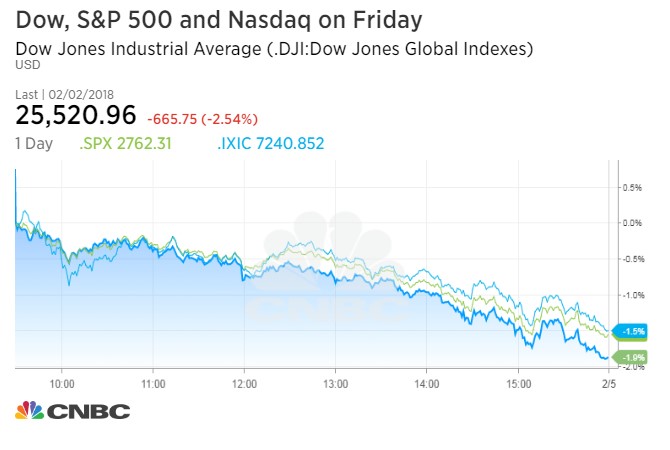 In the latter half of January 2018, the stock markets began to decline. For the first time since June 2016, the stock market witnessed its steepest fall. After several US based companies reported less than expected earnings, the Dow Jones fell to 25,520. The Standard & Poor’s 500 index dropped 59 points, or 2.1 percent, to 2,762. The S&P is down almost 4 percent since hitting a record high a week ago.

Some of the large US companies that reported weak earnings are Exxon Mobil and Alphabet. Apple and Chevron also fell. Nasdaq too performed poorly. The Nasdaq fell 144 points, or 2 percent, to 7,240.

Some experts have cautioned against panic and have commented on the recent slide as merely “growing pains”. Jason Draho, head of tactical asset allocation for the Americas at UBS, said in a note that the sell-off is due to markets adapting to above-trend growth. He also said that the normalization of inflation has led to a back-up in rates. "We continue to recommend an overweight to equities globally versus US government bonds in our tactical asset allocation," he said. "However, markets are likely to remain choppy as they adapt to this new growth and interest rate environment."

Geopolitics could also be to blame for the slide. Some analysts have noted that the tense trade ties between US and China could have made investors wary of the markets. Policy issues are also a reason behind the caution being exercised by investors as it is yet to be known how corporates will react to financial strategies and tax cuts. "There are still a number of question marks on the side of fiscal policy," said Lindsey Piezga, chief economist at Stifel Fixed Income.

Some analysts have taken a far more bleak outlook on not only the global stock markets but also economic recovery. David Brown, chief executive of New View Economics, has written, “World equity markets are taking their cue from the turnaround in global bond markets. Money market rates are too low, the recovery cycle looks overdone, inflation remains a nascent threat and the biggest bond market buyers, the central banks, are about to abort one of the biggest bond-fests in history. It is no surprise bond yields are pressing higher and borrowing costs pushing up.”

Our assessment is that despite the recent spate of downward slide of stock market indexes, the global economy is still expected to grow at a healthy rate. However, a further downward correction of 10 to 20 per cent seems probable. The global markets have reached a tipping point and it is now time for correction.