Sweden's general elections have resulted in deadlock after the two main centrist coalitions failed to win a majority and the far-right Sweden Democrats party made significant gains over immigration fears. Sweden is one of the largest countries in Europe with a population of 10 million...

Sweden's general elections have resulted in deadlock after the two main centrist coalitions failed to win a majority and the far-right Sweden Democrats party made significant gains over immigration fears.

Sweden is one of the largest countries in Europe with a population of 10 million. It has an open refugee policy even before the migration crisis hit the continent in 2015. Sweden was ranked seventh on the World Economic Forum’s Global Competitive Index. Historically, Sweden rose from backwardness and poverty into a highly developed post-industrial society. Sweden occupies a greater part of the Scandinavian Peninsula which it shares with Norway. Geographically, it is divided into three regions: to the north is Norrland, in central Sweden is Svealand and in the south is Gotaland. 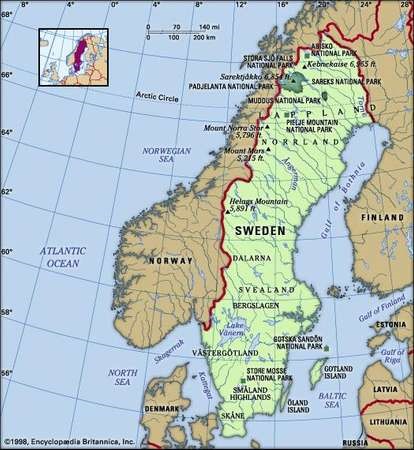 Sweden will face weeks of talks to form a new government after the end of the elections with its two main centrist coalitions failing to win a majority and the far-right Sweden Democrats making gains over immigration fears.

Sweden is the latest European country in which a populist surge fuelled by anti-immigration sentiment is changing the political landscape. With 84.4 percent of votes counted, the Sweden Democrats had 17.6 percent of the vote compared to 28.4 for the Social Democrats, according to the Sweden public broadcaster.

Sweden uses a system of proportional representation, under which each party is allocated a number of seats in each constituency that is broadly in line with its share of the vote.

Both of the main blocs have refused to govern with the far-right Swedish Democrats, although its leader said he was prepared to talk with all other parties. The final result will only come on Wednesday after overseas ballots have been counted.

The ruling coalition, headed by outgoing PM Stefan Lofven, is made up of his Social Democrats and the Green Party, and is supported in parliament by the Left Party. If Lofven decides he doesn’t want to step down, he will face a confidence vote in parliament two weeks after the election. If he loses the vote, the speaker of parliament will present a new candidate to become prime minister. If the incumbent fails to form a government, it opens the door to fresh elections within three months.

The centre-right Alliance is made up of four parties. Its candidate for PM is Ulf Kristersson, head of the Moderates. He said the ruling coalition had run its course and should resign.

The ruling centre-left bloc held the slenderest possible lead with 144 seats in parliament to 143 for the centre-right with 175 needed for a majority.

However, even though Sweden's economy is booming but many voters are concerned that housing, health care and welfare services have come under pressure from a wave of immigration during the 2015 migrant crisis.

Many voters are also concerned about the rising crime and violence. The SD links a rise in shootings to increased immigration, although official figures show no correlation. 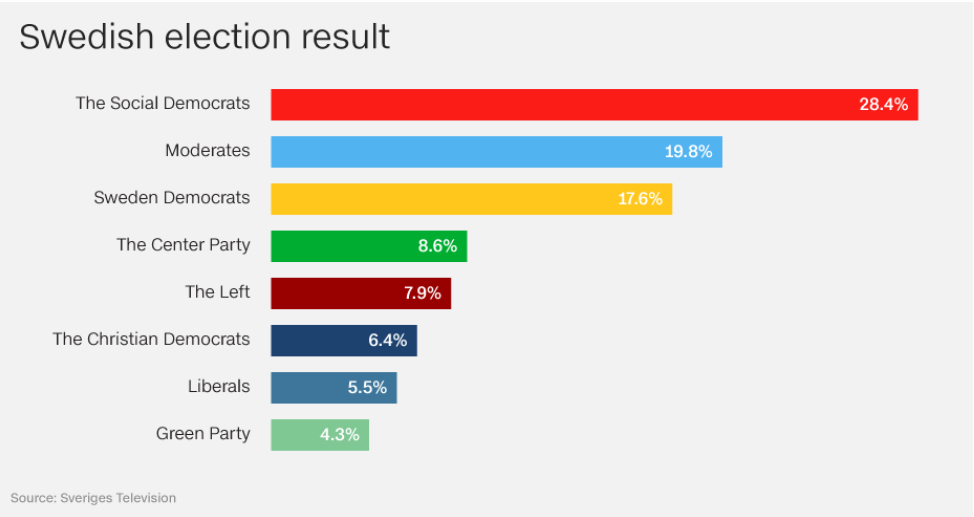 Our assessment is that Sweden faces a period of political uncertainty after an election that did not leave neither of the main parliamentary blocs with a majority. We believe that Swedes are looking for political alternatives and are quite disappointed with the way the country is run.  The Swedes are rooting for something different, not necessarily knowing what is the best.

We feel that the election outcome reflects not only the fact that the immigration issue was prominent in voters’ minds, but also the disappointment over the established parties.  We also feel that Brussels policymakers are watching the Swedish vote closely, concerned that a nation with impeccable democratic credentials could add to the growing chorus of Euroscepticism in the EU.