On the 30th of May 2022, Von Der Leyen, the president of the European Commission, announced a partial ban on Russian oil imports.  The EU has decided to ban 2/3 of its oil imported through the sea and is committed to reducing this further by 90 per cent by the end of the year.  The punitive and aggressive decision taken by the commission would have consequences that ripple throughout the globe.

In 2021, The European Union relied on Russia for almost 23 per cent of its total oil imports.  With Germany, Netherlands, and Poland being the highest importers, almost every country in the bloc has depended on Russia for at least half of their oil needs.

EU's decision to impose the ban came after weeks of wrangling, especially with Hungary, which is reliant on Russian crude oil delivered through the pipeline.  As a result, the commission has allowed landlocked countries to the south of the Druzbha pipeline (Hungary, Slovakia, and the Czech Republic) to temporarily be exempted from the ban.

According to the International Energy Agency, the EU consumed 2.4 million barrels of oil in a day.  The ban on 75 per cent of oil imports creates a huge supply gap in the EU market.  This is of dire concern, as the oil prices have soared higher, exacerbating the inflation rate to 8.1 per cent. 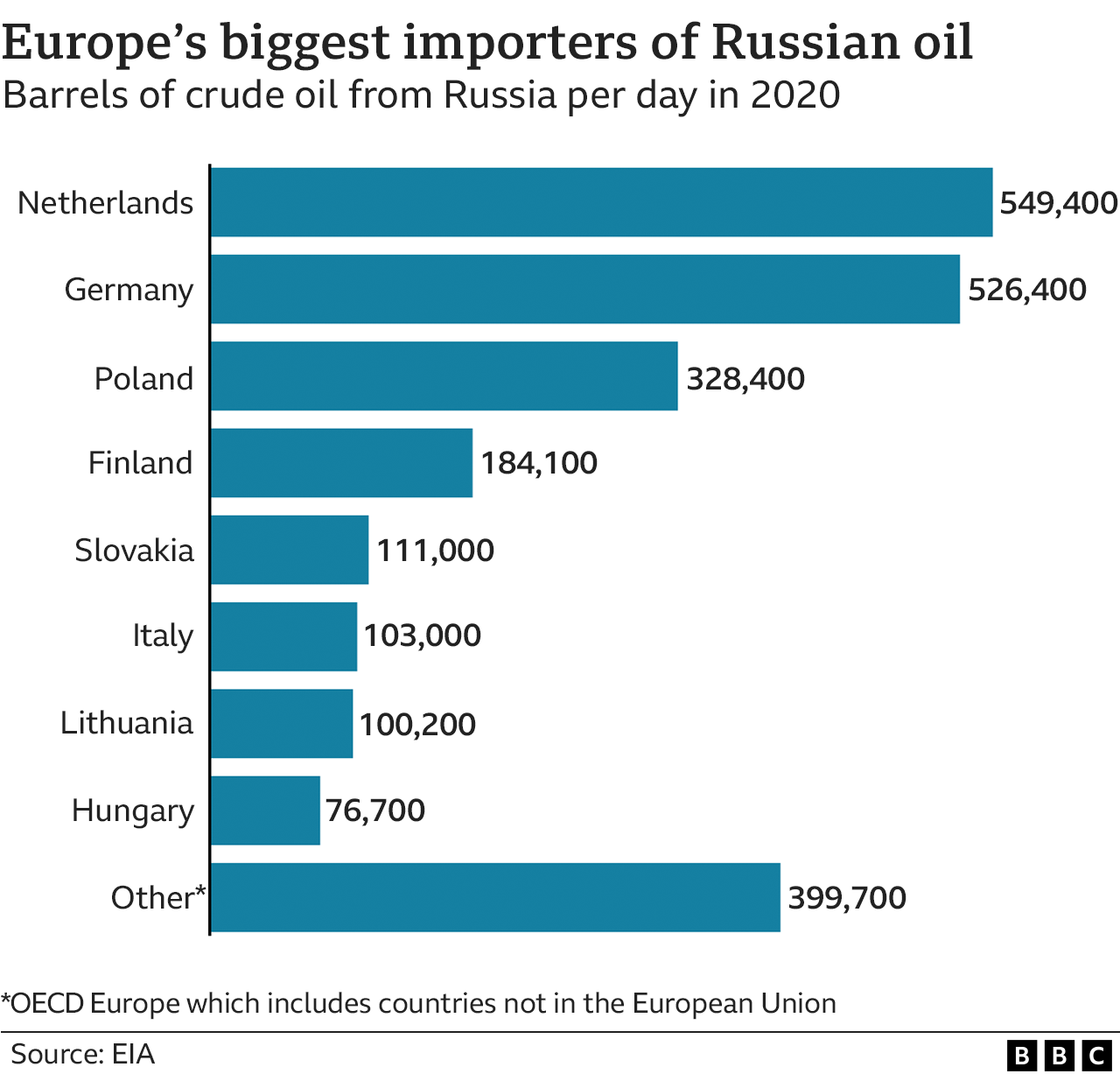 While the EU has banned the import of oil through tankers, the block still receives around 75000 to 80000 barrels of crude oil through the pipeline.  The sanctions will come into effect only in the next six months, and refined products can be imported till the end of the year.  Therefore, according to experts, this grace period would prompt countries to import more from Russia before it becomes illegal, to stockpile as much as they can.  It implies that the Russian economy might witness an influx of money, which would negatively impact the underlying decision of the EU to not fund the Russian attack on Ukraine.

The veritable repercussions of this decision are yet to be known.  A lot is determinant on who Russia will go to replace the European market and whom the EU turns to for their oil requirements.

If the EU were to indeed cut off the entire import from Russia, then the amount of oil availability in the global market would shrink drastically, affecting countries such as the U.S.  This would lead to an increase in commodity and fuel prices, contributing to an increased inflation rate.  Without the oil reserves from Russia, countries will have to find alternative sources to meet their demands and will have to develop transportation methods by incurring the cost.  This comes at a disadvantage to low-income countries, as they do not have the resources to meet the needs nor the ability to withstand such sudden and large changes.  To aggravate the situation, Russia could even retaliate by cutting off energy supplies to certain countries, as Putin has already done with Bulgaria and Poland.

According to the official data released by the Indian oil ministry, the country has been lagging in crude oil production.  In 2021-22, India produced 2.63 per cent lower crude oil than the year before and 11.67 per cent behind the targeted output rate.  Hence, strategically, the Government of India has defended its policy decision to import from Russia to cater to the domestic demand.

India received above 34 million barrels of discounted crude oil since the war broke out between Russia and Ukraine.  With the EU ban on oil from Russia, the heavily discounted oil is sold at 40 dollars per barrel, which is way under benchmarks prices.  But the sustainability of this decision seems flaky, given the consistent political pressure and changes in the global supply chain market.  This could also attract sanctions from countries that are insistent on cutting Russian energy out of the market.