Prime Minister Narendra Modi’s government has missed its target to electrify every home by the end of 2018. 1.05 Million homes in four states still lack power. The government is likely to achieve its target ahead of Indian Republic Day. The Saubhagya Scheme or Pradhan Mantri Sahaj Bijli Har...

Prime Minister Narendra Modi’s government has missed its target to electrify every home by the end of 2018. 1.05 Million homes in four states still lack power. The government is likely to achieve its target ahead of Indian Republic Day.

The Saubhagya Scheme or Pradhan Mantri Sahaj Bijli Har Ghar Yojana is an Indian government project to provide electricity to all households. The project was announced in September 2017 by Prime Minister Narendra Modi, who said that the aim was to complete the electrification process by December 2018. The total outlay of the project is Rs. 16,320 crore while the Gross Budgetary Support (GBS) is Rs. 12,320 crore.

Certain households identified via the Socio-economic and Caste Census (SECC) of 2011 will be eligible for free electricity connections, while others will be charged Rs. 500. The beneficiary household will get five LED lights, one DC fan, one DC power plug. It also includes the Repair and Maintenance (R&M) for 5 years. 91% of rural Indian households have received electricity access till August 2018. While the scheme would provide the capacity for electricity in poor and rural households, it did not solve the problem of power outages and made no provision for cases where households could not afford electricity bills. 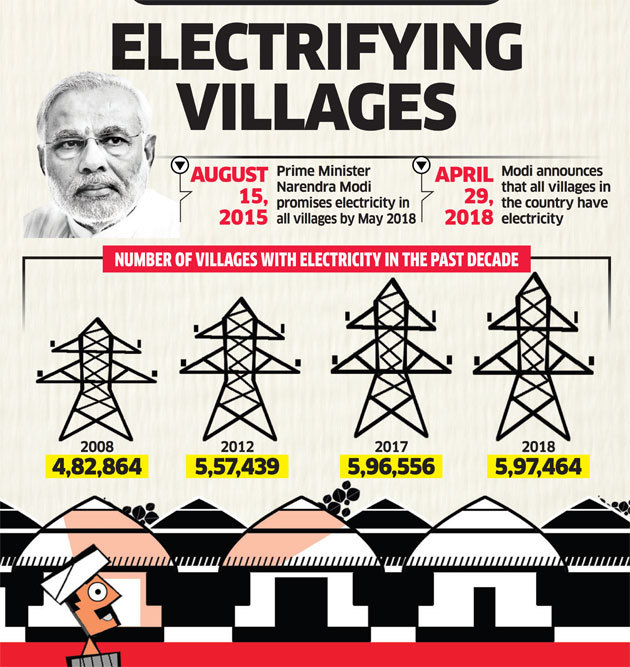 Under the Saubhagya scheme, it has energised 2.39 crore out of the targeted 2.49 crore households. The official website that monitors progress in providing electricity, the Saubhagya dashboard, showed that government has electrified 95.72% households, while 4.28% or 10,68,160 were still left to be energised in Rajasthan, Karnataka, Assam, Chhattisgarh, Meghalaya and Arunachal Pradesh.

The government had initially targeted March 31 as the deadline for taking electricity lines to all households in the country that seek a connection. It later said the target would be met three months earlier, by December 31. Power Minister R.K. Singh reaffirmed as recently as late November that the government would meet its December target.

“The houses that remain to be electrified are the most challenging ones to reach, and that shouldn’t take away from the unprecedented work done,” said Abhishek Jain, who leads energy access practice at the Council on Energy, Environment and Water in New Delhi. “The attention now needs to shift to service quality, including regular billing and reliable supply. Without that we run the risk of several consumers getting disconnected in the long run.”. Work in some regions has been delayed because of reasons such as legal tussle over a tender, recent assembly elections and difficulties in working in areas affected with Naxal violence” they said.

Achieving full energy access has been one of Modi’s key reforms amid his outreach to rural communities. The central government has set several milestones for its rural electrification plan since Modi came to power in 2014. Uttar Pradesh, which hosted close to half of the targeted unelectrified households, has achieved 100% electrification, a statement issued by the power ministry said. In October 2018, Bihar completed its target of 100 per cent electrification of households under Saubhagya scheme.

On December 31st, PM Modi addressed the nation in the radio broadcast program ‘Mann Ki Baat’. He said that electricity has reached every village of the country and the world agencies recognise that India is pulling its citizens out of poverty at a record pace.

The opposition has claimed that the Saubhagya scheme is a repackaging of UPA government’s programme which was launched in 2005 called as Rajiv Gandhi Gramin Vidyut Yojna under which 2.14 crore BPL households were provided free electricity connections while over 1.7 lakh villages had been electrified. However, the government failed to adequately publicise the achievement in this sector.

Explaining Congress' stand, JM Scindia said, "During UPA tenure, we electrified close to one lakh seven thousand villages over a period of 10 years which works out to be roughly 11,000 villages per year. That is our achievement and that is our contribution to our country. BJP's contribution is 18,500 villages over a period of four years. So they have been able to accomplish in four and a half year, what we accomplished in a year."

Our assessment is that achieving 100 per cent household electrification target is a milestone if it is complemented with more reforms at the state utility level. We believe that the success of this program will benefit rural India.