Rupee weakens to its lowest

India’s economy can be described as a developing economy. It is the world's seventh-largest economy by nominal Gross Domestic Product. It is also the third largest economy in terms of Purchasing Power Parity (PPP). However, it ranks at 141 in per capita GDP (nominal).

In 2018, Goldman Sachs Group, Inc, a multinational finance company downgraded India's economic forecasts. It had initially projected India’s growth to be at 8% for the financial year 2018-2019. In a note, the bank’s analysts have explained that the growth rate is now expected to be at a more modest 7.6%.

Money is organic nature that would keep changing depending on the society and its economic conditions. A country’s currency is linked to their economy and the policies that govern the economy. Over the years, the value of any currency has depended on factors like inflation, employment, interest rate, growth rate, trade deficit, foreign investment and several macroeconomic policies. Balance of payment which comprises of the trade balance and capital flow would affect the value of a country’s currency. As a governing body, the RBI would manage the value of the rupee by controlling the supply which would either make it cheap or expensive.

Globally, petrol and diesel prices vary in accordance to crude oil prices, processing and distribution costs. It also depends on local demand, the strength of the currency and taxes; and on availability. Petrol prices aren’t standard in India. It varies from city to city in the country. These prices depend on state taxes as well as on import locations. Due to production cuts adopted by OPEC nations, the value of oil has begun to rise. This has also been aided by geopolitical tensions in Middle East region. On April 24th, 2018, international oil prices hit their highest levels since late 2014. The price of oil climbed higher than $70 and Brent crude futures, the international benchmark for oil prices, climbed as high as $75.20. 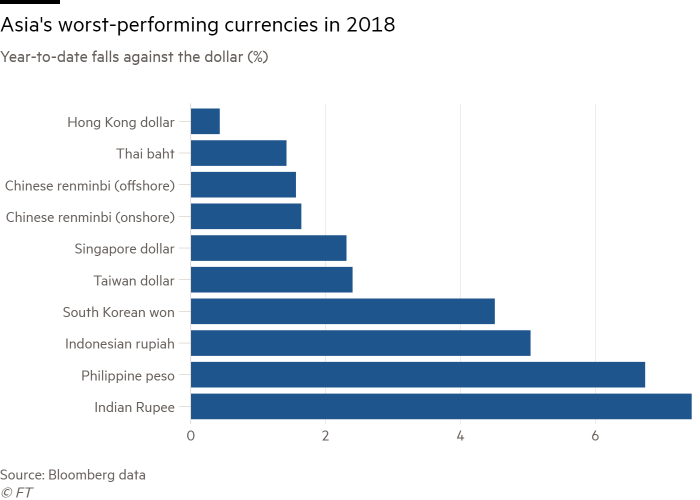 According to estimates, the rupee is the worst-performing currency in the Asia Pacific region this year, down 7.4 per cent against the dollar.

“Given India’s current-account deficit, there is a need to fund it, but we are on track for a fifth consecutive month of bond outflows and the equity market has also been experiencing outflows,” said Khoon Goh, head of Asia research at Australia & New Zealand Banking Group Ltd. in Singapore. Without a turnaround, the rupee may weaken past 70 per dollar, he said.

Here's how the rise in oil price immediately affects India’s economy. According to Nomura Holdings Inc, every $10 rise in the oil price worsens India’s current-account balance by 0.4 percent of gross domestic product. It also pushes up inflation by 30-40 basis points.

Another reason as to why the value of rupee has weakened could be due to rising trade tensions between US and India. Mark Linscott, assistant US trade representative, and Indian officials recently concluded a two-day summit meant to calm trade tensions. However, the value has plummeted nonetheless. US is India’s top export destination. India enjoys a trade surplus of almost $30bn. US President Donald Trump has been critical of that.

In addition, India’s central bank, Reserve Bank of India has recently increased the interest rates. There is also indication that RBI could be intervening to stem the pace of the currency’s decline as India’s foreign-currency reserves have fallen in eight of the nine weeks to June 15th, 2018. It should also be noted that rising concerns of a US-China trade war have also fuelled a sell-off in other Asian currencies. This could have also played a role in the rupee’s decline.

Our assessment is that the rupee’s value is likely to drop a little below 70 in the near future. We believe that the rise in oil prices would negatively affect the Indian economy. India, which depends on imports to meet 80% of its oil needs, will have to spend approximately Rs. 9,200 crores more every year for a one dollar per barrel increase in crude prices. Given that US is preparing to slap Iran with fresh sanctions in the near future, it is highly likely that oil prices will continue to climb. This would surely affect the common man the most. Trade tensions between US and other nations including India and China is also likely to have a profound effect on the economy.