Robots to take over?

Automation and robotics have continued to become more popular in a number of industries across the world. However, what does the accelerated pace of automation mean..

Automation and robotics have continued to become more popular in a number of industries across the world. However, what does the accelerated pace of automation mean for industries and the people who work in them? Are jobs at risk?

Automation and robotics have become one of the fastest growing fields across the world. The rise of Artificial Intelligence has proven that multiple kinds of jobs that were previously handled by human beings can now be conducted by robots.  Richard Susskind, UK government advisor and visiting professor at Oxford Internet Institute, and his son Daniel Susskind, lecturer at Oxford University have detailed this future trend in their book, Future of the Professions: How Technology will Transform the Work of Human Experts. Daniel Susskind has noted, “It’s hard to escape the conclusion that there will be less for people to do,” tells Quartz. “If machines and systems take on more and more tasks, as we see them doing, then it begs the question: What will be left for people?”

Proliferation of robots with associated benefits of no labor costs, machine efficiencies and round-the-clock working, could bring virtually unbounded prosperity to mankind. It also raises substantial questions. Will there be relevance for individual wealth? Would humans need to work for a living? Would nations build on Finland’s experiment and provide ‘basic income’, to all its citizens. 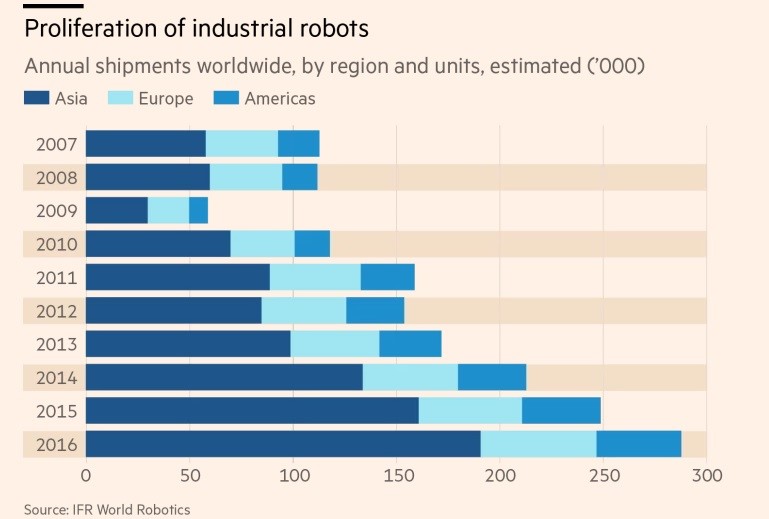 In recent months the chief executive of Deutsche Bank, John Cryan, has hinted the bank could cut tens of thousands more jobs in favor of automation. In an interview with Financial Times he said, “We employ 97,000 people. Most big peers have more like half that number. There we’ve got the most to gain. We’re too manual, which can make you error-prone and it makes you inefficient. There’s a lot of machine learning and mechanization that we can do.”

Cryan’s sentiments have been echoed in a number of industries where people’s jobs are being replaced by robots and automation. “The robotics market has been growing strongly over the past four to five years, and we are optimistic that the market is going to continue to grow over next three years,” says Per Vegard Nerseth, head of robotics at ABB.

A report by McKinsey has confirmed fears that automation can ideally replace a lot of human labor. Research by the consultants showed that about 30 per cent of tasks in 60 per cent of occupations could be automated. However, Nerseth states that concerns over job loss and increase in unemployment due to automation are misplaced. He notes, “Today the main challenge for very many companies [is] they’re not able to find enough people to do the jobs and in that sense robots actually create jobs. It’s very difficult to see today that robots are actually taking [jobs] away. I would say we are helping companies to become more competitive and efficient.”

Our assessment is that the transition from human labor to machine labor, should fundamentally alter the way humans live. However, the immediate impact of the transition will have a disruptive impact on employment, income and normal human-pursuits.