China has agreed to begin negotiations with the Association of Southeast Asian Nations (ASEAN) on a code of conduct over operations in South China Sea.

China has agreed to begin negotiations with the Association of Southeast Asian Nations (ASEAN) on a code of conduct over operations in South China Sea.

Rival countries have wrangled over territory in the South China Sea for centuries, but tension has steadily increased in recent years. China, Vietnam, the Philippines, Taiwan, Malaysia and Brunei all have competing claims.

China has backed its expansive claims with island-building and naval patrols. The US says it does not take sides in territorial disputes, but has sent military ships and planes near disputed islands, calling them "freedom of navigation" operations to ensure access to key shipping and air routes. One of the reasons why the South China Sea is so vital to these countries is due to the strategic advantage it provides. If China had complete control of the region, then it would be able to control a major trade route. It would be able to disrupt trade shipments that pass through this region to East and Southeast Asia. Currently, $5.3 trillion worth of trade passes through the South China Sea. 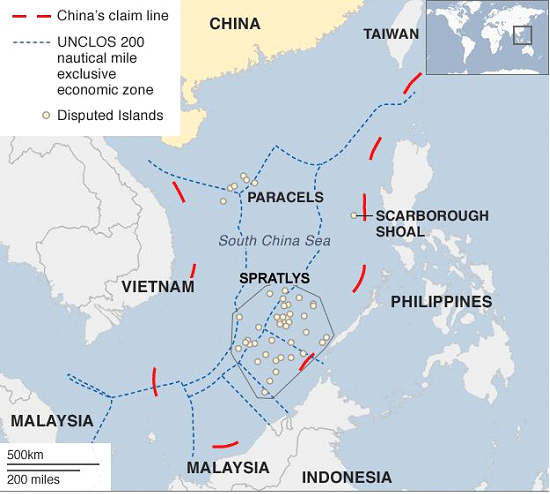 For the past 15 years, the parties have tried to come to agreement on a code of conduct (COC) with regards to operations in South China Sea. However, the best they have done, so far, is to agree on a loose "framework" for a COC.

Chinese Premier Li Keqiang said that these talks were imperative in stabilizing the region. Li addressed the leaders of ASEAN noting, “China's greatest hope is for peace and stability in the South China Sea. We hope the talks on the code of conduct will bolster mutual understanding and trust. We will strive under the agreement, to reach a consensus on achieving early implementation of the code of conduct.”

Ian Storey, a senior fellow at Singapore-based ISEAS-Yusof Ishak Institute, noted that the plan to manage the maritime feud took decades before taking some shape. "If past is prologue, this (code of conduct) process is likely to be protracted and frustrating, especially for Southeast Asian countries who are keen to have a legally binding, comprehensive and effective COC in place as quickly as possible," Storey wrote in a report released in August.

Meanwhile, US President Donald Trump during his recent visit to Vietnam offered to moderate between the various parties. China, for its part, firmly rejected the offer. On Monday, Chinese foreign ministry spokesperson Geng Shuang was asked to comment on Trump's offer. "We hope that countries outside the region respect the efforts made by regional countries to maintain peace and stability in the South China Sea and play a constructive role in this regard," he told reporters in Beijing.

In addition, Southeast Asian nations issued a statement after one of the scheduled meetings being held at ASEAN noting that they will not be taking the relative calm over the South China Sea for granted.

Our assessment is that an agreement to talk on the details of the code of conduct is only an incremental move. It is unlikely that all parties will come to a final agreement anytime soon. Despite a period of relative stability in the South China Sea, some countries at the summit have voiced concern that this shouldn't be taken for granted.