By recommencing trade and investment negotiations with Brussels, New Delhi hopes to counter Beijing’s role in the global value chain.

Hailed as a watershed moment for the India-EU strategic partnership, Prime Minister Narendra Modi has participated in a virtual summit with 27 European heads of state, along with the Presidents of the European Council and the European Commission. Hosted from Portugal, this is only the second time that such a hybrid arrangement has been employed in the aftermath of Brexit. Only two months ago, the first ‘EU+27’ meeting had been convened with U.S. President Joe Biden to bolster transatlantic relations. The extension of this rarely used format to India signals the level of importance that Brussels accords to bilateral ties, as it amplifies its role in the Indo-Pacific.

Apart from this symbolic gesture, the two sides have marked a key milestone in their mutual relationship by resuming negotiations on free trade and investment agreements. They have also agreed to establish a comprehensive ‘Connectivity Partnership’ that incorporates digital, energy, transport, and people-to-people connectivity. Dedicated dialogues on regulatory cooperation, supply chain resilience and artificial intelligence are some of the other areas that were touched upon.

As the COVID-19 pandemic ravages the world, New Delhi and Brussels have stressed the importance of multilateral institutions in combatting the virus and facilitating economic recovery. They have also organised an India-EU Business Roundtable to coincide with the Leaders' summit so that greater cooperation can be forged in healthcare, climate change and digital transformation.

By embarking on such ambitious endeavours, India and the EU appear well-placed to implement the ‘2025 Roadmap’ that prescribes a joint action plan for strengthening strategic relations. They have also provided fresh impetus to the 2016 ‘Global Strategy for the European Union’s Foreign and Security Policy’, which pivots the EU to Asia and places special emphasis on ties with India and Japan.

New Delhi and Brussels have come a long way since 2013, when several unresolved issues jeopardised trade negotiations. As can be recalled, the deadlock was primarily triggered by market access issues and Indian tariffs on wine, dairy, and automotive parts. Issues pertaining to data security, public procurement, and the EU’s resistance to visas for Indian professionals had also proven to be contentious.

Now, by agreeing to relaunch free trade talks, both sides are expected to pick up from their points of disengagement in 2013. India is especially keen to make its markets more attractive to the bloc, following its refusal to join the Regional Comprehensive Economic Partnership (RCEP). Any mutually beneficial trade agreement that matches the lucrative investment opportunities in RCEP-integrated China can further help Europe to ‘decouple’ its markets.

This political desire is complemented by the economic rationale that lies at the heart of the India-EU partnership. It is worth remembering that Brussels ranks first among India's trading partners, with exports being valued at USD 57.17 billion in 2018-19. Acknowledging this, the two sides have commenced negotiations on a comprehensive Free Trade Agreement (FTA), which includes separate but parallel tracks on trade and investment. 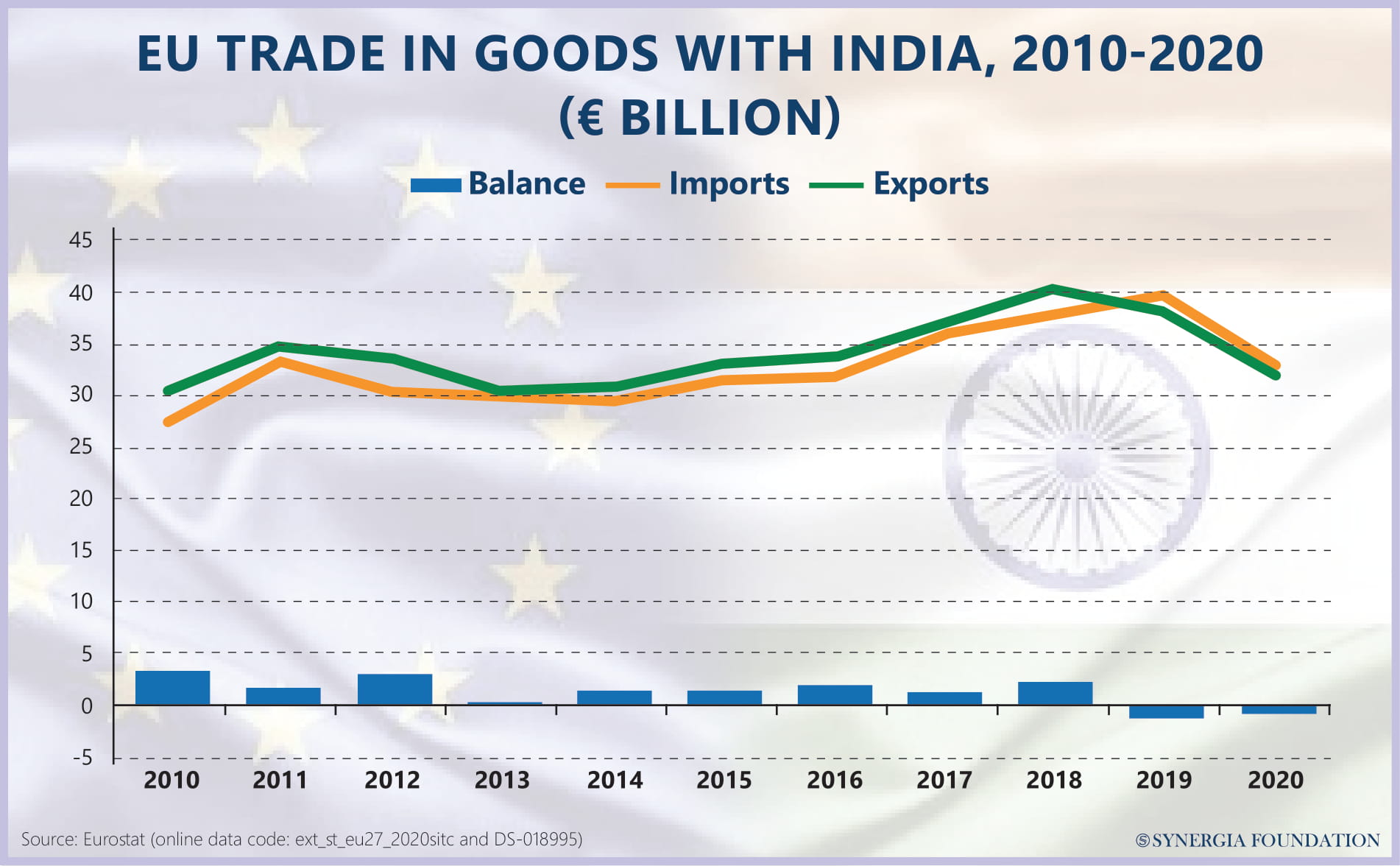 With close to $100 billion investment from its 27 member states, the EU is one of the largest investors in India. However, relations have run into trouble since 2015, when New Delhi unilaterally terminated all its Bilateral Investment Treaties (BIT). In the wake of the Cairn and Vodafone tax disputes, the Indian government had sought to implement a new model BIT that prevented foreign investors from opting for international arbitration in tax matters.

Presently, however, the country has liberalised its Foreign Direct Investment rules, fuelling fresh hopes about a high-quality investment agreement with Europe that prescribes investor-state dispute settlement mechanisms. New Delhi also hopes to side-line Beijing in the global value chain, at a time when tensions over Xinjiang have soured the EU-China relationship and frozen their comprehensive pact on investments. 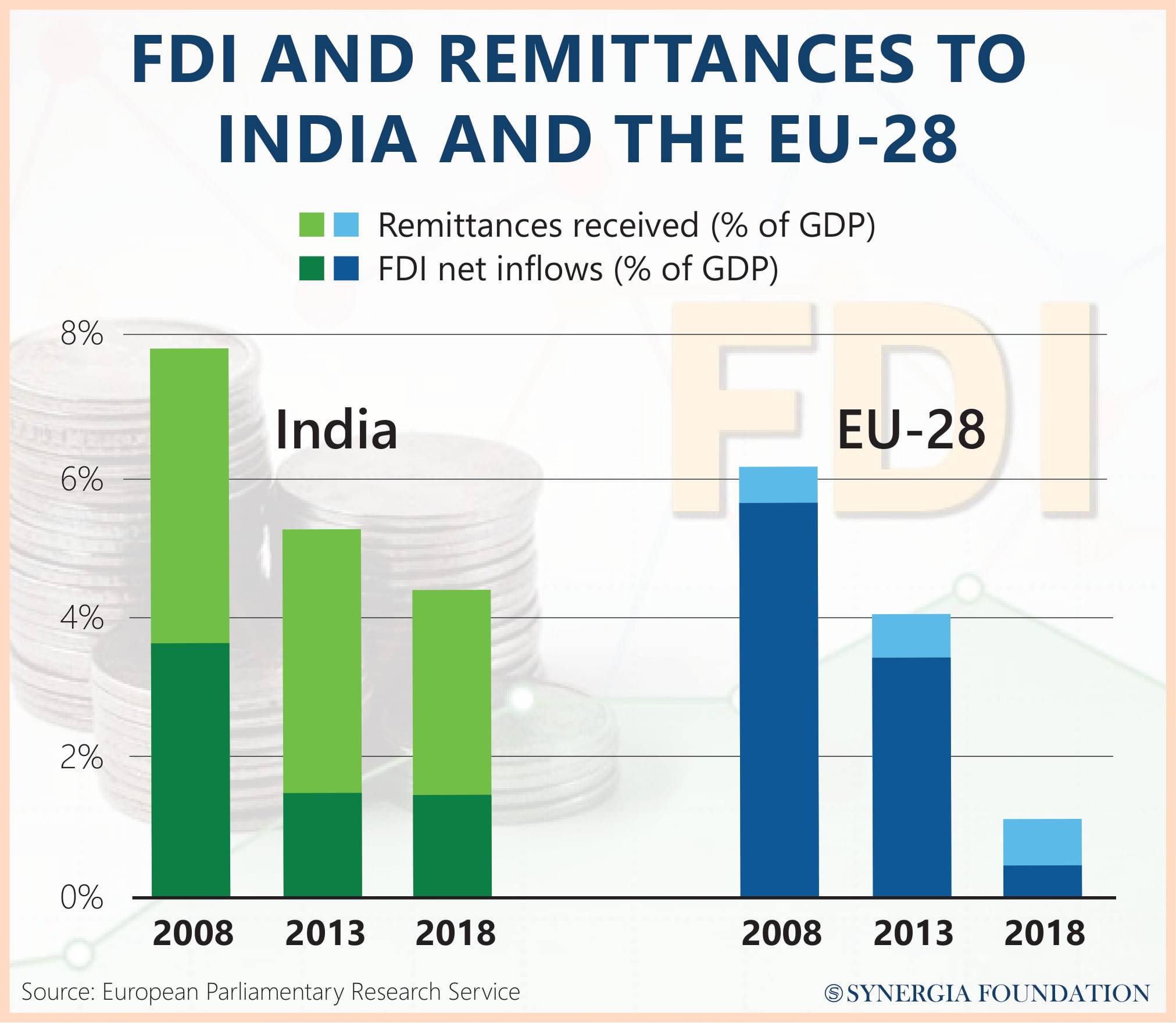 While no timeframe has been specified for the upcoming negotiations, a high-level mechanism has been instituted between the bloc’s trade commissioner and India’s commerce minister to steer deliberations on investment. It remains to be seen whether they can harness the full potential of economic engagement and work towards a stand-alone investment protection agreement in the near future.

A significant outcome from the India-EU summit has been the unveiling of a ‘connectivity partnership’ that catalyses public and private investments in joint projects across Africa, Central Asia, and the Indo-Pacific. Grounded in a rules-based system of international governance, they seek to link the transport, energy, and digital sectors in India and the EU, even while fostering people-to-people contacts.

By highlighting shared principles like sustainability and transparency, the two sides are offering an alternative to China's Belt and Road initiative (BRI). They hope to attract those economies which have fallen into the BRI's debt traps by way of partner state dependencies or 'assets for money swap' arrangements.

As part of this connectivity project, the European Investment Bank (EIB) has also signed a $150 million contract for the development of the Pune Metro rail project just a day before the Leaders' meeting. Furthermore, the EIB has focused on facilitating 'green, safe and affordable public transport' through additional investments in metro systems such as Lucknow, Bhopal, Bangalore, and Kanpur.

Over the coming days, New Delhi and Brussels are expected to initiate plans for regional connectivity by coordinating with the member states of the 'Bay of Bengal Initiative for Multi-Sectoral Technical and Economic Cooperation' (BIMSTEC). Aided by the financial heft and regulatory expertise of EU states, such frameworks can be deployed to further cooperation in sectors such as renewable energy and smart electricity systems. More broadly, they can be leveraged to signal a normative convergence between India and the EU when it comes to the development of the Indo-Pacific.