Qatar looks to capitalize on China’s growing demand for natural gas as well as expand its overseas investment and infrastructure. Qatar is a sovereign nation..

Qatar looks to capitalize on China’s growing demand for natural gas as well as expand its overseas investment and infrastructure.

Qatar is a sovereign nation in Western Asia, occupying the small Qatar Peninsula on the northeastern coast of the Arabian Peninsula. The country’s only land border is with Saudi Arabia to the south, with the rest of its territory surrounded by the Persian Gulf.

After the Ottoman rule in the early 20th century, Qatar came under British rule until its independence in 1971. The nation has been governed by the House of Thani since the early 19th century. Sheikh Jassim bin Mohammed Al Thani was the founder of the State of Qatar. It is a hereditary monarchy and its head of state currently is Emir Sheikh Tamim bin Hamad Al Thani.

Qatar is a high-income economy, from having the world’s third-largest natural-gas reserves and oil reserves. The country has the highest per capita income in the world. According to the UN, Qatar has a very high human development index and is widely regarded as the most advanced Arab state for human development.

In June 2017, Saudi Arabia, Bahrain, the UAE, and Egypt, among other Gulf states, cut off diplomatic relations with the country, accusing it of supporting and funding terrorism and manipulating internal affairs of its neighboring states, an escalation of longstanding tensions with Saudi Arabia. Read more: No negotiations, says Qatar.

The bloc insisted that Qatar unconditionally break its ties to mostly Islamist political groups, including the Muslim Brotherhood, adhere to Saudi and UAE foreign policy, reduce relations with Iran, close the Al Jazeera television network, and accept monitoring of its compliance. Qatar has rejected any infringement of its sovereignty and called for a negotiated solution. 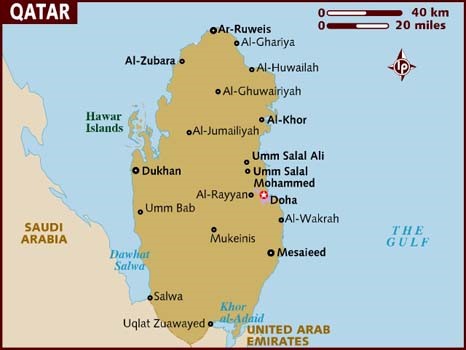 The Qatari Energy and Industry Minister Mohammed bin Saleh al-Sada said the country was the world’s top supplier of liquefied natural gas (LNG) and looks to increase production by 30% by 2024 to meet projected demand, particularly from East Asia. “We expect China will continue to import more because of its environmentally conscious policies. And we will avail ourselves to the demand,” he stated.

In 2017, China’s imports of LNG grew by 46% to 38 million tons, making it the second-biggest LNG consumer of the fuel after Japan. Qatar accounts for nearly one-fifth of these supplies.

China imported approximately 30 million tons of natural gas via pipelines and is on track to become the world’s biggest consumer of the fuel as a part of its initiative to replace heavily polluting coal as an energy source.

Al-Sada said the global supply of LNG had deteriorated as there are lesser new projects. However, Qatar has been working on gradually increasing its production by 2024, when the market would reach a balance. “Qatar’s incremental increase of 30% will be timely to satisfy this demand in the coming few years. Qatar has timed the production to coincide with the tightening market and this will help secure the demand of the East Asian countries.”

Al-Sada said Qatar has “an excellent cooperative relationship” with China, and that the diplomatic crisis of June 2017 did not interrupt its LNG supply. To restrict the economic fallout from the blockade, the Qatari government released billions of dollars to stabilize its financial markets and boost its economy.

Qatari officials reported that the boycott forced the country’s economy to be more diversified and paved the way for Chinese players to take part. Chinese citizens have visa-free entry to the country as a part of their bilateral relations. China Railway Construction Corporation and its local partner have signed a contract build the Lusail Iconic Stadium. China Harbour Engineering also carried out major construction works for the new Hamad Port in suburban Doha, which includes a free-trade zone to attract foreign investors in the sectors like manufacturing and IT.

Regarding financial alliance, in 2015, Qatar set up the first yuan clearance center in the Middle East and plans are in process for mutual listing of Qatari and Chinese exchange-traded funds in both markets.

Qatar’s boycott has had a positive impact on East Asian countries. India, Pakistan, Sri Lanka, Bangladesh, Indonesia and the Philippines, whose participation in the Gulf’s labor force, have already reaped benefits with Qatar, by reforming its controversial kafala system (a system used to monitor migrant laborers, working primarily in the construction and domestic sectors) or labor sponsorship regime requiring workers to receive permission from employers to change jobs.

With the loss of 20 destinations due of the boycott, the state-owned Qatar Airways, was most affected by the crisis. With an expected annual loss, Qatar Airways is looking to expand its route network elsewhere and weighing stakes in other airlines. The Asia-Pacific is a palpable target. Qatar is expected to initiate flights to Canberra in Australia, Chiang Mai and Utapao in Thailand, and Chittagong in Bangladesh this year. The airline has said it will not buy Air India, but it plans to move ahead with the launch of a domestic Indian airline. Qatar Airways also acquired a 9.61% stake in the troubled Hong Kong-based Cathay Pacific for US$662 million.

Irrespective of the crisis being resolved, the Middle Eastern countries are unlikely to return to the status quo soon. As a result, the crisis is likely to influence political, economic, and commercial relationships in the near future.

Our assessment is that China is presently working to negotiate a free trade agreement with the Gulf Cooperation Council, which includes Qatar. Qatar’s boycott has forced it to restructure trade relationships, diversify sources for goods and services, create alternative port alliances, and rectify its strategies. As a result, Qatar’s economy would be more independent and accelerate diversification. We believe that this could create opportunities for Qatar to strengthen its relationship with Asian nations; creating cooperation especially in the areas of construction, information technology, electronics, mining, textiles and tourism.