The problem with “Fake News”

As US President Donald Trump continues his verbal attacks on the free press, other populist leaders across the world are emulating the US President. They have also begun deeming unfavourable..

As US President Donald Trump continues his verbal attacks on the free press, other populist leaders across the world are emulating the US President. They have also begun deeming unfavorable news reports to be “fake news.” Does this set a dangerous precedent that would ultimately undermine governance?

US President Donald Trump has an enigmatic relationship with members of the media. Prior to becoming the President of the United States, he spent close to a decade hosting a reality TV show on the NBC network called The Apprentice. He has a love-hate relationship with the media. When he was campaigning for President, he would often directly make calls to news networks like CNN to offer interviews. However, he would also criticize media outlets repeatedly for what he deemed bias and “fake news.” In 2017, he took credit for coining the term “Fake news” and in the past has called CNN, New York Times, Washington Post and other news outlets by this moniker. He has often taken to Twitter to condemn news reports or journalists. He has particularly targeted a number of female journalists including Katy Tur and Mika Brzezinski. Despite criticism, reports have emerged that he spends hours a day sifting through network news on the television. Multiple times he has taken to Twitter to either comment on a news story that appeared on Fox News or criticize a news story that appeared on CNN.

In January 2018, he announced the “winners” of a new award for the media called the “Fake News Awards.”  Respected outlets such as New York Times and CNN were named in this list. Trump’s repeated attacks on the free press has incurred criticism from lawmakers across the aisle, including ones from his own Republican party. Senator John McCain has often implored the President to stop attacking the media.

In a scorching speech, Jeff Flake, a Republican Senator criticized the President over his use of the terms “fake news” and “enemy of the people”. Flake said that not only were such attacks shameful but were also reminiscent of words used by Joseph Stalin to describe his enemies. Flake specifically referenced Trump’s characterization last February of the news media as “the enemy of the people,” explaining the dark origins of that phrase. “So fraught with malice was the phrase ‘enemy of the people,’ that even [Soviet leader] Nikita Khrushchev forbade its use, telling the Soviet Communist Party the phrase had been introduced by Stalin for the purpose of ‘annihilating such individuals’ who disagreed with the supreme leader.” 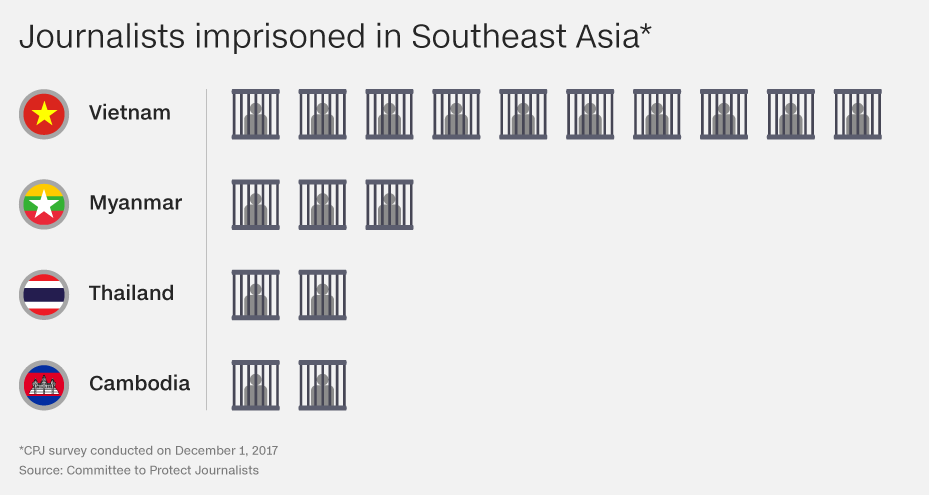 A number of world leaders seem to be taking cues from Trump in trying to undermine the news outlets. They are primarily nations that do not provide freedom to the press that is already guaranteed by the US. Previously, Venezuelan President Maduro complained to RT that the world media has spread lots of lies about Venezuela, adding, “This is what we call fake news today, isn’t it?”

A dangerous precedent was set when authorities in Myanmar began to openly question reports about the ongoing Rohingya refugee crisis. Those who fled the region of Rakhine spoke of horrific violence inflicted on Rohingya Muslims. However, recently, the U Kyaw San Hla denied the very existence of Rohingya Muslims in the region. “There is no such thing as Rohingya,” said an officer in Rakhine's state security ministry. “It is fake news.”

The nation has also arrested two journalists from Reuters agency who reported on the Rohingya crisis. Even Myanmar's de facto ruler, Aung San Suu Kyi dismissed reports of mistreatment of ethnic Rohingya in Myanmar's Rakhine State as a "huge iceberg of misinformation."

The problem is more prevalent in Philippines under the governance of populist leader, Rodrigo Duterte. He has condemned the media multiple times in the past. Most recently, an independent media outlet called Rappler came under fire. The Philippines Securities and Exchange Commission (SEC) announced that it would be revoking the agency’s license altogether.

"It's a worrying trend," says Shawn Crispin, Senior Southeast Asia Representative for the Committee to Protect Journalists (CPJ). "It looks as though they're taking cues from one of the countries that (traditionally) protected press freedom, the United States."

"What we're seeing now is, again, the term 'fake news' cropping up and that's what Duterte's used against Rappler," says Peter Greste, Professor of Journalism at Queensland University. "(That) follows President Trump's lead, in branding any news organization that he doesn't like, or any news organization which will publish a story that is uncomfortable to his government, as fake news."

Our assessment is that the frequent attack on the fourth estate is meant to undermine the spirit of liberalism that is guaranteed in a democratic society. The press plays a vital role in highlighting injustices that are meted out to the civil societies. We believe that populist leaders will continue to discredit traditional media and the challenge will be for the larger society to counter them.