Pope Francis, in his Easter address, called for peace in the Holy Land two days after 15 Palestinians were killed on the Israeli-Gaza border, saying the conflict..

Pope Francis, in his Easter address, called for peace in the Holy Land two days after 15 Palestinians were killed on the Israeli-Gaza border, saying the conflict there “does not spare the defenceless”.

Cardinal Jorge Mario Bergoglio was chosen as the 266th pope to succeed Benedict XVI in 2013. Pope Francis is the first Latin American and the first Jesuit to lead the Roman Catholic Church. At the time of his election, he received great support from both Church conservatives and reformers, being seen as orthodox on sexual matters but liberal on social ones.

His values led the way to reforms such as the "common touch" and his determination to improve the Curia (Vatican bureaucracy), curb corruption levels in the Vatican bank, and manage the history of child sex abuse within the Church. However, his head-on approach to resolving issues has created a growing number of opponents, both within the Vatican and outside.

In 1993, Israel and the Palestinian Liberation Organization signed the Oslo Accords, which are a set of agreements that establish the Palestinian Authority with limited administrative control of the West Bank and Gaza Strip. In accordance with the agreement, Israel continued to control the Gaza Strip's airspace, land borders (except Gaza's border with Egypt, abandoned by Israel in 2005), and territorial waters.

According to Israel, the Israel–Gaza Strip border is a security barrier allowing Israel to control the movement of people between the Gaza Strip and Israel, and stop the entry of arms. The border has considerably enhanced security in Israel. However, the barrier has invited opposition and protests from the Palestinians over the years.

In 2005, Israel independently withdrew its troops from the Gaza Strip, formally ending its occupation of the region. However, there is a lot of disagreement considering that Israel still continues to control Gaza's territorial waters and airspace. This led to Israel launching the Gaza War in December 2008, consisting of airstrikes and ground incursions against targets in the Gaza Strip. The war ended in January 2009, after both parties ceased military action. 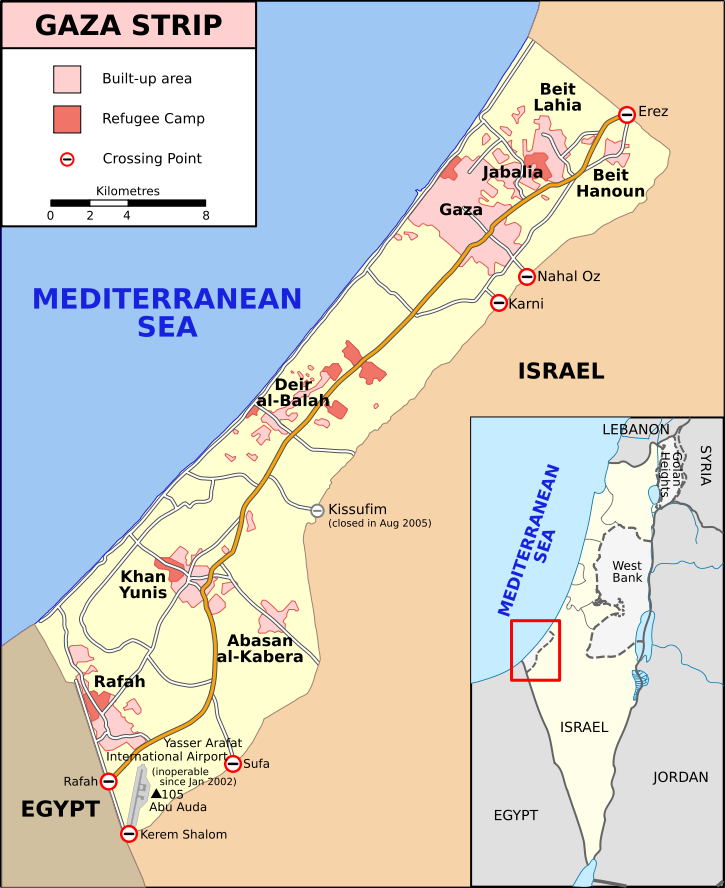 Pope Francis made his appeal in his “Urbi et Orbi” message from St. Peter’s Basilica. Urbi et Orbi denotes a papal address and apostolic blessing given to Rome and the entire world by the pope on solemn occasions.

He requested for an end to the “carnage” in Syria, demanding humanitarian aid to be allowed to enter, and for peace in South Sudan and the Democratic Republic of Congo. The Pope also referred directly to the violence that took place in Gaza last Friday. He called for “reconciliation for the Holy Land, also experiencing in these days the wounds of ongoing conflict that do not spare the defenseless.”

The Israeli Defense Minister has cast off any inquiry into the killings by the military during a Palestinian demonstration that turned violent at the Gaza-Israel border. However, UN Secretary-General Antonio Guterres, Federica Mogherini, the European Union’s foreign policy chief, and other leaders have called for an independent investigation into the deaths.

The Pope pleaded for peace for “the entire world, beginning with the beloved and long-suffering land of Syria, whose people are worn down by an apparently endless war. This Easter, may the light of the risen Christ illumine the consciences of all political and military leaders, so that a swift end may be brought to the carnage in course,” he said.

Pope Francis also called for international assistance in Venezuela, to aid its people during the ongoing economic and political crisis. He wished for “fruits of dialogue” in order to advance harmony in the Korean peninsula.

He prayed that this Easter “bears fruits of hope and dignity where there are deprivation and exclusion, hunger and unemployment, where there are migrants and refugees - so often rejected by today’s culture of waste - and victims of the drug trade, human trafficking and contemporary forms of slavery.”

Our assessment is that the Pope recognizes the need to spread peace and harmony across the world. He emphasized the need to reduce violence in the Israel-Gaza region. If the conflicts continue, it will compromise the lives of millions. Various other leaders join the Pope in acknowledging the need to work together in advancing peace talks and promoting diplomacy.