An analysis by American think tank, International Council on Clean Transportation, has revealed that Qantas is the least fuel efficient airline to operate in the Pacific. The report stated..

An analysis by American think tank, International Council on Clean Transportation, has revealed that Qantas is the least fuel efficient airline to operate in the Pacific. The report stated that it burns the most carbon of all major air carriers operating in the region. Air line emission accounts for about 2 percent of the world’s greenhouse –gas output.

The think tank also revealed that Hong Kong based Cathay Pacific lagged behind peers in fuel efficiency on an average. The study is based on 20 carriers that operated in 2016.

Aviation fuel is a specialized type of petroleum-based fuel used to power aircraft. It is generally of a higher quality than fuels used in less critical applications, such as heating or road transport, and often contains additives to reduce the risk of icing or explosion due to high temperature, among other properties.

Aviation has been a significant contributor to air pollution. This is because despite adapting more fuel efficient technologies and equipment, air travel has rapidly increased in the past 20 years. From 1992 to 2005, passenger kilometers increased 5.2% per year. In 2013, there was an average of 102,465 flights taking off on any given day. In 2017, commercial aircraft carried nearly four billion passengers, according to the International Air Transport Association (IATA). This is nearly double the number of just 12 years ago. According to aviation analysts Ascend, the total number of aircraft currently in service is approximately 23,600 - that includes passenger and cargo aircraft.

The International Council on Clean Transportation is an independent nonprofit think tank that specifically works in the field of environmental impact. It was the organization that exposed Volkswagen’s fuel emission scandal. 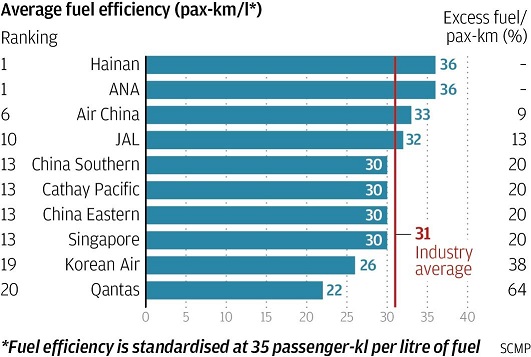 Research from ICCT shows that Qantas burns the most carbon of other major airlines in the Pacific region as it used four-engine planes on those routes, such as the Boeing 747 and Airbus A380, which consume more fuel than twin-engine planes. Another reason why the airline wasn’t quite as efficient is because it did not carry passengers to its full capacity. On an average around 74% of the seating capacity was filled.

Hainan and ANA have been ranked the most fuel efficient in the region. Hong Kong based Cathay Pacific lagged behind peers in fuel efficiency on an average. The study is based on 20 carriers that operated in 2016.

Co-author and aviation expert Dr Dan Rutherford said, “The average flyer has very little information about the carbon footprint or the environmental performance of airlines. There's a big gap in fuel efficiency on trans-Pacific flights, this leads to excess carbon emissions and we really hope that people start to think about this as they make their travel decisions. There’s a reason airlines around the world are starting to avoid very large aircraft like the 747 and A380. Newer twin-engine widebodies provide the payload and range capabilities needed for transpacific flights with much lower fuel burn.”

Brandon Graver from ICCT, the lead author of the study said that the research highlighted ways in which major carriers could reduce their carbon emissions. He noted, “This research shows that there are a variety of ways that international airlines can reduce fuel use and carbon emissions. Buying new aircraft, carrying large numbers of passengers and optimizing freight strategies all make a difference.”

Alan Milne, head of fuel and environment at Qantas has remarked on the study noting, “We’re committed to reducing carbon emissions and continually look at ways to lower them across our operations. We are switching our 747s for more fuel-efficient Dreamliners and we have several data-driven programs in place to reduce fuel burn.”

Greenhouse gas emissions by the global aviation industry makes up about 2.5 per cent of the world's carbon pollution.