After the release of a study that found that plastic particles are prevalent in bottled water, the World Health Organisation announced that it will conduct a public health..

After the release of a study that found that plastic particles are prevalent in bottled water, the World Health Organisation announced that it will conduct a public health review on packaged water. Plastics contain a number of toxins. Recent years have shown an increase in the use of bottled water.

According to the UNEP, plastic is defined as “any synthetic or semi-synthetic polymer with thermo-plastic or thermo-set properties, which may be synthesized from hydrocarbon or biomass raw materials.” Besides polymers, plastic also often contain a number of harmful chemicals, used to alter physical properties such as colour and shape. Other highly toxic pollutants such as pesticides tend to bind to plastic as well.

Commercial use of plastic as we know it today began in the 1950s. Since then, the world has generated 8.3 billion tonnes of plastic waste.

As a result of the widespread use of plastic and consumerist culture, plastic has become a major source of pollution. India alone generates approximately 5.6 million tonnes of plastic waste a year. According to the National Geographic, 91% of plastic is not recycled. According to a study released in 2017, “the vast majority of plastic ever made is still present in the environment in some form” Plastics can take between 500 to 1000 years to degrade, depending on complexity.

The phenomenon of disposal by dumping plastic in oceans is thought to adversely affect up to 700 different forms of marine life. A number of sea birds and fish consume or get entangled in plastic paraphernalia disposed in the ocean, which often results in death. Plastic dumped in the ocean contains toxins such as Biaphenol A (BPA), which enter the food chain and have the potential to adversely affect human health.  As a result, there have been global calls to tackle this issue.

However, the infiltration of plastic does not end in the oceans. In 2017, studies (sponsored by Orb Media, a Washington-based non-profit organisation) revealed that plastic is prevalent in a number of land-based sources of water, including tap water. The study added, “There is evidence that particles may even cross the gut wall and be translocated to other body tissues, with unknown consequences”.

Another recent study conducted at the University of Exeter found that 80% of teenagers have traces of the synthetic BPA chemical, which has been proven to affect hormonal balance in humans. This chemical is thought to leech from plastic containers into food and water. 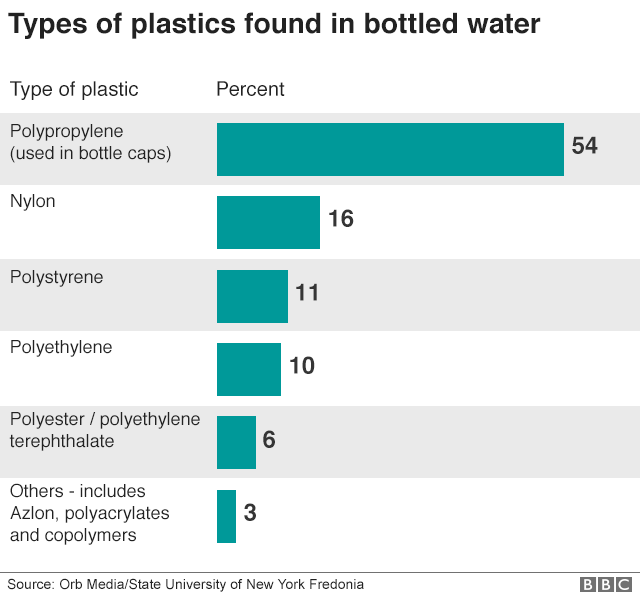 This week, the World Health Organisation announced that it would launch a public health review on bottled water. The announcement came after the release of a world-wide study according to which bottled water may contain “roughly twice as many plastic particles [as tap water]”.

The study was conducted at the State University of New York in Fredonia and was commissioned by Orb Media. 259 bottles were tested across 11 brands, purchased from 19 locations in 9 countries. Nile Red (a dye) tagging was used to identify the micro-plastic particles. The study found approximately 314 micro-particles per litre, and 10 larger particles (the diameter of a human hair) per litre. Only 17 of the 259 bottles tested did not have any particles. One of the brands sampled was India’s Bisleri. Packaged water owned by Nestle, Danone, PepsiCo, Coca Cola, Gerolsteiner Brunnen, Grupo Edson Queiroz, and Hangzhou Wahaha Group was also tested.

The researchers remained uncertain about the health implications of this discovery. Professor Mason told the BBC, "What we do know is that some of these particles are big enough that, once ingested, they are probably excreted but along the way they can release chemicals that cause known human health impacts… Some of these particles are so incredibly small that they can actually make their way across the gastro-intestinal tract, across the lining and be carried throughout the body, and we don’t know the implications of what that means on our various organs and tissues." The study has not yet been formally published in a journal.

WHO water and sanitation coordinator Bruce Gordon said that there are a number of factors the WHO investigation has to consider, including composition, whether the plastic contains any harmful chemicals, and what the effects of the particles could be.

The WHO made it clear that in cases of low-income countries without access to potable water supplies, bottled water is still safer for consumption than local sources. In these countries, waterborne diseases remain a greater threat.

Our assessment is that directly or indirectly, plastic will have serious health implications on the whole of humanity. Recent findings have shown that plastic is far more prevalent in our lives than previously understood. Plastic pollution is an issue that must be tackled in order to control the amount of toxins entering the food chain. Food and water safety legislation may have to be modified, contingent on WHO findings.