One Step at a Time

Mr. Rajeev Khushu is the Chairman of the Board of Directors at India Electronics and Semiconductor Association(IESA). He is also the Director of Corporate Affairs and Government Relations at Texas Instruments.

India has a good ecosystem for semiconductor design. Today, more than 30 per cent of the global design in chips is carried out in this country. In fact, companies like Texas Instruments (TI) have had their presence here since 1985. There is hardly any semiconductor device that TI produces or manufactures which does not pass through India. In many cases, even the product definition and chip specifications happen in Bangalore.

Given this apparent strength in design, it will be relatively easy for the country to enable a fabless ecosystem in the country. There is also great potential for inhouse consumption, owing to its large markets.

Today, China has more than 50-60 fabless companies in the semiconductor domain. This can be attributed to the large amounts of money pumped into this sector by the government. In fact, even before the Covid-19 pandemic, President Xi Jinping had announced that the government would spend an excess of 400 billion dollars in the semiconductor industry.

Recognising the need for such proactive action, the Government of Karnataka has recently developed the Semiconductor Fabless Accelerator Lab (SAFL). This initiative seeks to develop and enhance the fabless ecosystem in Bangalore. Reports suggest that many fabless companies have already emerged out of this project. Owing to this success, the Union government is contemplating similar programmes at the pan-India level.

To sum up, India needs to leverage its strengths in design and direct more funding towards the fabless ecosystem. 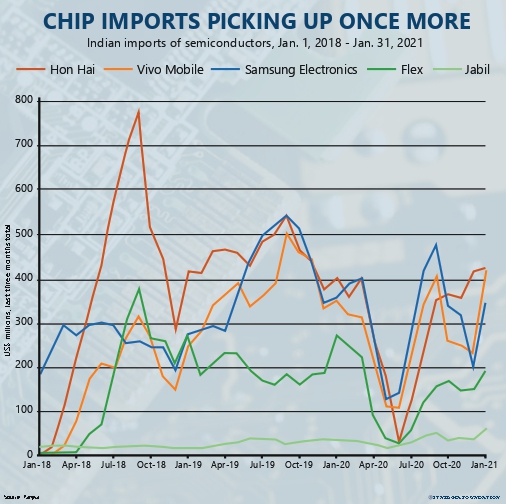 Apart from establishing a fabless ecosystem, the next low-hanging fruit for India would be an Outsourced Semiconductor Assembly and Test(OSAT) or an Assembly, Testing, Marking and Packaging (ATMP) facility. Although countries like Malaysia and Philippines have already taken the lead in this sector, there are critical opportunities that India can capitalise upon.

Over the last year, semiconductors have witnessed an unprecedented surge in demand. In 2020 alone, the industry grew at 8-10 percent. For 2021, the preliminary figures indicate that the growth will be in double digits. With such an escalation in demand, there will be a concomitant increase in the requirement for fabs. This, in turn, can drive up the demand for OSATs and ATMPs, representing a significant entry-point for India.

Currently, Taiwan and other semiconductor majors are moving up the value chain by producing technology nodes below 7nm. Even as they upgrade to a niche fab, there are other countries around the world like India, which continue to have a market for less-advanced chips, particularly in the analogue domain. If these old technology facilities are incentivised to move to India, it will represent a win-win situation for both parties. Chips can be produced in a very cost-competitive and efficient manner.

Alternately, India can become a part of the global semiconductor supply chain, even before transitioning to high-end commercial fabs. In this regard, the India Electronics and Semiconductor Association (IESA) plans to release a white paper over the next couple of months. The paper will demonstrate how Indian companies in the automotive and pharmaceutical sectors can be incentivised to supply raw materials to fabs or OSAT vendors around the world.

The IESA has also engaged in discussions with Orissa and other state governments to examine how rare earths and other minerals can be supplied to fulfil global fab and OSAT needs. After establishing its presence on the global value chain and building confidence among semiconductor fabs, India can ramp up its cooperation with chip manufacturers.

Although India has been attempting to woo chip manufacturers for more than a decade, it has always been constrained by teething troubles. Having learnt from the past, the government has proactively sought to understand what the semiconductor companies require in order to shift to India.

As far as the IESA is concerned, it is working closely with the Government of India to enable a robust policy environment. Apart from cooperating on Production-Linked Incentive (PLI) schemes, it has played an important role in calling for expressions of interest (EoI) from semiconductor fabs around the world. More than 20 companies have participated in this EoI process, with a sizeable number of speciality fabs displaying a keen interest in shifting to India. In this context, the future looks very promising.