North Korea has announced that its plans to strike Guam with four missiles will be ready by mid-August. Guam is a US territory that hosts a large military outpost. In July 2017, North Korea successfully test launched two ICBMs (intercontinental ballistic missile). According to experts, both ICBMs could reach America. The North Korean state..

North Korea has announced that its plans to strike Guam with four missiles will be ready by mid-August.

Guam is a US territory that hosts a large military outpost.

US has condemned the tests and has conducted joint military exercises with South Korea in retaliation. The UN Security Council unanimously imposed fresh sanctions on the country. These sanctions could cut North Korea’s $3 billion annual export revenue by a third.

North Korea has refused to stand down to the calls from the international community. The country’s Foreign Minister Ri Yong Ho recently attended the ASEAN Regional Forum where he argued that it was the US that had brought the Korean peninsula to the “brink of nuclear war”. He also added that

US President Donald Trump has responded to the increased threats by stating, “North Korea best not make any more threats to the United States. They will be met with fire and the fury like the world has never seen.” 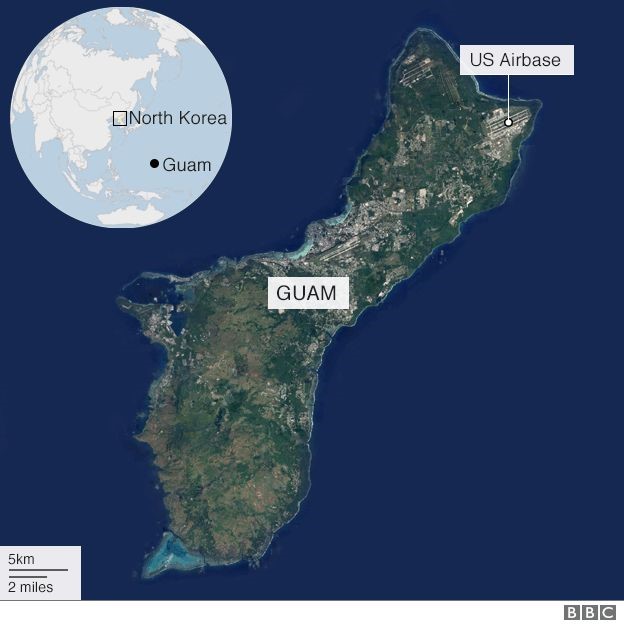 KCNA news agency reported that North Korea was looking to attack Guam (a US island territory) using its domestically made medium-to-long-range Hwasong-12 missiles. Guam currently hosts 6,000 US service members and has a population of over 160,000 people. The territory’s Homeland Security has released a statement that despite the warning from North Korea, Guam is under no real threat.

North Korea, meanwhile, has said that if the country’s Supreme Leader, Kim Jong Un approves of the plan, then the rockets would pass over Japan and land in the sea about 30km from Guam. The Hwasong-12 rockets to be launched by the KPA [Korean People’s Army] will cross the sky above Shimani, Hiroshima and Koichi prefectures of Japan,” the statement said. “They will fly for 3,356.7 km for 1,065 seconds and hit the waters 30 to 40km away from Guam.”

A report from Washington Post has noted that according to an analysis by the U.S. Defense Intelligence Agency, North Korea now has a miniature nuclear warhead that can be mounted on a missile.

US Secretary of Defense Jim Mattis has issued a statement noting, “While our State Department is making every effort to resolve this global threat through diplomatic means, it must be noted that the combined allied militaries now possess the most precise, rehearsed and robust defensive and offensive capabilities on Earth.  The DPRK regime’s actions will continue to be grossly overmatched by ours and would lose any arms race or conflict it initiates.”

Our assessment is that a war between North Korea and the US would also endanger Japan and South Korea. This is an outcome all parties would want to avoid. However, if North Korea follows through on its threat, then de-escalation would be unlikely.  The US military is not in a position right now to strike North Korea with the kind to capability that would be needed to bring battlefield success and would need weeks, if not months, to sort out key issues of logistics. We believe that tens of thousands of US civilians, many of them military dependent, would first need to be evacuated from South Korea.