After nearly two months of silence, North Korea conducted a dramatic launch of its most advanced missile yet. The nation has claimed that this intercontinental ballistic missile..

After nearly two months of silence, North Korea conducted a dramatic launch of its most advanced missile yet. The nation has claimed that this intercontinental ballistic missile was capable of reaching the "whole" US mainland.

North Korea has conducted multiple missile tests in 2017. Here are the sequences of the missiles launched by the nation in this year alone.

April 4, 2017: The isolated nation launched a medium-range ballistic missile. This missile reached the Sea of Japan.

April 16, 2017: In the same month, the country also launched a KN-15 medium-range ballistic missile. This missile however failed immediately upon launch.

April 29, 2017: For the third time in April, another missile was launched from Bukchang in the South Pyeongan province. This one also failed after takeoff.  This launch was timed just hours after a meeting of the UN Security Council condemned North Korean missile and nuclear testing activities again.

July 4th and 28th 2017: The country test launched two intercontinental ballistic missiles. The first one flew for approximately 40 minutes, falling 930 km (580 mi) away from the launch site in the Sea of Japan. The second one reached an altitude of 3,000 km (1,865 mi).

On August 26th, 2017 alone the nation launched three short-range missiles. One of the missiles blew almost immediately after take off but the other two were deemed successful.

In September 2017, fired a Hwasong-12 rocket over a missile flew over Japan. The missile was fired from near the nation’s capital, Pyongyang and reportedly travelled a distance of more than 2,700km. It reached an altitude of about 550km. It flew over Erimomoisaki on the Northern Island of Hokkaido before falling into the Pacific Ocean. It broke into three pieces and fell into North Pacific Ocean – 1,180km from the Japanese coast. 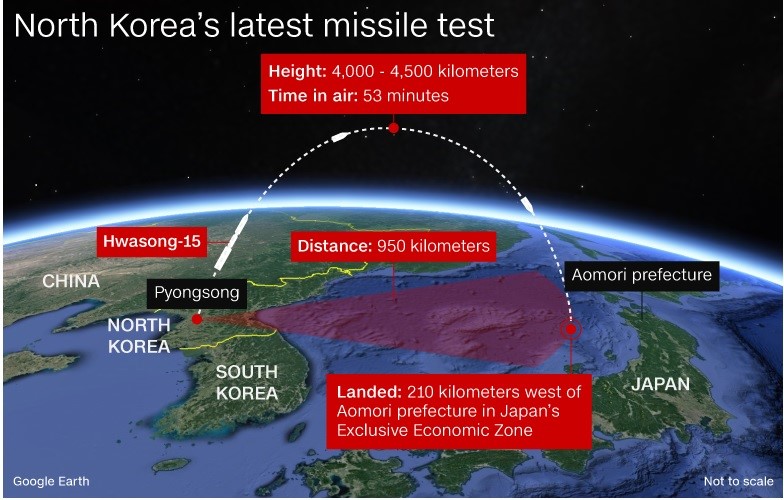 After nearly two months of silence, North Korea conducted a dramatic launch of its most advanced missile yet. The nation has claimed that this intercontinental ballistic missile was capable of reaching the "whole" US mainland.

The Hwasong-15 missile reached an unprecedented height of almost 4,500 kilometers (2,800 miles). The Hwasong-15 is a new type of intercontinental ballistic missile. It was fired at 3am from North Korea and ultimately crashed in the Japanese coast. It crashed within Japan’s Special Economic Zone.

“It went higher, frankly, than any previous shot they’ve taken,” James Mattis, the US defence secretary, told reporters. “It’s a research and development effort on their part to continue building ballistic missiles that can threaten anywhere in the world.”

“The missile was launched from Sain Ni, North Korea, and travelled about 1,000 km before splashing down in the Sea of Japan, within Japan’s economic exclusion zone. We are working with our interagency partners on a more detailed assessment of the launch,” Pentagon spokesman Col Robert Manning said.

David Wright, a physicist and missile expert at the Union of Concerned Scientists, has stated that missile would have a range of 13,000 km, enough to reach Washington, the rest of the US west coast, Europe or Australia. He said, “Such a missile would have more than enough range to reach Washington, D.C., and in fact any part of the continental United States. We do not know how heavy a payload this missile carried, but given the increase in range it seems likely that it carried a very light mock warhead. If true, that means it would be incapable of carrying a nuclear warhead to this long distance, since such a warhead would be much heavier.”

Japanese officials said the projectile travelled for about 50 minutes - but did not fly over Japan. Japan also said it would "never accept North Korea's continuous provocative behavior.”

US President Donald Trump who has been highly critical of North Korea and has in the past slung insults at its leader, Kim Jong Un said, We will take care of it ... it is a situation that we will handle.”

Our assessment is that the latest missile indicates that US President’s harsh rhetoric has not been successful in silencing North Korea’s actions. The latest missile, which was its biggest one yet, not only threatens the security of US but also other nations that fall under its trajectory. The international community, despite UN sanctions, has also been unsuccessful in curbing North Korea.